Leaving No Status Behind on Endangered Species Day

Leaving No Status Behind on Endangered Species Day

Signed into existence in 2006 by the United States Congress to be recognized on the third Friday of May annually, Endangered Species Day is a celebration of the nation’s wildlife and wild places in its simplest form. For the stewards of discovery at NRI, it's an opportunity to reflect on the research balancing at the nexus of national security, conservation, and healthy working lands. Not just today, but every day, we look to strengthen wildlife conservation, to keep working lands sustainable and at the same time support military training and readiness.

At the heart of the Endangered Species Act (ESA) is a safety net for our nation’s wildlife, fish and plants on the brink of extinction. The Act protects thousands of endangered species and millions of acres of habitat. Insightfully revealed by NRI's Wildlife Conservation and Mitigation Program Director Mike Brennan, too often we read about species-related crises and conflict, while success stories go relatively unpublicized and uncelebrated. While the ESA is frequently portrayed as a draconian, command-control approach to wildlife conservation, that portrayal isn’t always true, and it certainly does not need to be. Indeed, the ESA works most effectively when its requirements never come into play because it spurs proactive conservation actions among federal, state, and private sector stakeholders, including the private landowners who manage more than 95% of Texas lands. The successes of the gopher tortoise, the greater sage grouse, and others are examples of the flexibility and creativity that can be employed under the ESA.

Flexibility. Creativity. Collaboration. Words inspired by Brennan's notes that thread continuously through the endangered species-focused efforts our research scientists and engagement specialists resolve to leave better than the status with which it was found. Through species status assessments (SSAs), the science backbone determining listing, delisting and downlisting decisions for species under the ESA, and innovative solutions working to accomplish species conservation, our teams develop necessary and revolutionary policy every year.

At the end of the day, it's critical to conserve key habitats and populations, but the beauty of taking on this great responsibility is the opportunity to connect and work with private landowners, communities, industries and the military. There is a balance and it can be achieved.

In celebration of this day of recognition for the endangered species still in the wild, we collected the good news that's come about in the last few years as a result of their resilience and patience with humankind.

In the high plains of eastern New Mexico, a lesser prairie chicken struts through a patch of clipped buffalograss actively seeking a mate. He ruffles his feathers and booms out his signature call, turning the heads of the surrounding females and securing his chances. Courting never looked so good. Read more...

While many people try to avoid snakes, a group of researchers are doing everything they can to find snakes, specifically the rare Louisiana pine snake. The nonvenomous, 6-foot-long snake lives in gopher burrows, coming out only to go from one burrow to another or to mate. Its only habitat is the longleaf pine savannahs in eastern Texas and western Louisiana. But today, that habitat is almost gone, said Dr. Toby Hibbitts, a researcher at the Texas A&M Institute of Renewable Natural Resources (IRNR) and curator of amphibians and reptiles at the Biodiversity Research and Teaching Collections at Texas A&M. Read more...

Mixing livestock and game species management has been the focal point for many people, but endangered species listings further compound management challenges by placing restrictions on what private landowners can and cannot do with habitat for these species that may be present on their land. With over 100 species currently being considered for listing in Texas under the Endangered Species Act (ESA), it is imperative landowners become increasingly aware of issues related to rare species. Many people are unaware that managing for game species is often good management for endangered or rare species. Read more...

Protecting military readiness and the gopher tortoise at the same time

A first-in-the-nation conservation plan, crafted by the U.S. Department of Defense, U.S. Fish and Wildlife Service (USFWS) and wildlife agencies in Alabama, Florida, Georgia and South Carolina, protects at-risk gopher tortoises while helping military bases to continue training and testing missions across the tortoise’s Southern turf. The Gopher Tortoise Conservation and Crediting Strategy — think of a savings account where the military can make deposits now (tortoise credits) that will be available for future use — was recently officially unveiled at a ceremony in Tifton, Georgia, near the Alapaha River Wildlife Management Area (WMA), Georgia’s newest WMA. Read more...

In the last three years, DoD, USFWS, and state governments within the range of the Eastern population of gopher tortoise have worked together to develop the Strategy to provide a net conservation benefit to the species. The gopher tortoise is a candidate species for protection under the Endangered Species Act (Act) in its Eastern range. The Strategy represents a new tool available for natural resource managers by which military installations in the Eastern range can implement conservation actions that can be used to offset impacts to the gopher tortoise if the species becomes listed in the future. Read more...

Habitat loss, invasive species, disease, overexploitation, pollution—these are just a few of the many threats that species face in their fight for survival and that conservationists try to manage for in their efforts to protect and conserve species.  When species are so rare that they are only found in one place on Earth, conservation efforts can be relatively straightforward. Read more...

A team of Texas A&M AgriLife scientists led by Dr. Charles Randklev in Dallas now works alongside collaborators from Laredo Community College and the Illinois Natural History Survey to better understand the species’ ecology and taxonomy. Their goal is to identify contributing factors to the Texas hornshells’ decline and provide data to the U.S. Fish and Wildlife Service and Texas Parks and Wildlife Department to aid in its protection and recovery.

What can the gopher tortoise teach us about endangered species conservation?

Mike Brennan, director of the Wildlife Conservation and Mitigation Program at Texas A&M Natural Resources Institute gives insights on the Endangered Species Act and candidate species policy and conservation in a new article titled “Lesson from a Tortoise.”

Researchers studying the impact of small mammals on cave habitats with endangered invertebrate species got a prickly surprise when they discovered large numbers of porcupines parading in and out of dozens of caves in the San Antonio area.

NRI’s mussel research team recently published an article on their work in the Rio Grande basin, an area most easily identifiable as the south west border of Texas. This river basin is unique beyond its iconic role in the state’s silhouette, as it falls in an arid and semi-arid region that harbors one federally endangered unionid mussel the Texas Hornshell (Popenaias popeii), plus two other mussel species the Salina Mucket (Potamilus metnecktayi) and Mexican Fawnsfoot (Truncilla cognata), which are also being considered for listing under the U.S. Endangered Species Act. Another significant characteristic of this area is the large and growing human population, a topic I personally find intriguing given my ties to our Texas Land Trends project. 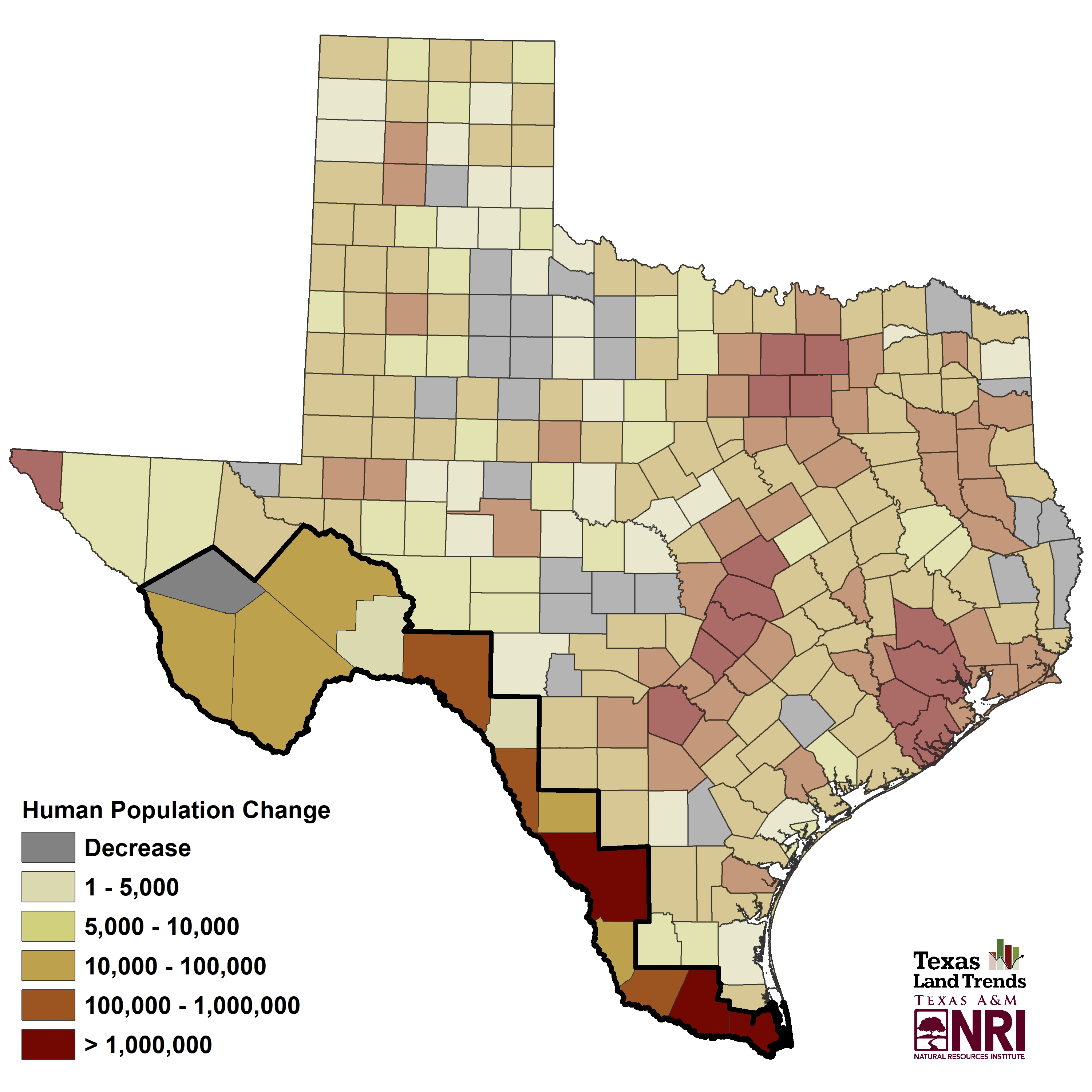 Cowbirds are known for an interesting behavior known as obligate parasitism. Rather than building her own nest, a female cowbird will lay eggs in the nests of other bird species (over 225 documented host species) and hope the new foster parent will not notice or be able to push the egg out. While the inclusion of another mouth to feed seems insignificant, the resident chicks are often greatly disadvantaged, as cowbird chicks can have a faster incubation and development time which allow them to outcompete their "siblings" for resources. This problem is compounded when you consider that the average cowbird can lay around 40 eggs throughout the breeding season, while many of its unsuspecting foster parents lay as little as 3-4 eggs in the same period. Texas songbirds such as the endangered golden-cheeked warbler (GCW; Setophaga chrysoparia) and the recently delisted black-capped vireo (BCV; Vireo atricapilla) have felt the pressure of cowbird nest predation over the past few decades, further exacerbating stress caused by habitat fragmentation and loss.

Longing for Longleaf: A Tale of Forest Restoration

Several SERPPAS partners appear in the Fall 2018 edition of The Longleaf Alliance’s The Longleaf Leader, “Longing for Longleaf: A Tale of Forest Restoration.” The article focuses extensively on how partnerships between conservation groups, state and federal agencies, and private landowners are working together to restore an important endangered ecosystem, as well as why this successful model of cooperation can be used for other at-risk habitats. 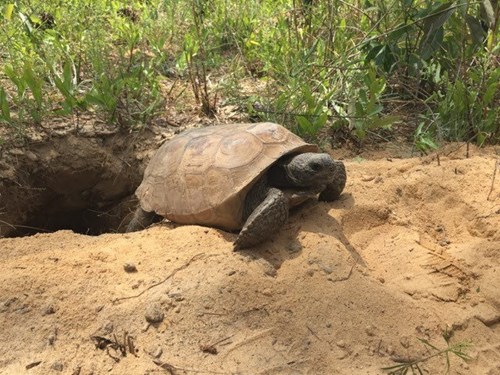 As a project specialist for the Texas A&M Natural Resources Institute, Brittany builds strategies and works with our Institute partners to grow recognition for our research and products while building on fundamental Insti…