Brown-headed cowbirds (Molothrus ater) are a common species of blackbird that are found throughout Texas year-round. Historically, these birds followed herds of grazing animals like the American bison (Bison bison) through short-grass prairies. They later expanded across the nation as human settlements brought agriculture and domesticated livestock herds. 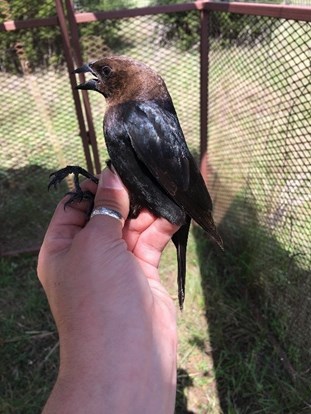 Cowbirds are known for an interesting behavior known as obligate parasitism. Rather than building her own nest, a female cowbird will lay eggs in the nests of other bird species (over 225 documented host species) and hope the new foster parent will not notice or be able to push the egg out. While the inclusion of another mouth to feed seems insignificant, the resident chicks are often greatly disadvantaged, as cowbird chicks can have a faster incubation and development time which allow them to outcompete their "siblings" for resources. This problem is compounded when you consider that the average cowbird can lay around 40 eggs throughout the breeding season, while many of its unsuspecting foster parents lay as little as 3-4 eggs in the same period. Texas songbirds such as the endangered golden-cheeked warbler (GCW; Setophaga chrysoparia) and the recently delisted black-capped vireo (BCV; Vireo atricapilla) have felt the pressure of cowbird nest predation over the past few decades, further exacerbating stress caused by habitat fragmentation and loss. 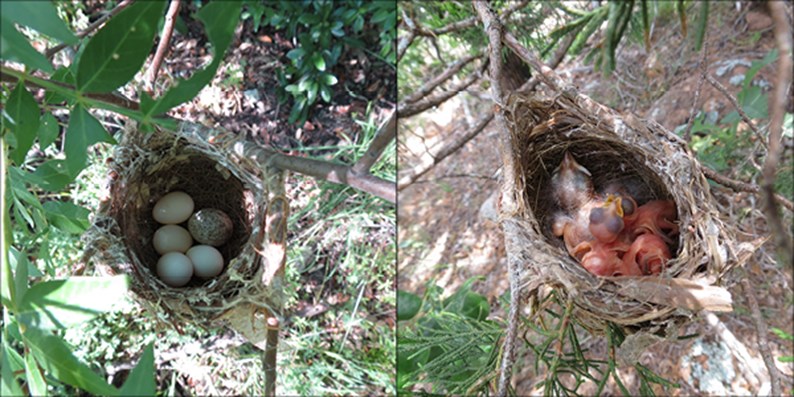 One of the most effective strategies for reducing cowbird impacts on songbird populations is through cowbird trapping in the spring, when songbirds begin to lay eggs. The Kostecke et al. study (2005) found success in this action at Fort Hood, TX where an 80% reduction in nest parasitism on songbirds was observed in a matter of three years. NRI has a long history of implementing this effort, and currently NRI Research Associate Stephanie Martinez is teamed up with military Natural Resource staff to assist in cowbird trapping on installations in the San Antonio area. The basic strategy of this control method is to place traps (designed to allow birds to fly in but not out) in clearings surrounded by trees or other dense vegetation, a habitat type attractive to cowbirds. The traps are checked daily for captures and to refill food and water supplies. Non-target species are released, while cowbirds are humanely euthanized. When possible, euthanized birds are donated as a food source to raptor education centers or given to natural history and science museums for educational or research uses. 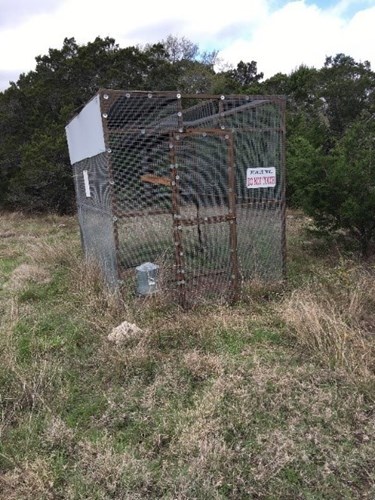 An interesting twist to cowbird management is that this species is actually protected under the Migratory Bird Treaty Act. Landowners should therefore be aware that it is against the law to remove cowbird eggs from a nest and trapping can only be done with proper certification. This requirement should not deter concerned land managers, as Texas Parks and Wildlife Department (TPWD) offers a no-cost training course and certification along with guides to building traps and successfully implementing this management tool. 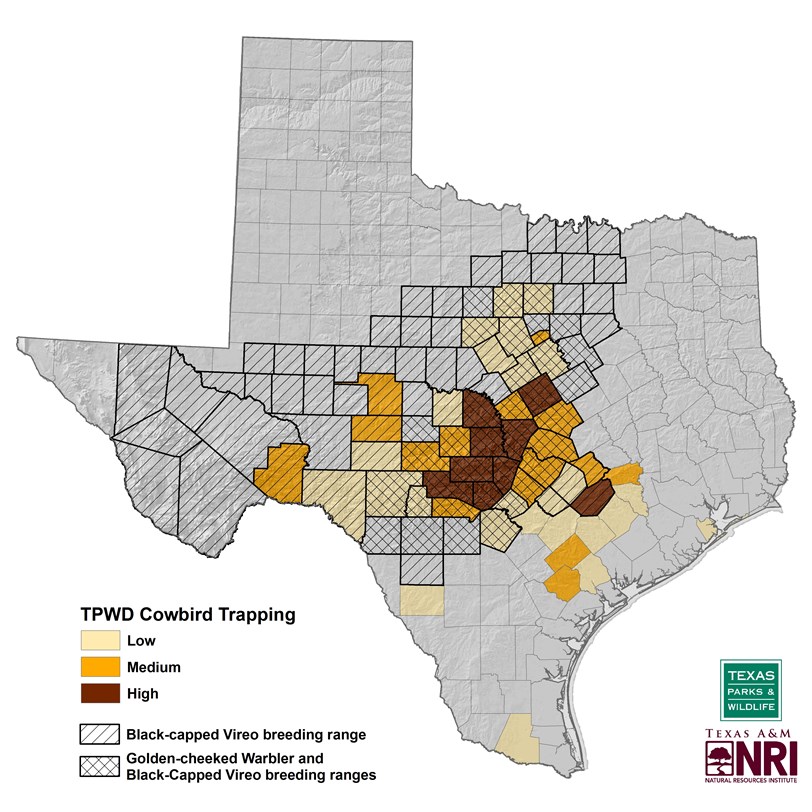 This month’s highlighted map describes the breeding ranges of GCW and BCV overlaid with TPWD’s cowbird trapping program data. This program has initiated trapping efforts in approximately 50 counties since 2005, and led to the successful harvest of over 140,000 cowbirds to date. The map links the highest capture rates to areas vital for the nesting of both GCW and BCV. It is important to note this management tool does not have a significant negative impact on cowbird populations, but simply relieves parasitism pressures in key areas where songbirds are nesting. Brown-headed cowbirds are a unique species that, with proper management, can still thrive without excessive harm to populations of Texas songbirds.

Stephanie Brewer is a research associate for Texas A&M Natural Resources Institute. She currently supports the conservation of nationwide declining, threatened and endangered species by working with the U.S. Fish and Wild…

Kevin Skow provides mapping support and serves as the lead for several projects within the institute. He conducts analysis and data management and supports other needs focused on natural resource issues.

Before joining NRI i…