Wild quail face a long and varied list of challenges to their daily and long-term survival. While some perils are easily identified—a predator raiding a nest, a lack of vegetative cover for nesting, or a sweltering summer day—others, like diseases and parasites, are more subtle. Still others are even less tangible than that; to observe them, you have to dive into the gene pool. Genetic diversity is a topic not often addressed when discussing ways to help quail, but given its role in determining the fate of populations, perhaps it should garner more consideration. 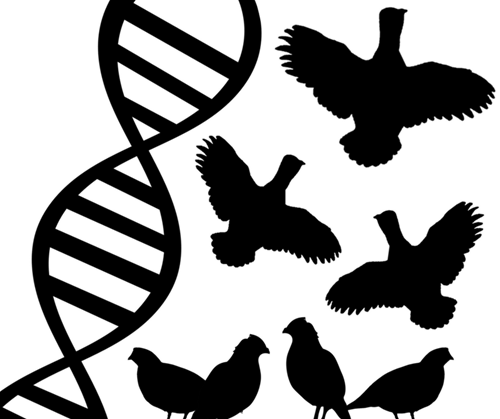 Genetic diversity can be succinctly defined as the variety of genes that exist within a population (National Biological Information Infrastructure 2011).  As an example, imagine a herd of wild horses with individuals of many coat patterns and colors: there are bays, buckskins, paints, appaloosas, palominos—whatever your preference is, this herd has it! It’s easy to see here that the genes which control coat color occur in many different forms within this population. The herd’s genetic diversity, at least with regards to this one characteristic, appears to be quite high. While this is a simplified example and it should be noted that many physical characteristics are controlled by multiple genes, the principle remains the same.

There’s a lot more riding on genetic diversity than simply an animal’s color, and in fact this concept can make or break a population. Genes that affect all kinds of other traits—everything from immune system response and fertility to predator avoidance behaviors—may vary between individuals. Some genes are more useful for survival than others, and their utility may change over time. Consider a population where a few individuals are resistant to a particular disease. That resistance may not be especially helpful under normal conditions, but if an outbreak of the disease occurs, those with the resistant genes will have better odds of survival. Genetic diversity within a population is crucial to its long term survival, as it increases the chances that some of its members are able to deal with challenges as they arise, allowing the group to persist into the future. 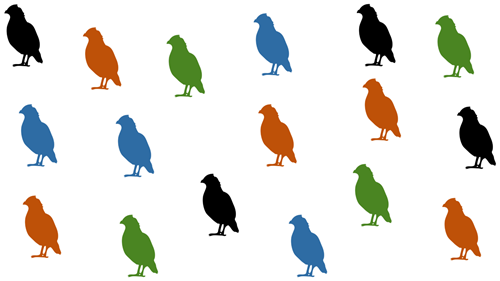 In this population, different colors represent different genetic profiles. The red birds are highly resistant to a particular disease. 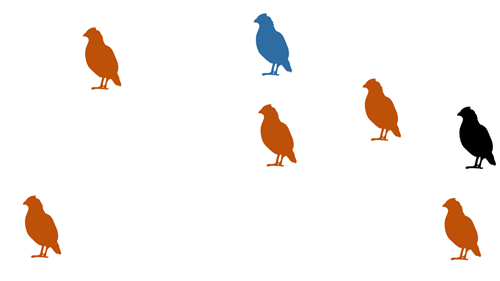 Following an outbreak of the disease, only the red birds and a few lucky individuals of other genotypes survive. If the population had consisted entirely of one of the other colors, i.e. lacked genetic diversity, this disease likely would have wiped it out.

Quail populations are no different from others when it comes to the need for diverse genes. What is different, though, is the number of factors at play that can potentially influence bobwhite population genetics, which include both natural forces and human activities. It might even be said that quail are disadvantaged in that department by default: birds generally have less genetic diversity than other types of animals (Avise et al. 1980) and galliforms (quail, turkey, and chickens) have less relative to other birds (Gutierrez et al. 1983). The sedentary habits of bobwhite quail may also be cause for concern. We know that a bobwhite’s home range is typically one square mile or less (Lohr et al. 2011), which might imply that populations can easily become isolated due to distance. Isolation means fewer individuals in the breeding pool, which in turn means less genetic variability.

However, according to research examining the population genetics of bobwhites in Illinois, distance may not be as isolating as we might assume. There was relatively little genetic differentiation between wild populations examined, meaning there was enough overlap that they were able to mix, mingle and swap genetic information to some extent. Additionally, what little differentiation there was could not be attributed to distance—groups of birds that were near enough to mix simply did not due to some other isolating factor (Berkman et al. 2013). Habitat fragmentation is labeled as a likely culprit, as stretches of uninhabitable space (e.g., a road, an overgrazed pasture, a dense stand of forest) may separate quail populations even if they are geographically quite close.

But of course wild bobwhite populations are not only influenced by their own mixing; there’s also the introduction of pen-raised birds to consider. It may seem like a moot point, especially in Texas where all evidence points to the fact that pen-raised quail last no more than a few months in the wild (Perez et al. 2002) and rarely manage to breed. We do know, however, that survival rates for captive birds are surprisingly high elsewhere in the bobwhite’s range (Evans et al. 2009) and that these birds can and do breed with wild quail (Berkman et al. 2013, Evans et al. 2009). 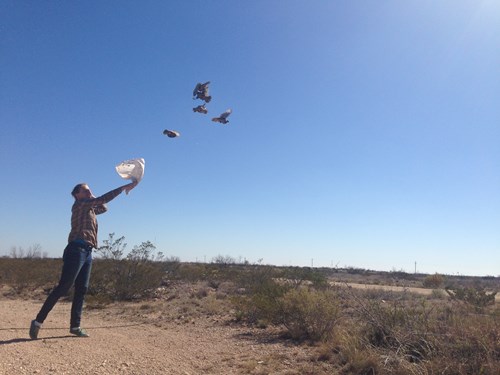 People choose to raise and release quail for a variety of reasons. Photo courtesy of Becky Ruzicka.

The results of those pairings are mixed. We just explained that a smaller breeding pool equals less genetic diversity, so increasing the breeding pool with pen-raised individuals should help, right? Although captive breeding populations are not necessarily plagued by severe inbreeding, as we might fear, by some measures they do exhibit less genetic variation than their wild counterparts (Ellsworth et al. 1988, Evans et al. 2009). On top of that, their genetic makeup is shaped entirely by artificial pressures, whereas the genetics of wild birds are molded by the challenges they face each day (Hernández et al. 2013, Evans et al. 2009). Consider the traits a quail breeder might select for in his stock: larger birds, birds that are less inclined to run, birds that grow well on artificial feed— although good for production, these traits may not be conducive to long term survival of the species.  Slow and heavy birds seem ill-adapted to life in the wild.

In Texas, it’s difficult to say how many birds are released in attempts to bolster wild populations, as most of this activity occurs on private lands. Despite the abysmal survival rates for pen-raised birds, some may reproduce in the wild—that is often the end goal of such efforts, after all. On top of the genetic implications, pen-raised birds can affect wild populations in other ways: they may transmit disease, push wild birds out of their territory, or attract more predators to an area (Hernández et al. 2013). It’s not all bad news, as releasing pen-raised birds to hunt can relieve hunting pressure on the wild populations (Hernández and Guthery 2012), but the potential for negative impacts should not be ignored.

So what does all this mean for wild quail? First, lack of genetic diversity has not been identified as a major contributing factor to the decline of quail (Berkman et al. 2013). However, the potential for habitat fragmentation to isolate populations and create or exacerbate genetic issues is concerning, especially as Texas lands continue to be divided into increasingly smaller parcels (Texas A&M Natural Resources Institute 2017). It’s also worth noting that the extent to which genes determine a quail’s survival instincts and how much is a product of upbringing (the age-old “nature vs nurture” debate) is not well understood (Ellsworth et al. 1988). While releasing pen-raised birds does carry risks, they can also be useful supplements during hunting season, especially in large-scale commercial operations (Hernández and Perez 2007). Whether the benefits of release outweigh the drawbacks is a decision that individual land stewards will have to make for themselves.