When I selected this month’s map, I can’t say I had thought much about freshwater mussels (aka unionids) in recent years. Growing up, I remember learning about their ability to “filter” or clean our lakes and rivers, as well as their muscular “foot”, used to pull themselves around the bottom of the waterbody, and of course the short-lived “great pearl rush” of the early twentieth century at Caddo Lake. This blog opportunity gave me the chance to learn a few other important facts about this seldom seen group of animals; like the role they play in food chains for many terrestrial and aquatic animals, how they provide habitat for many aquatic species, their anchoring ability that helps to stabilize lake and stream bottoms, and their role as an indicator for riverine health. 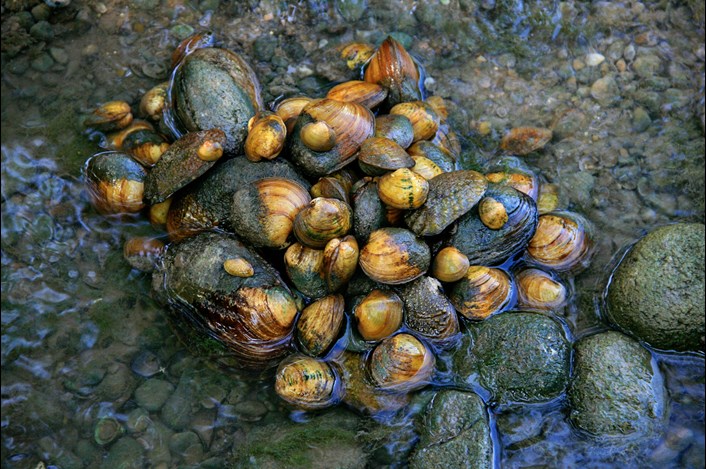 NRI’s mussel research team recently published an article on their work in the Rio Grande basin, an area most easily identifiable as the south west border of Texas. This river basin is unique beyond its iconic role in the state’s silhouette, as it falls in an arid and semi-arid region that harbors one federally endangered unionid mussel the Texas Hornshell (Popenaias popeii), plus two other mussel species the Salina Mucket (Potamilus metnecktayi) and Mexican Fawnsfoot (Truncilla cognata), which are also being considered for listing under the U.S. Endangered Species Act. Another significant characteristic of this area is the large and growing human population, a topic I personally find intriguing given my ties to our Texas Land Trends project. 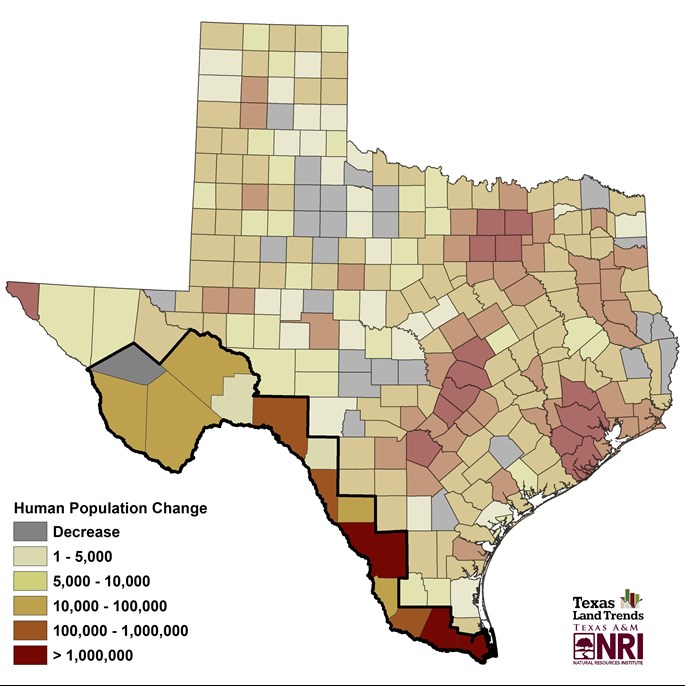 So, what does a river basin, three mussel species, and a large human population have to do with one another? A lot more than you may think. After doing a little research, I learned that habitat loss (due to a few factors such as climate change and environmental degradation) and its effects on appropriate living conditions has been a likely contributor to mussel declines across Texas. Considering these species must gather (i.e., siphon) their food and oxygen from water, and use their aquatic neighbors (e.g., fish and amphibians) in the reproduction process, it is easy to see the connection between water conditions and the success of unionids. The magnitude of distress that human activities place on unionids has yet to be fully determined, but consequences of increased water demand, altered stream flow (e.g., dams), changes in thermal regimes of rivers, and point and non-point source pollution are certainly contributing to the decline in aquatic biodiversity and ecosystem functions. 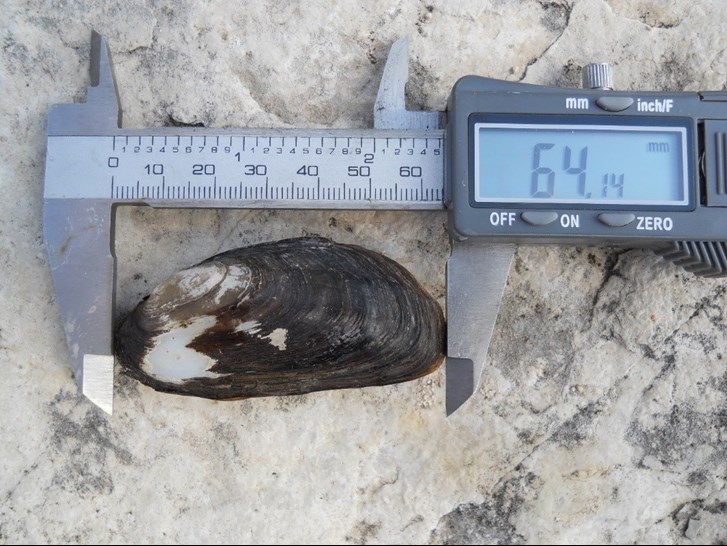 One of the three live Texas Hornshells (P. popeii) found during surveys the Pecos river.

In the NRI study our scientists assessed the conservation status of the three aforementioned mussels within the Rio Grande, specifically examining occupancy and detection probabilities, range curtailment, and contributing factors to their decline. Our map of the month highlights some of the findings from this study, comparing the current range and predicted occupancy of the Texas hornshell. What is most striking about the map (B) is the apparent reduction in occupancy in relation to the proximity of large-scale human activities, such as dams and major urban centers. This may be no surprise as habitat conditions (e.g., water quality and quantity) are impacted often times from these types of activities. With limited water options in this region, addressing concerns about water sustainability and mussel health appear to be challenging. 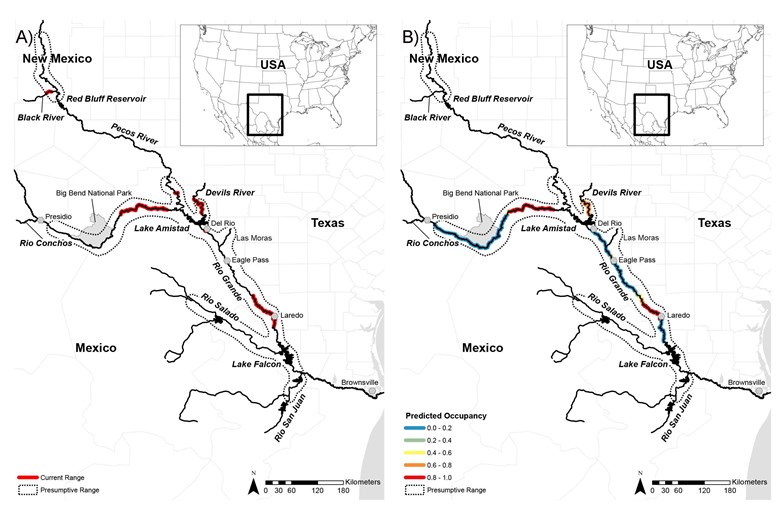 Maps for Texas Hornshell (P. popeii): (A) comparing current range and (B) predicted occupancy. * Current range is based on known presence data of live individuals from 2011 to present.

But wait, there’s hope! In recent years, strides have been made to fund research of unionids to better understand their traits and ecology. With reliable, science-based data informed solutions can be made by state and federal natural resource agencies to better manage and conserves these important species. This effort, however, can only be successful if furthered by our own actions. Here are a few ways we can help to promote and protect fresh water mussel health in our state: