Historically, longleaf pine ecosystems were the dominant forest type across the southeastern United States. Changes in land use catalyzed by economic and population growth, an increase in demand for rural land and the subsequent incentive to subdivide or sell created this process for fragmentation and land conversion leaving us with less than 5 percent of the once sprawling legacy of longleaf stands.

We are now tasked with—or rather endeavor to—restore the awe of the powerfully cascading forests that provided habitat for wildlife, clean air and water for surrounding communities, economic opportunities for landowners and land infrastructure for military readiness near testing and training facilities.

Through a partnership between the Texas A&M Natural Resources Institute and the Texas Longleaf Taskforce, a counterpart of the America’s Longleaf Restoration Initiative working to restore longleaf pine ecosystems on private and public forestlands in Texas, the Landowner Longleaf Challenge launched in March of this year. Beginning as a small idea, this campaign was rooted in modern outreach by digitally sowing seeds and pruning back the many opportunities that come with social media as a means to identify the critical factor in this race against time to reverse the longleaf ecosystem decline—private forest landowners.

The campaign appeared in the Facebook feeds of 96,000 targeted landowners and residents in eastern Texas who showed indications of interest in land management assistance and longleaf restoration. The landowners who were curious about the opportunity to connect with teams of natural resource specialists for cost-share and technical information, after a series of brief questions, voluntarily submitted their contact and land information through a form the taskforce created, alerting our team with each submission. 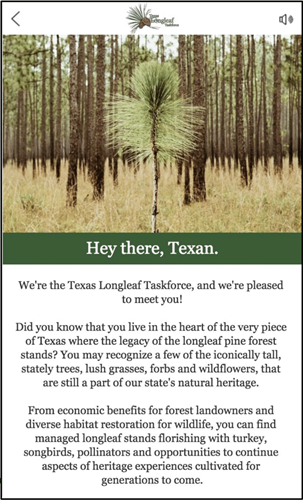 Launching this campaign, even with limited resources, yielded an awareness momentum over the course of 5 months that cannot be rivaled through traditional practices. The taskforce was empowered to assess the efficacy of new digital outreach methods, and to compare the real return on investment, developing a model of resources to restoration. By the end of the campaign, the taskforce garnered over 80 previously unengaged leads from landowners specifically stating which resources would be most beneficial to them.

As we analyzed the data during the campaign, we acknowledged that not all connections will lead to more acres restored, but we could not understate the potential of the 625 interactions between our team, specialists and landowners. This is hard work outliving the myth that forest landowners are lacking resources and contacts to guide them through the process to longleaf restoration.

Building and strengthening relationships with a network of well-informed landowners is the foundation to a more resilient outreach program and longleaf restoration efforts. Furthermore, this initiative cultivated a community of forest landowners looking to preserve heritage, working land forests, wildlife habitat and biodiversity within the longleaf pine ecosystem—landing on a win-win.