Why Don't Pen-raised Quail Survive in the Wild?

Why Don't Pen-raised Quail Survive in the Wild?

The history and practice of releasing pen-raised quail is almost 100 years old. It began in the 1930s as an attempt to bolster declining populations throughout the southeastern U.S., and the practice was attractive to both wildlife biologists and landowners searching for a simple fix to the quail problem.  Tens of millions of pen-raised quail were released by state wildlife agencies, with some even building their own hatcheries in the belief that it would take many years for wild populations to recover (Gerstell 1938, Anonymous 1942, Hernández et al. 2012, Whitt et al. 2017).

However, it soon became apparent that no matter how many quail were released, their survival rate across most areas and habitat types within their U.S. range was abysmally low (Buechner 1950).  In a radio-telemetry study in south Texas, researchers found that half of their pen-raised birds perished only 9 days after release; by 12 weeks, all of them had died (Perez et al. 2002).  But why don’t these pen-raised quail last in the wild?  There are two main theories—let’s explore each further.

An example of a state quail hatchery. Photo: California Department of Fish and Wildlife.

One theory is that pen-raised quail are not as genetically vigorous as their wild counterparts due to inbreeding.  Research has shown this is not the case.  A study conducted by Ellsworth et al. (1988), found that the genetic variability in pen-raised bobwhites was not notably deficient, and they did not display high levels of inbreeding compared to wild quail.  But even if pen-raised birds are not lacking genetic diversity, could wild quail have some unknown genetic advantage?  Two studies examined this question by crossing pen-raised quail with wild ones, producing what is known as F1 offspring, and comparing their survival to purebred pen-raised quail.  Both studies found that the survival rates of F1 and pen-raised birds were almost identical (Roseberry et al. 1987, Perez et al. 2002).  It seems there is little evidence for genetic differences causing low survival in pen-raised birds. 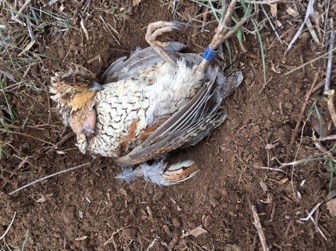 Another theory is that being raised in captivity means pen birds do not develop the necessary behaviors and survival skills essential for life in the wild.  Reports of pen raised quail post-release indicate that they may be found in relatively open cover and remain easily approachable even after 5-10 weeks in the wild (Roseberry et al. 1987).  They also display unusually sedentary behavior and do not appear to disperse far after their release.  For example, Roseberry et al. (1987) found that the majority of both F1 and pen-raised birds were captured within 250 meters of their release site; the second year, the majority of both groups were captured within 50 meters.  This behavior can be lethal for birds that should be on the move looking for food and avoiding predators.  There is also potential for predators to stake out these release sites for an easy meal, if the same places are used frequently; further research is needed to confirm if this is the case (Hernández and Perez 2007). 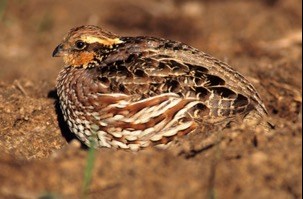 Sedentary behavior is one factor that contributes to diminished survival in pen-raised quail. Photo: Herbert Lange

There have been several studies comparing the behavior of pen-raised quail after they have been released to that of wild quail, starting with their flight patterns. Research has shown that pen-raised quail are often reluctant to fly when approached (Roseberry et al. 1987) and when they do fly they have poor flight speeds (Perez et al. 2002).  In one instance, researchers measured the flight speeds and distances of wild vs pen-raised bobwhites and found a significant difference between the two groups (Perez et al. 2002).  Wild birds had an average flight speed of 27-28 mph (43.5-45 kilometers per hour), whereas pen-raised birds had an average flight speed of 18-19 mph (29-30.5 kph)—an almost 10 mph (15 kph) difference!  They also found that pen-raised bird flight distances were, on average, 107 feet (32.5 meters) shorter than wild birds.  The combination of reluctance to fly, slower flight speed, and shorter flight distance might make pen-raised birds less effective at escaping predators in the wild. 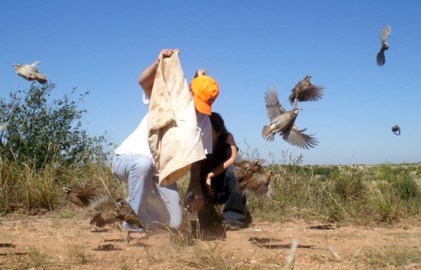 While quail may be relatively easy to raise in captivity, research strongly indicates that these pen-raised birds are not well suited to survive long-term in the wild. The answer to “why” is most likely a combination of poorly developed flight abilities, sedentary behavior and lack of predator avoidance to name a few.  Releasing pen-raised quail can still be useful as a way to supplement hunting activities, but as of right now, it is not a viable way to replenish wild populations. In addition, research has shown that releasing pen-raised birds can decrease the survival of wild quail around the release site as more avian predators are attracted to these areas (Sisson et al. 2000).  It is far better to invest time and money in improving and managing quail habitat, as the high reproductive rates of wild bobwhites, if currently present in the area, can restock an area naturally with good habitat and favorable conditions (Cathey et al. 2007).

For more information on how to improve your quail habitat and populations, check out resources from the Texas A&M Quail Decline Initiative, our Youtube channel or for technical assistance contact Extension Associate Amanda Gobeli through email at agobeli@tamu.edu or phone at (325) 653-4576.

Anonymous. 1942. The propriety of attempting to restore bobwhite quail in Texas by raising the quail in pens for release in the wild. Austin: Texas Game, Fish

Gerstell, R. 1938. An analysis of the reported returns obtained from the release of 30,000 artificially propagated ringneck pheasants and bobwhite quail. Transactions of the North American Wildlife Conference. 3:724-29.