One day after retiring from 33 years of service to AgriLife, the wildlife specialist and quail ecologist started working part time for AgriLife Extension leading the statewide “Reversing the Quail Decline” initiative.

His partial retirement allowed him to expand his role at the Rolling Plains Quail Research Foundation, a privately funded ranch near Roby dedicated to quail science and conservation.

Last August, Rollins finally “re-retired” from AgriLife. When he received a letter from the Texas A&M Board of Regents this summer informing him that he had been awarded the rank of professor and Extension specialist emeritus, he said it was a career highlight.

“I’ve had an illustrious career as far as awards go, but this is a capstone event I think,” said Rollins. “Being made professor emeritus is a crown jewel.”

Other awards bestowed upon Rollins over the course of his career include the Hero of Conservation, Field and Stream Magazine; Educator of the Year, Texas Chapter of the Wildlife Society; Sam Beasom Conservation Leader Award, Texas Wildlife Association; World Champion Quail Caller by Quail Unlimited; and Outstanding Contribution to Range Management honor, presented by the Texas Section, Society for Range Management.

Rollins was also recognized by the Texas Chapter of The Wildlife Society as an honorary life member in February.

“It is hard to imagine someone who has had a more profound, and enduring, impact on the landscape of quail than Dr. Dale Rollins,” said Carter Smith, Texas Parks and Wildlife Department executive director. “His laser-like focus and indefatigable passion and persistence on behalf of our native, wild quail have been a godsend to the wildlife, hunting and ranching communities.”

“On paper, my role was to take new information coming out of College Station and disburse it across the hinterlands of West Texas,” said Rollins of his AgriLife career. “Many times, I also found I was learning from ‘Rancher A’ who had a good spin on wildlife management, then sharing it with other landowners. So, in a sense I was a Johnny Appleseed for wildlife management on the back 40. I’ll always be indebted to those landowners who continued my education.”

Given that his name has now become synonymous with his beloved bird throughout the state, and that many would argue there is no single person who has done more to advance wild quail conservation in Texas, it is no surprise that Rollins has inspired so many others.

“Dr. Rollins has been an inspiration and a mentor to me and countless other wildlife professionals,” said Amanda Gobeli, AgriLife Extension Natural Resources Institute project coordinator, Dallas. “His research and outreach efforts have shaped the conversation about quail conservation in Texas for decades, and his unique teaching style fosters both an understanding of habitat management and the human connection which sustains it. His positive influence on both youth and adult education will reverberate in conservation circles for many years to come.”

Teaching others about quail

Rollins founded the Bobwhite Brigade, now called the Texas Brigades, in 1993. The camps for youth ages 13-17 brings together top wildlife and natural resources experts to offer instruction in a variety of fields. Each camp is focused on a game animal and teaches participants responsibility, leadership and sound wildlife management.

“Dr. Dale Rollins changed the course of my life and ignited my passion for conservation education,” said Helen Holdsworth, director of conservation legacy at Texas Brigades and Texas Wildlife Association. “I met him when I was working for Extension in 1992. He asked me to be a covey leader at the Bobwhite Brigade. I had no idea what I was in for, and I imagine there are many who will say the same thing about Dr. Rollins. I have never met anyone who has devoted their life to one thing, as he has devoted his life to quail. It is admirable and inspiring, and I owe him a debt of gratitude.”

Gobeli said Rollins has a way of talking and teaching that really resonates with people. “They don’t just listen to what he has to say; they really ‘hear’ him, and take it to heart,” she said. “The motto that he chose for the Texas Brigades, ‘Tell me, and I forget; show me, and I remember; involve me, and I understand,’ is one he lives every day. The number of people he has inspired—myself among them—is truly remarkable.”

Dr. Jim Cathey said he holds Rollins in high esteem for many reasons, but especially for his enthusiasm for teaching others about nature and life.

“The best lessons are the ones conveyed in stories, and Dale, a master of this craft, has a way of catalyzing the imagination of others by taking them on a journey of discovery,” he said. “His lessons could be about the biology and habitat needs of quail and other wildlife, but there is more to it as he tells, shows and involves youth and adult audiences in the delivery of information.

Cathey said he appreciates that Rollins is a motivator and never stops looking for ways to teach others, even when Rollins was battling a health crisis last year.

“Even as Guillain-Barre syndrome proved a tough opponent for Dale, he flipped the tables and used his own teachings to lift the spirits of others in rehabilitation by introducing cadences adapted from his own Texas Brigades to patients, staff and doctors,” Cathey said.

“It was no surprise to me to learn that he had these people involved in the healing process, and by that, I mean, marching, sounding off and breaking on down challenges to overcome. His lessons are deeper than the topic under his charge. If one listens, they are about life in its most personal sense, and for this I am eternally grateful for having crossed paths with Dr. Dale Rollins.”

Rollins said while with AgriLife, it was an honor to have worked with the various administrative department heads, project leaders and higher administration.

“I always appreciated leadership and guidance that made me a better professional over the years,” he said. “I enjoyed working with so many county agents and got to network with so many wonderful people while I was with AgriLife. I have so many wonderful memories with Extension and being awarded professor emeritus means so very much to me.”

Rollins continues to serve as the executive director of the Rolling Plains Quail Research Foundation and enjoys spending as much time outdoors with his bird dogs as possible. In other words, he still isn’t slowing down anytime soon.

“I work full time on what can be done to build the professional capacity and scope of what we do on-site at the Rolling Plains Quail Research Ranch and off-site,” he said. “I’m one of the fortunate few who can say their vocation and their avocation are one and the same.” 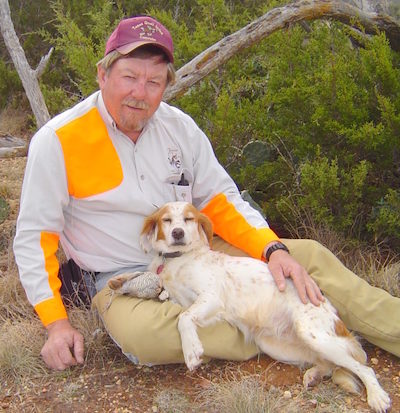 Dale Rollins with Lil’ Annie, one of his many beloved bird dogs. (Photo courtesy D. Rollins)