Climate scientists with the Intergovernmental Panel on Climate Change (IPCC) estimate that greenhouse gas-induced climate change will produce a global temperature rise between 2.5°F and 10°F in the next century (NASA, 2018). They predict this change will have serious implications for some wildlife and their ecosystems. Researchers have identified a variety of changes that both plants and animals may undergo in response to climate change such as shifts in distribution, earlier breeding times, and reduced breeding performance (Crick, 2004). Many species will likely shift their distributions northward to cooler latitudes in order to compensate for rising global temperatures (Gates, 1993).

Warmer temperatures may also encourage a “spring advancement” trend among wildlife, meaning they would initiate seasonal breeding activities earlier in the year. Signs of spring advancement include behaviors like earlier flowering, mating, or nesting. One study conducted on 677 species of plants and animals found that 62% were already exhibiting signs of spring advancement (Parmesan & Yohe, 2003). Many bird species are especially susceptible to this phenomenon because their life cycles are highly influenced by temperature and rainfall patterns, which makes them excellent bio-indicators for the current state of the ecosystems in which they live. It is estimated that the egg-laying date for 75% of bird species in the year 2080 will occur earlier on average than they do today (Crick & Sparks, 1999). Earlier nesting and egg-laying dates are just a couple of many examples that indicate how climate change can alter the life history of animals.

What do these projected changes mean for Texas quails, specifically? According to some climate models, Montezuma quail (Cyrtonyx montezumae), the least abundant quail in Texas, will potentially see an overall decrease of about 35-41% of suitable environmental conditions and areas in which they can live by 2070 (Salas et al. 2017). Montezuma quail in the United States are primarily found in the mountains of New Mexico, and hotter temperatures could initially provide the opportunity to expand into higher latitudes as these regions warm in the next few decades. The warming effect is a double-edged sword, however: the parts of Texas currently occupied by Montezuma quail—primarily in the Edwards Plateau and Trans Pecos ecoregions—may become less suitable to them. There will likely be a significant reduction of Montezuma quail numbers in the state, if not complete eradication, due to more extreme temperatures and other influences such as precipitation changes. Despite this, it has been projected that around 57% of their distribution will remain stable in the next fifty years due to their significant presence throughout Mexico (Salas et al. 2017). 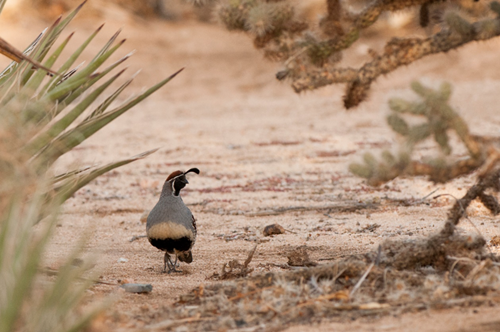 Studies of another Texas resident—the Gambel’s quail (Callipepla gambelii)—indicate they may experience a 75% increase in their suitable range from 2001-2075 (Sohl, 2014). Their natural tolerance for higher temperatures may help them adapt to increasing average temperatures more efficiently than other species. However, Gambel’s, as well as scaled quail (Callipepla squamata), are not able to survive temperatures above 45°C (113°F) and could also suffer from water loss if increasing temperatures create a shortage of succulent plants, which are a primary source of water for these species (Henderson, 1971).

Scaled quail are also likely to be stressed by the effects of climate change, either directly or indirectly, and both scaled quail and northern bobwhite (Colinus virginanus) populations have declined concurrently with increasing global temperatures. Although there are many factors which contribute to their shrinking numbers, global warming can exacerbate the problems they already face, such as habitat loss and fragmentation. Scaled quail and northern bobwhite abundance in semiarid regions is largely dependent on annual rainfall, an association that makes their populations particularly vulnerable to changing precipitation patterns (Bridges et al. 2001). Adequate rainfall is needed to provide food, moisture, and vegetative cover, meaning habitat quality may suffer in the wake of drier conditions and increasing frequency and intensity of droughts (NCAR, 2010).

One management strategy that can help counteract these effects is the creation of “microhabitats” with vegetative cover to protect quail from the heat and keep the ground cooler than ambient temperatures. Leafy canopies provide shade and higher evapotranspiration rates that work to cool the thermal environment at quail-level (Guthery et al. 2000). Altered rainfall patterns may make it increasingly difficult to sustain moisture-rich vegetation, but runoff can be redirected to create lush areas, and in some cases supplemental water can work in a similar way to make the environment hospitable for quail. 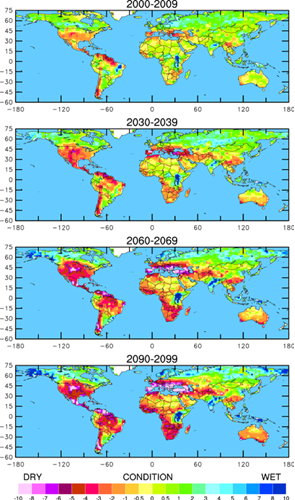 Northern bobwhites in Texas and other parts of their southern range will likely face the most severe complications in a future with rising temperatures. Studies have shown that prolonged high heat loads can cause early or staggered hatching times, reduce the length of the laying season, and prevent re-nesting attempts (Guthery et al. 2001). A 50% reduction in hatching rates was found when a 5°C (9°F) increase in pre-incubation temperatures was tested on eggs to imitate future scenarios of climate change (Reyna & Burggren, 2017). Bobwhite eggs can resist moderate oscillations or increases in ambient temperatures, but those in southern latitudes may find it difficult to cope if temperatures continue to climb. Higher temperatures can also inhibit bobwhite reproduction in other ways (Leopold, 1933). The stimulatory effects of rainfall on bobwhite reproduction can be significantly reduced by both increasing global temperature trends and higher-than-average temperatures in a single year for a locality (Robinson and Baker, 1955; Heffelfinger et al. 1999). Additionally, extreme summer temperatures often result in a smaller juvenile-to-adult ratio by decreasing chick survival rates and shortening the egg-laying season. If temperatures continue to rise above annual means, it could have serious implications for northern bobwhite reproduction and the long-term viability of populations (Lusk et al. 2001, Tri et al. 2012). 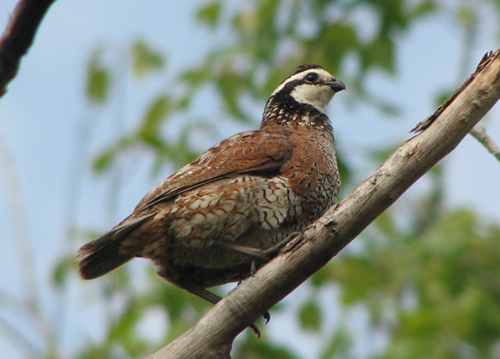 Current climate models from the USDA Northern Research Station predict that the center of northern bobwhite distribution will begin to shift north over time as these areas warm to their preferred temperatures, while southern latitudes become increasingly intolerable (USDA, n.d.). Bobwhites may even see a slight increase in habitable area between the years 2000-2100 as northern latitudes become warm enough to support their life cycles, but southern habitats will become increasingly uninhabitable (Salas et al. 2017). This follows the trend of many other species whose ranges will expand into northern latitudes, but there is no guarantee that bobwhites will be capable of moving northward to compensate for less favorable southern habitats. Barriers such as habitat fragmentation and the limited dispersal abilities of the birds themselves may prevent bobwhite quail from shifting their home range if necessary (Gates, 1993; Corlett & Westcott, 2013).

Although there are many potential impacts of climate change such as rising ocean levels, an increase in extreme weather events and wildfires, and changes in precipitation patterns (NASA, 2018), these all have varying levels of influence on the life of a quail in Texas. It is impossible to know exactly how all of these elements will affect the future of quail, or to what degree the birds will be able to cope. Other hurdles that prevent distribution shifts, such as habitat fragmentation, reduction in necessary vegetative food and cover, and reduced reproductive success, are all factors that may make it difficult for bobwhite and other Texas quail to thrive in a world affected by climate change. Only time will tell if Texas quail are able to adapt quickly enough to survive in a changing world.