Raccoons (Procyon lotor) are pervasive throughout most of the United States, and these “masked bandits” are well-known predators of quail and their eggs. Populations of raccoons and other mesopredators have steadily grown over the last 30 years due to several factors, including an increase in both fragmented habitats, a decline in the fur market, and supplemental feeding for deer and other wildlife (Rollins, 2014). If you are a landowner attempting to manage your property to benefit quail populations, there are steps you can take to determine if raccoons are predominant predators on your land. 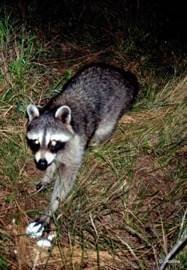 A raccoon caught in the act of nest depredation. Photo by Dr. Dale Rollins.

Researchers attempt to determine the perpetrator of nest depredation events based on either eggshell evidence or camera footage. One west Texas study that utilized remotely-triggered cameras for nest surveillance found that raccoons were responsible for 91% of depredations in simulated quail nests (Hernandez et al. 1997). Similar studies along the border of Florida and Georgia found raccoons to be the most significant mammalian predators of quail nests, making up between 5-29% of depredations over a two year period. Most of these nest raids occurred at night and involved a raccoon removing eggs from the nest with its front paws or mouth, then remaining at the nest while eating its meal (Staller et al. 2005).

Eggshell evidence alone may not always be a reliable method of identifying nest depredation by raccoons. One study in west Texas reported that raccoons left eggshells behind after raiding nests, while researchers in Florida captured video evidence of a raccoon eating quail eggs whole and leaving no evidence (Hernandez et al.1997; Tall Timbers Research Station & Land Conservancy 2018). It is commonly stated that raccoons will tear eggshells into large fragments and discard them near the nest bowl, but this behavior may vary depending on the size of the eggs in question (Hernandez et al. 1997). Hernandez et al. found eggshell evidence 91% of the time when chicken eggs were used, but only 3% of the time when quail eggs were used. The only indisputable evidence of a nest predator’s identity is camera footage, which can be used in conjunction with simulated (“dummy”) nests to maximize the chances of catching an egg bandit in the act. 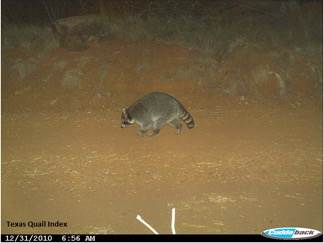 A raccoon photographed by a trail camera. Photo by Texas Quail Index.

Although raccoons may pose a significant threat to quail eggs, they are often unsuccessful at preying on adult quail. Another video from the Tall Timbers Research Station & Land Conservancy shows a raccoon attempting to grab a quail incubating its nest. The quail is able to flush and escape the raccoon, but this leaves its eggs vulnerable. A nest full of eggs, stationary and defenseless, is a far easier meal for a raccoon than a highly mobile adult bird. Because of this, raccoons more commonly depredate quail eggs than prey on quail themselves, making them more of a problem predator during spring and summer nesting seasons.

The use of trail cameras and/or dummy nests can help landowners determine if raccoons are causing trouble for quail on their property, but what rights do landowners have to limit raccoon nest depredation? According to the Texas Parks & Wildlife Department, raccoons become classified as “nuisance fur-bearing animals” when they are depredating or threatening human health or safety (TPWD, 2018). Landowners are legally allowed to take these “nuisance” animals by any means on their own personal land with no hunting or trapping license and no limit on numbers. However, according to TPWD it is illegal to:

It is important to note that the efficacy of predator control to benefit prey species has mixed reviews in the scientific community, and there are other ways to mitigate the effects of raccoons on your land which may be more effective. One method might be to reduce your predator control efforts altogether; scientists suggest that coyotes, through direct predation on mesopredator species, can alleviate predation on quail by species like raccoons (Henke and Bryant, 1999). In theory, if coyotes kill raccoons, there will be fewer raccoons threatening quail nests. Predation management is always complex, but coyotes can alter how raccoons use the habitat and help keep them confined to heavier brush (which is less likely to serve as quail nesting habitat) (Cooper et al. 2015).

Another way to protect quail eggs from raccoons is to cultivate better nesting habitat. The more hidden a nesting site is, the less likely it is to be discovered by predators. Lastly, if you are providing supplemental feed for quail, be aware that multiple non-target species might be utilizing your feeders. You can continue putting your game cameras to good use by setting them up near feeders to determine how much of your feed is actually being consumed by quail and how much is feeding raccoons, wild pigs, or other undesired species. Feeder sites can serve as productive sites to trap raccoons (Henson et al. 2012).  If you find that a large portion of your feed is being eaten by quail adversaries, you may need to alter or eliminate your supplemental feeding practices altogether to prevent quail predators from congregating in those areas. Small management changes can have a big impact when it comes to reducing predation on quail, and it is often best left up to well-informed landowners to decide what practices will most effectively reduce raccoon nest depredation on their individual properties.

For further rules and regulations on the capture, take, and sale of fur-bearing animals, view an informational TPWD publication here.

For information on how to cultivate better nesting habitat for quail, take a look at the videos on our YouTube playlist.