Gambel’s quail (Callipepla gambelli) are less common in Texas than northern bobwhites (Colinus virginianus) and scaled quail (Callipepla squamata), but they are compelling creatures with unique adaptations that allow them to survive the harsh desert conditions in which they live. These ground-dwelling birds were discovered in the 1840s by William Gambel, a young American naturalist who loved birds and minerals (Ashworth 2017). Gambel discovered several other species to which his name is now attributed, including the dainty Mountain Chickadee (Poecile gambeli) and Gambel’s oak (Quercus gambelii). Although William Gambel discovered many interesting species, researchers continue to focus on Gambel’s quail and are perpetually learning more about these charismatic birds.

Gambel’s quail have clear differences in appearance from the three other species of quail that are found in Texas - northern bobwhite, scaled quail, and Montezuma quail (Cyrtonyx montezumae). They are most easily identified by the black, teardrop-shaped plume (“topknot”) displayed on their foreheads. Although both male and female Gambel’s quail have these distinct plumes, they are sexually dimorphic, meaning that the sexes differ in appearance. The males have flashier coloration which includes black faces and foreheads, a black patch on their undersides, and an unmistakable rusty crown bordered in white (Texas A&M AgriLife Extension), while females have more uniformly gray/brown faces.

In addition to their distinctive coloration, Gambel’s are also generally stockier birds than other Texas quail. A Gambel’s quail at maturity can weigh anywhere between 160-200 grams (0.35 - 0.44 pounds) with a wingspan of approximately 14 inches, while bobwhites, with a comparable wingspan, average 140-170 grams (0.31 - 0.37 pounds) (Thomson 2001; Chumchal 2000; Texas A&M AgriLife Extension). Although Gambel’s quail are more impressive in size than other species, they still exhibit the typical quail behavior of avoiding flight until it is absolutely necessary; they much prefer to run from danger and hide in plant cover (Thomson 2001). However, Gambel’s quail do not usually travel long distances and spend their lives in a home range of between 25-393 acres, depending on the habitat quality of the land (Luna et al. 2017).

Gambel’s quail are also unique when it comes to vocalizations, as their calls are distinct from the “poor-bob-white” whistle of bobwhites and the “Pe-cos” calls of scaled quail. The most noteworthy vocalization Gambel’s quail make is a loud, three note “ka-KAA-ka” which is used to locate other quail or assemble a group. Other sounds can include the alarming “chip-chip-chip” or the “kow” and “whit whit” sounds of a male courting a female (Texas A&M AgriLife Extension). Along with these calls, males sometimes exhibit a behavior called “tidbitting” when courting females. A male will extend small bits of food to a female while fanning his tail in the air and holding his head close to the ground to entice the female into mating. Once they have mated, Gambel’s quail are generally socially monogamous and will stay in one pair for their entire lifespan of about 1.5 - 2 years. In Arizona and New Mexico, there have been a few instances of Gambel’s quail mating with scaled quail and creating a hybrid offspring called a “scramble” (Luna et al. 2017). 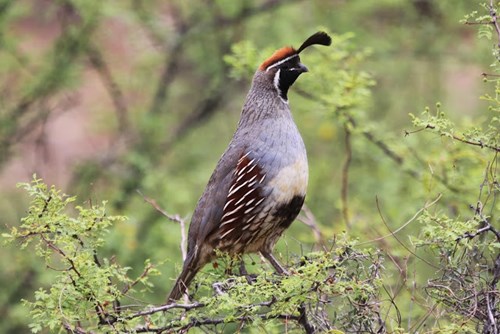 The far west Trans-Pecos ecoregion of Texas where Gambel’s quail are found makes up a small portion of their range that stretches primarily into New Mexico and Arizona. In the 1950’s and 1960’s, the Hawaii Division of Fish and Game introduced a few Gambel’s quail to all the main Hawaiian islands, but today only insignificant amounts remain on the Big Island of Hawaii, Lanai, and miniscule Kaho’olawe (The Cornell Lab of Ornithology). Gambel’s quail are well acquainted with the extremely dry habitats of the Sonoran, Chihuahuan, and Mojave deserts, but they generally choose to live near riparian areas (habitats close to sources of water like a river or stream). The vegetation that grows in these areas is critical for nesting, roosting, and shade from the hot desert sun. Gambel’s quail, like most other quail, get the majority of their drinking water requirements from the food they eat and rarely need to drink surface water.

Because Gambel’s quail live in such extreme desert environments, food is generally limited and they must have diverse diets to survive. They often feed near the ground for insects like ants and beetles, tender plant shoots, and seeds. In years with less precipitation, they will rely more on fruit and berries from shrubs and cacti to make up for the lack of herbaceous plants. In Arizona, mesquite trees can act as an important source of food for Gambel’s quail (Luna et al. 2017). They eat the seeds, leaves, and flowers throughout the year and will sometimes eat mesquite seeds from cattle and coyote droppings (The Cornell Lab of Ornithology). During the hotter months, Gambel’s quail adopt a bimodal activity pattern to keep from overheating (Goldstein et al. 1985). This means they eat in the early morning and late evening and rest throughout the hottest parts of the day. During these daytime resting periods, it is critical that quail have access to plant cover to shield them from the sun’s rays. Ideal cover plants can include tarbush (Flourensia cernua), little leaf sumac (Rhus microphylla), catclaw acacia (Acacia greggii), and honey mesquite (Prosopis glandulosa).

Gambel’s quail generally nest on the ground in bowl-shaped indentations, but will sometimes lay their smooth, brown-spotted eggs in trees or shrubs with suitable platforms. The chicks of Gambel’s quail are known to hatch in synchrony. After an incubation period of 21-31 days, the mother will call to her chicks who then communicate with one another through their egg shells and hatch at the same time. Generally, these chicks will neatly break a circle in the egg shell with their beaks and then open it like a door (The Cornell Lab of Ornithology). 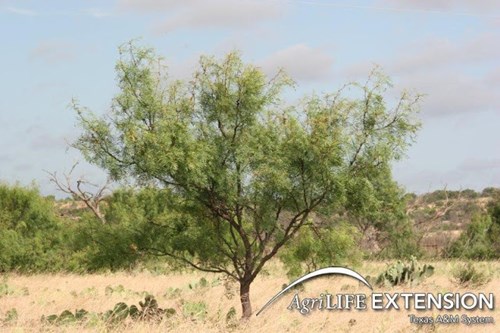 Honey mesquite (Prosopis glandulosa) is a woody plant that Gambel’s quail will utilize for cover, roosting, and food provision.

Although their numbers are relatively small in Texas, the management and research needs of Gambel’s quail should still be considered. Most of the research for this species takes place in the states where their populations are highest. Texas generally gets its information about Gambel’s quail population trends from informal data counts like Christmas Bird Count and harvest data, but it is becoming increasingly important to get more reliable population data from sources like brood-count and call-count surveys. Studies conducted by Texas Parks & Wildlife Department have led researchers to believe that Gambel’s quail populations in Texas, unlike bobwhites and scaled quail, have remained steady and may even be increasing (Luna et al. 2017). If their numbers in Texas continue to grow, it will become crucial for us to learn more about their ecology and life history, as well as the management practices that will help them thrive.