The Origin of the Wild Pig Species

The Origin of the Wild Pig Species

Nearly 160 years ago Charles Darwin published his “On the Origin of Species,” a work that would become the cornerstone of evolutionary biology. The book's 502 pages outlined the scientific theory of natural selection and species diversity through evolution across successive generations.

In contrast, this article may at best become the cornerstone of someone’s leisure reading for about 5 minutes and 2 seconds. However, if you’ve ever wondered where wild pigs (Sus scrofa) came from, why there are so many different names for them and how man has influenced nearly everything about them, well then what follows may be worth your minutes.

In order to understand how wild pigs became what they are today, look no further than the history of the domestic dog (Canis familiaris). Science generally accepts that sometime between 10,000 - 33,000 years ago humans in Asia domesticated the wolf (Canis lupus). In whatever time frame it actually occurred, people transformed wolves into Labradors, Poodles and even Chihuahuas through selective breeding and trait selection over successive generations (Figure 1). 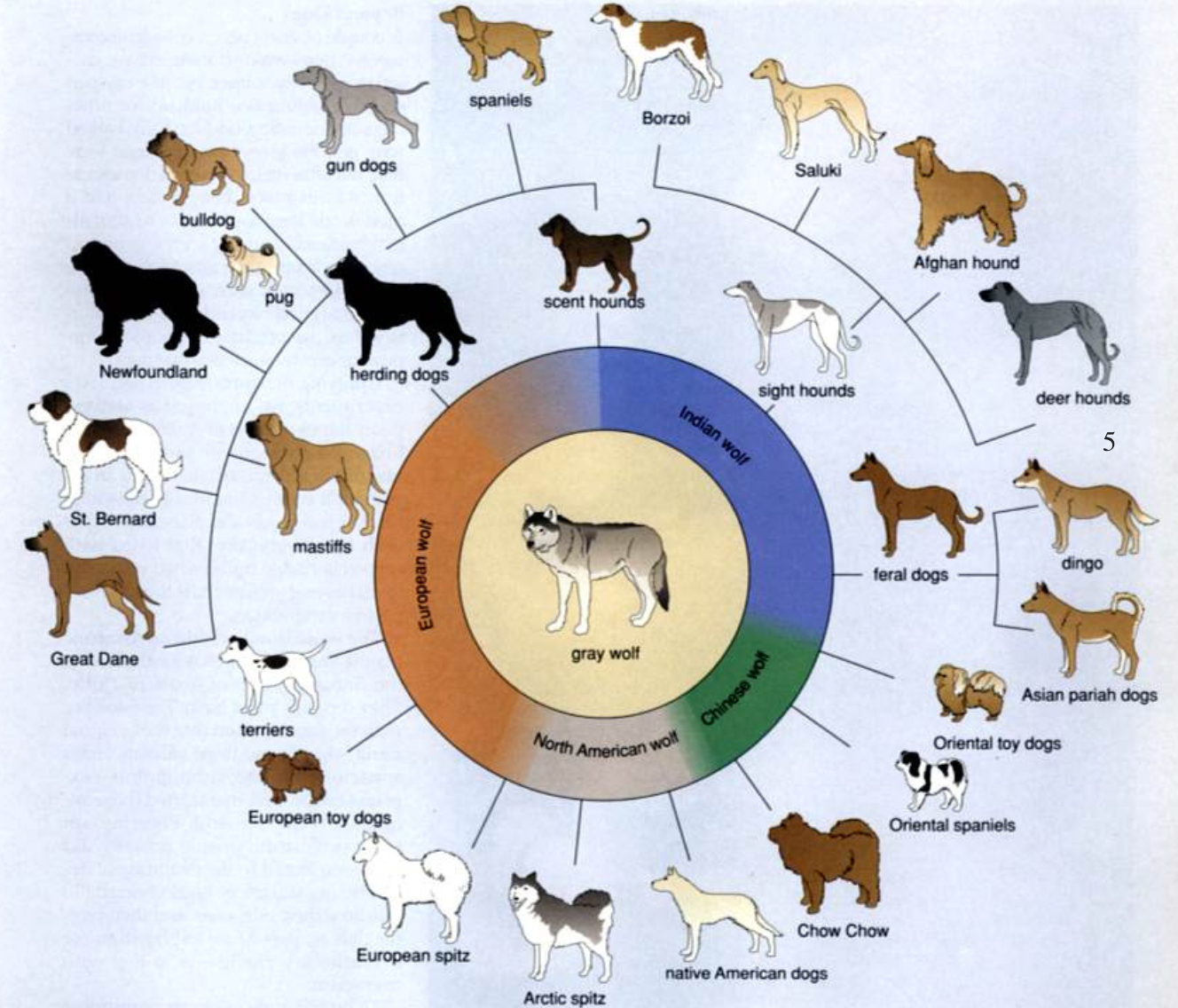 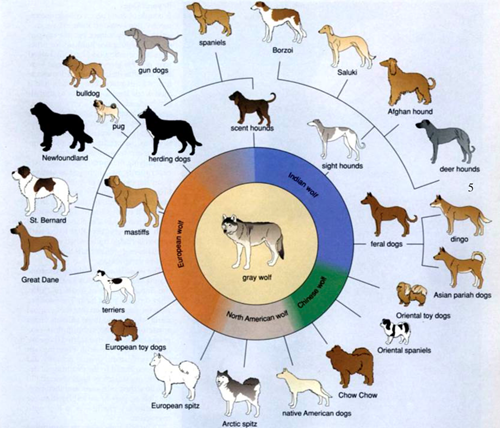 Such transformation within dog breeds continues to occur in modern times, take for example the Labradoodle or Boerboel. While this example is admittedly a little extreme and extends somewhat beyond what occurred in wild pigs, it is a good portrayal of how desirable traits can be selected for over time. However, just as Chihuahuas were derived from the wolf, domestic pigs were derived from the Eurasian boar (Figure 2). 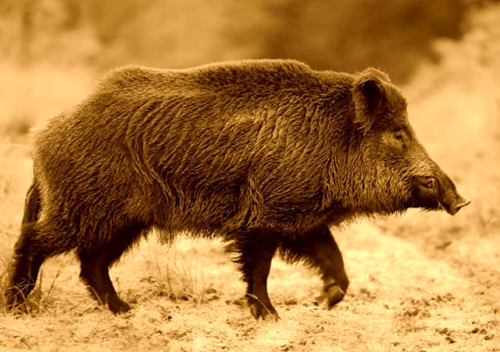 Figure 2. The domestication of the Eurasian or "Russian" boar resulted in hundreds of breeds of domestic pigs.

A vast zooarcheological record indicates that the Eurasian or “Russian” boar was first domesticated approximately 9,000 years ago in what is now Eastern Turkey. More recent phylogeographical evidence suggests that the domestication of this species occurred at multiple times and in multiple locations across Asia, Southeast Asia, India, Europe and Africa. Domestication simply offered a much safer and more efficient alternative to chasing wild boar around the woods with a spear. Thus began the radical transformation of the Eurasian boar into the domestic farm pig (Sus scrofa domesticus) (Figure 3). Nowhere would such change become more evident than in Europe, and it would be Europeans who would ultimately deliver the domestic farm pig to the New World. 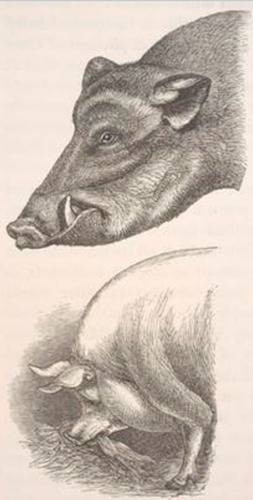 Figure 3. Charles Darwin’s depiction of a Eurasian boar (top) and a Yorkshire Large Breed (bottom) in his “The Variation of Animal and Plants and Under Domestication” is a good example of the dramatic transformation that occurred during the domestication process. (Image credit: Charles Darwin)

For the purposes of this article, there is no need to delve into the complexities of genetic heritable traits, domestic reversion, Darwin’s “domestication syndrome,” or exactly everything that had to happen for a 400 lb. Eurasian boar to turn into a pink, flop eared Landrace. Truth be told I don’t think I could do so intelligibly anyhow. But this did occur, obviously, and today there are literally hundreds of breeds of domestic pigs of all sizes and colors. The more important aspect, with regards to today’s wild pigs, is how this process may have aided their intelligence, reproductive capacity and potential overall survivorship. The reason for this is that wild pigs today are the direct beneficiaries of many of the adaptations and advantages incurred through the domestication process (Figure 4). 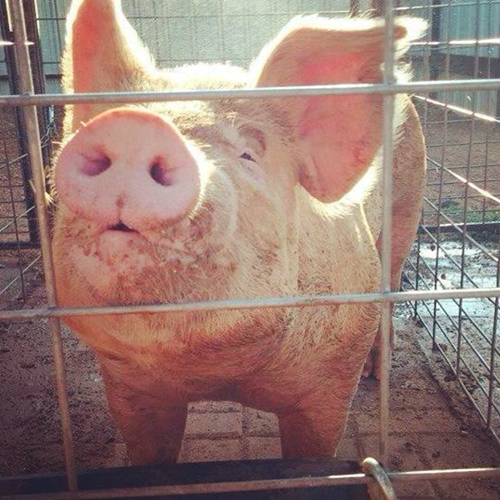 If I am a producer a few of the traits that I would like my farm pigs to exhibit are efficient animal gain, intelligence, and most importantly the production of as many offspring as possible as quickly as possible. It is no coincidence that the aforementioned were historically among the most selected for traits in all breeds of domestic pigs. These and a variety of other characteristics would ultimately transfer directly into wild populations. For example, wild pig sows today can begin breeding as early as 6 months of age, produce 2 litters every 12-15 months, and have increasingly larger litter sizes with age (4-6 per litter initially, up to 10-13 per litter later in life). It doesn’t help that they are also among the most adaptable and intelligent animals on the planet.

Why Not All Wild Pigs Are Feral Hogs

Now equipped with the desirable farm animal traits listed above, domestic pigs were initially brought to North America in 1539 by Hernando de Soto, a Spanish explorer and conquistador, as a reliable food source for early European settlers. These animals were allowed to range freely, and eventually established the initial populations of “feral hogs.” In the early 1930’s Eurasian boar were released onto hunting preserves in Texas, where some eventually escaped and interbred with true “feral hogs”—those originating strictly of domestic stock. Today, there are potentially 3 types of wild pigs that occur in Texas and North America. There are domestic pigs that have gone feral (feral hogs), hybrids between Eurasian boar and feral hogs, and Eurasian boar (Figure 5). However, few if any true Eurasian boar still free range in Texas or North America due to the rapid dilution of their bloodlines through the near constant breeding practices of wild pigs. All 3 types can collectively be referred to as wild pigs, whereas only domestic pigs that have gone feral can accurately be referred to as feral hogs. 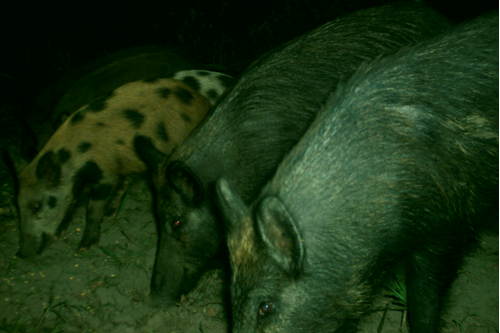 Figure 5. Interbreeding among the many breeds of domestic pigs that have gone wild (feral hogs) and Eurasian boar resulted in the dramatic variations now found in wild pigs today.

The wild pigs on the landscape today are well equipped to enact a tremendous scale of agricultural, water quality, native species and habitat damage. By selecting for traits such as high animal gain, extreme fecundity, intelligence and others through the domestication of the Eurasian boar, man produced an efficient and productive farm animal.

However, by transporting and releasing both domestic pigs and Eurasian boar on new landscapes, these animals hybridized and subsequently created a prolific and destructive, exotic invasive species. The Eurasian boar was already an enduring and adaptable species even before humans domesticated, transported and hybridized it. However, it is important to acknowledge the contributions of man to the many issues we face today concerning wild pigs.