In the story, the big bad wolf easily blew the straw and stick houses over with little effort, but he was no match for the brick dwelling. Although the big bad wolf was the antagonist of this nursery rhyme, we as farmers, ranchers and wildlife enthusiasts must find a way to become smarter than the big bad wolf and knock down that metaphorical brick house. 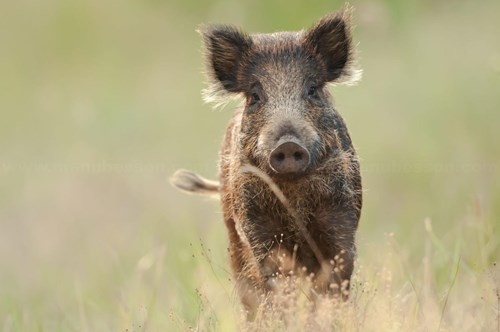 Feral hogs were brought over on ships by Spanish explorers as a traveling food sources. (Adobe stock photo.)

Brought over on ships by Spanish explorers as traveling food sources, feral hogs have slowly built up their numbers over the years. Feral hog populations have reportedly been established in 35 states, but sighted in 48. Joshua Gaskamp, wildlife and range consultant and technical consultation manager at the Noble Research Institute, Ardmore, Oklahoma, said there are roughly 7 million feral swine in the United States right now. However, accurately calculating the number is complicated.

“It’s a little difficult to understand exactly what’s happening with the feral hog situation because there are some unknowns,” said Jim Cathey, associate director for the Texas A&M Natural Resources Institute. “Counting any animals in the wild is difficult. Feral hogs don’t have the eyeshine like deer do, they’re black and they’re active at night, so it’s just difficult to get a direct count.”

Additionally, for states like Texas, there is no state agency in charge of counting wild pigs. Cathey said they are not considered a game animal in Texas, but rather exotic livestock so they do not really fall under any particular umbrella.

“It really is a no man’s land situation,” Cathey said. “The organization that is often in charge of the movement of wild pigs is the Texas Animal Health Commission, although they do not have the equipment to count hogs.”

Cathey said he was involved with a 2012 modeling of biological factors and growth estimates for wild pigs in Texas and in that study, it was believed Texas had between 1.8 and 3.4 million feral hogs with an average of about 2.6 million at that time.

“The thing is, those numbers are going to be elevated for today as the populations have grown,” Cathey said. “It’s safe to say there are millions of wild pigs in the state of Texas.”

“That’s pretty staggering to think about this invasive, non-native species causing that much in agricultural damages,” Cathey said.

According to Russell Stevens, strategic consultation manager and wildlife and range consultant at the Noble Research Institute, Texas estimates each hog causes $200 worth of damage per year. The numbers are all over the place because we have no idea approximately how many pigs are rooting around our country, the bottom line is the feral pig plague causes major damage that has serious consequences.

“The largest impacts from feral hogs in agriculture are apparent in crop losses and disease threat,” Gaskamp said. “Crop losses occur in many ways, including direct loss of planted seed or vegetation, economic burdens to re-plant lost crops, equipment damage caused by rooted ground, and opportunity costs from producers choosing not to plant because of failure risk due to feral hogs.”

Livestock owners also strive to eradicate wild pigs because they carry a number of diseases that can be transmitted to livestock.

“Disease in feral hog populations can threaten other livestock production as feral hogs have been known to transmit brucellosis, pseudorabies, and many other diseases to cattle and domestic swine, causing abortions and death,” Gaskamp said. “Feral hogs are a reservoir for at least 60 animal diseases including some foreign animal diseases like foot-and-mouth or African swine fever. Identification of a FAD in feral hogs in the U.S. would depress domestic livestock markets and halt exports to other countries resulting in a huge economic burden for the country.”

“Feral hogs can’t cool themselves, so they do that by their behavior,” Cathey said. “They wallow in stream systems and around stock ponds and whatever water systems they can get into to cool their body. They also defecate in those areas and that deposits E. coli bacteria in some of those streams, making it extremely difficult to improve water quality.”

This wallowing is detrimental to terrestrial wildlife, aquatic wildlife and livestock. Furthermore, Cathey said feral swine are omnivores, so they eat both plant and animal material and have an incredible impact on wildlife resources.

“They’ll consume just about anything, but they’ll prey on anything from small frogs to white tail deer fawns,” he explained.

Stevens said feral hogs also compete with native wildlife, and since feral hogs are not native to North America, our ecosystems have not evolved to their presence.

“Their rooting is detrimental from many aspects; it encourages invasive plants to come in, causes erosion and destroys native plant communities,” Stevens said. “They just really are the bane of farmers, ranchers and wildlife conservationists.”

How did it get this bad?

According to Cathey, feral hogs did not start becoming a major issue in Texas until the 80s when they were transported by a number of people and started populations in a number of areas. Although the problem is particularly bad in Texas and Oklahoma, Stevens pointed out that some states, like Kansas, have avoided the wild hog epidemic.

“They have kind of tackled that up front, and they have not allowed sport hog hunting,” Stevens said. “Because as soon as that happens, hogs start to spread everywhere and they don’t have wings.”

Another aspect which is unique to Texas, and that has contributed to feral hog numbers, is that it is legal to market feral hogs as meat animals in the state.

“It’s complicated, because it’s not just hunting, it’s also legal to capture wild pigs in Texas and sell them through an approved holding facility—governed by the Texas Animal Health Commission—and that food goes through a couple animal processing plants here in the state and it winds up on markets, so there’s also a meat packing aspect,” Cathey said. “Catching and selling wild pigs is not the same as going and hunting them.”

Cathey said other states use this as an example of what not to do.

“They don’t want there to be any incentive to keep wild pigs around and I understand that,” he added.

Additionally, wild pigs are viewed differently among the states. Cathey said in California, hogs are a regulated game animal, so there is not consistency across the states, but he said there is certainly a growing agreement that wild pigs are much more problematic than beneficial.

“Five years ago, feral hog populations were more tolerated because of the additive recreational opportunity they provided and/or economic incentive that could be derived from selling live feral hogs to specialized slaughter or hog-fenced game ranches,” Gaskamp said. “Today, these opportunities are waning because they are more widely available in the states and people are realizing the deleterious affect feral hogs have on other wildlife and the ecosystem.”

What are we doing to curb the hog numbers?

So what is the answer to this formidable problem? Feral hogs are now estimated to be in the multi-millions, making them one of the most abundant large invasive animal species to be found in the U.S., according to U.S. Department of Agriculture. They are also considered to be one of the greatest wildlife damage management challenges in the U.S. and worldwide.

Cathey, Stevens and Gaskamp, all agree trapping is the best method that exists right now to curb feral hog numbers. However, landowners must follow specific trapping guidelines to make a dent in this brick house. Although setting a trap seems simple on the surface, feral hogs are quite intelligent, so following expert strategies is key.

“Trapping feral hogs take a recipe of pre-baiting a site for several days to acclimate hogs to a food source, setting up a trap that will facilitate capture of the entire group, allowing hogs to acclimate to the trap, and delaying trap triggering until the maximum number of hogs can be captured,” Gaskamp said. “When a trapper cuts corners here, they often capture the first hogs to enter the trap—the most naïve ones—and leave the most wary ones on the landscape to contribute to future populations.”

Although some good-intentioned landowners use small, animal activated traps, Stevens says these really are not effective, and in some cases teach hogs how to avoid being caught.

“When you don’t have all the pigs in the pen and the gate drops, the pigs that are on the outside learn really quickly not to go in,” Stevens said. “I think we educate more pigs to traps by using smaller, trip wire traps.”

Instead, Stevens and Gaskamp both suggest the cellular BoarBuster trap, developed at the Noble Research Institute, which drops on top of the wild pigs. Gaskamp said it has a removal rate of 88%—a higher rate than any other researched trap on the market.

“Elevating the trap speeds up the trapping process because hogs don’t associate the overhead structure with danger,” Gaskamp said. “When wire panels are removed from ground level, hogs can enter and exit the trap in any direction and acclimate much quicker.”

However in the current effort to reduce feral hog numbers one of the biggest flaws is not working together.

“It doesn’t do any good at all on my 1,000-acre property to trap hogs as much as I can, if none of my neighbors are doing a darn thing,” Stevens said. “It’s probably going to take regional efforts among landowners to be able to make a big dent in these critters.”

Fortunately, lawmakers have taken steps to provide funds to aid in the mission of removing this invasive species. The newest farm bill included a pilot program called The Feral Swine Control Pilot, which authorized $75 million toward hog control in the country. Gaskamp said half of that money went into existing control by Wildlife Services, and the other half went to the Natural Resources Conservation Service, which solicited proposals for control and monitoring programs in several pilot states including: Alabama, Arkansas, Florida, Georgia, Louisiana, Mississippi, Oklahoma, North Carolina, South Carolina, and Texas. He believes this is a huge step for identifying the great ideas that will help reverse the feral hog problem, however we obviously have a long road ahead.

“It took us decades to get to this point and it will take longer to get out of it,” Gaskamp said. “The best thing landowners can be doing to curb the problem is follow expert guidance when implementing control techniques and work with their neighbors.”

By working together, utilizing experts and grant money, there is real potential to huff and puff and blow the feral hog house down.