The Texas A&M Natural Resources Institute, or NRI, has recently published the Texas Quail Atlas, a free online resource and the newest "story map" to be developed by the institute.

The online atlas was developed as a collaborative effort of the Reversing the Decline of Quail in Texas Initiative and the NRI Geospatial Analysis Team.

"This interactive resource tells the story of the four species of Texas quail using maps and historical data to examine how and why quail populations in Texas have changed over time," said Jim Cathey, Ph.D., associate director of the institute. "It will help provide answers for landowners, quail enthusiasts, hunters and other observers as to what has happened to quail populations throughout the state in recent decades."

"Many Texans consider these birds to be iconic state species and fondly recall hunting them, watching them or just listening to their songs," Cathey said.

He said the new atlas provides a wealth of information for anyone looking to learn more about the history of Texas quail and why the conservation of these species is so critical. It is the second in a series of quail story maps, after Habitat Requirements of Texas Quail.

"Recent research efforts, such as those funded by the Reversing the Decline of Quail in Texas Initiative, have sought to determine what factors are contributing to the decline of quail in Texas," Cathey said. "Potential causes include drought, land-use changes, land fragmentation, habitat loss, human-wildlife interface issues, invasive species, insecticides, diseases and parasites." 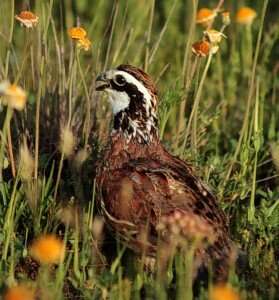 Quail is one of the many species of birds drawing hunters and nature tourists to Texas. Credit: Texas A&M AgriLife Extension Service photo

"What has happened to quail populations in Texas is intricately linked to the health of its lands and has a significant impact on the ecosystems, finances and culture of the state," she said. "But it can be difficult to recognize the long-term and regional patterns that impact quail populations unless the data is compiled in one place. We have attempted to give a more comprehensive picture of the quail decline through time and under changing conditions."

Gobeli said with the interactive maps in the atlas, the user can zoom in to see either data for their own county or a more general statewide view. Slider bars alternate between historical and present-day data to show changes over time.

"It also includes a timeline of pivotal historical events that contributed to the current state of quail and ecosystem case studies that illustrate the importance of habitat," she said.

Kevin Skow, Texas A&M AgriLife Research geospatial system coordinator with the NRI in College Station, said one of the challenges of developing the atlas was to find a user-friendly way to convey the volume of information.

"We pulled data from several unrelated sources from the national agricultural census, citizen-science sources, the Texas Comptroller's office, wildlife agencies and elsewhere," Skow said. "Story maps like these have a lot of information, so we found a template that would allow us to break the information into chapters. We looked at presenting the atlas as a book and then fleshed out the individual chapters. Together, those chapters tell the story of quail in Texas in an interactive way."

Skow said while some of the information in the atlas can be found elsewhere, the new online publication focuses foremost on the challenges identified in the quail decline initiative.

"Land-use changes, as well as changes in vegetation and urban development over the past decades, can be seen in the aerial images included in the atlas," he said. "Seeing visual evidence of important changes, such as the loss of working lands in the state, help show what factors quail populations have had to deal with over the past decades."

Gobeli noted the dynamic mapping features and snapshots portraying a studied history of quail heritage make the Texas Quail Atlas "a terrific resource for teaching landowners and the next generation of natural resource managers."