What is a Raptor?

Raptors, a.k.a. “birds of prey,” include eagles, hawks, falcons, owls and many other species. The term raptor is derived from the Latin word rapio, meaning to seize or take by force; this is quite apt as raptors will often swoop down and seize prey with their large talons. But which species are the main predators of quail? The primary avian predators of quail are small, agile raptors referred to as Accipiters (Accipiter spp.) [which include Cooper’s hawks (Accipiter cooperii) and  Sharp-shinned hawks (Accipiter striatus)] and northern harriers (a.k.a. marsh hawks; Circus cyaneus) among others (Rollins and Carrol 2001, Cox et al. 2004). Accipiters are considered some of the most efficient predators that quail face, with Cooper’s hawks being touted as “the outstanding natural enemy of the bobwhite” (Stoddard 1931). Other raptors known to take grown bobwhites include various broad–winged hawks, a.k.a. Buteos (Buteo spp). 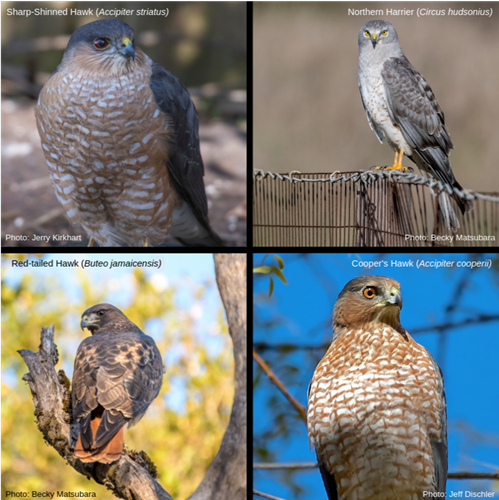 Such as Red-tailed Hawks) and large owl species, such as Great-horned Owls (Bubo virginianus) or Barred Owls (Strix varia) (Jackson 1947; Parmalee 1954). All raptors are protected by state and federal law and therefore it is illegal to kill, trap, harass or possess these species.

Having a hard time telling the Sharp-shinned Hawk apart from the Cooper’s Hawk? Check out this beginner’s guide to identifying these species from the Audubon Society.

How do Raptors Hunt Quail?

Studies have shown that the reaction of quail in response to avian predators is innate and instinctive (Melvin and Cloar 1969, Perkins et al. 2014, Reyna and Newman 2018). Their short, round stature, small wings and large feet often make running an easier get-away than taking flight, but without sufficient cover, quail are “sitting ducks” when it comes to raptors. Raptors mainly prey on adult quail, but there has also been evidence of raptors targeting quail nests as well. Terhune et al. (2008) documented three cases of three different raptors depredating bobwhite nests (Barred Owl, Cooper’s Hawk, and Great-Horned Owl) during incubation at their study sites in Georgia. 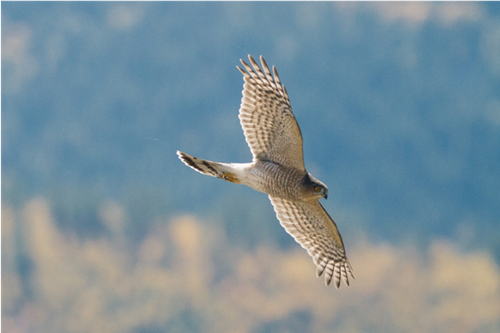 But what about the chicks? Quail chicks are precocial, meaning they are covered in down feathers when they are born and able to leave the nest shortly after hatching. Since they are so small and mobile, it is unlikely that raptors will expend the energy needed to hunt them (Terhune et al. 2008). Screening cover, consisting of mostly tall bunchgrasses, broad-leafed forbs, and shrubs, allows chicks to roam with concealment from predators, including raptors who may be hungry enough to make a meal out of them (Rollins and Carroll, 2001).

Effects Raptors Have on Quail Populations

Since the late 1960s, many raptors—including Cooper’s hawks—have actually increased in abundance (Sauer, Hines, and Fallon 2002, Hernandez and Peterson 2007, Sauer et al. 2017). More hawks eat more quail, right—so does this mean they’re having a negative impact on quail populations? Are they contributing to the steep decline we’ve seen recently? The answer is not so simple. 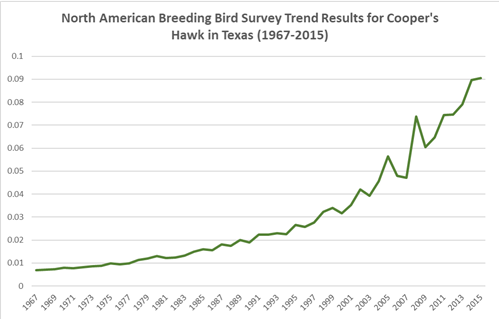 Survival rates of bobwhites varies widely across seasons and can be influenced by a variety of factors (Rollins and Carroll, 2001). Bobwhites are subject to naturally high levels of mortality; in any given year, only about 20%–30% of the population will survive (Hernandez and Guthery 2012). Hawks, particularly Cooper’s and northern harriers, certainly contribute to the death toll of bobwhites, but there are many other variables at work as well. It’s also important to remember that not all of the raptor population growth is happening in bobwhite habitat and that Accipiters don’t ONLY predate upon quail—they’ll also take songbirds, doves, or even small mammals and reptiles as prey. The cumulative impact of raptor predation on actual quail populations is evident only at local scales and unlikely to cause large changes in their overall population (Rollins and Carrol 2001).

Raptors also have direct impacts on pen-raised quail, as they will congregate in areas where quail have been released. Perkins et al. (2018) found that avian predators can easily distinguish between flushes of wild and pen-raised bobwhites and had a 100% success rate when pursuing pen-raised birds, versus only a 7.2% success rate with wild birds. In one study, the investigators found that hawks increased by 35%–109% during a 2-month period following pen-raised quail releases but only by 11%– 52% in a control site (Hernandez and Guthery 2012). Rather than adding their numbers to wild quail populations, pen-raised birds may just be feeding raptor populations instead.

How to Reduce Raptor Predation on Quail

One major issue with predator management for quail is that the predators that are easiest to control may not be the same as those eating the most quail. Hawks are a primary predator of quail throughout Texas, but all hawks and other birds of prey are protected by state and federal law, unlike other mammalian predators such as raccoons and coyotes. So how can you help quail to evade their deadliest predators?

Perkins et al. (2014) determined that when attempting to evade a raptor, quail flew farther, faster, and landed in areas with relatively taller vegetation. This same study also found that quail only utilized woody shrub cover during raptor trials and did not utilize it during hunter, mammalian, and researcher threat simulations. Almost one-third of the times a quail was pursued by a hawk it went underground (into a burrow) to escape the hawk. Improving habitat through careful management of woody plants can help you minimize raptor predation and provide both escape and mid-day coverts  for quail. Woody vegetation with dense branches, such as catclaw acacia (Acacia greggii), lotebush (Ziziphus obtusifolia) agarita (Mahonia trifoliolata), and littleleaf sumac (Rhus microphylla), hide quail from avian predators while providing shade and sometimes food as well (Perkins et al. 2014). If your property is lacking many of these species, half cutting mesquite trees is one way to increase suitable woody cover for quail.

Amanda Gobeli is a Project Coordinator at the Texas A&M Natural Resources Institute. She is currently working on a variety of projects, but she was instrumental to the Reversing the Quail Decline Initiative (RQDI), a cons…