Do Unmanned Aerial Vehicles Have a Place in Wild Pig Management?

Do Unmanned Aerial Vehicles Have a Place in Wild Pig Management?

Wild pigs (Sus scrofa) are a growing concern across the country, and, unfortunately, Texas seems to have the largest population over other states.  Landowners, producers and others concerned with minimizing damages associated with this exotic species often look to emerging technologies to reduce wild pig numbers.  Remotely activated trapping system manufacturers boast higher capture rates over traditional box and corral traps that rely on a mechanical trigger tripped by wild pigs.  Aerial gunning with a helicopter proved to be a viable population reduction tool (Campbell et al. 2010).  Even conventional hunting can be improved through the use of technologies such as night vision, thermal optics and firearm suppressors.  Now, unmanned aerial vehicles (UAVs) are gaining a place in the management toolbox to improve management of wild pigs.

From recreational flying by hobbyists to commercial uses like construction or even military applications, today’s UAVs are fast becoming a daily tool to complete tasks in a more efficient way.  For instance, the largest retailer in the world, while currently limited by aviation regulations, is already poised to deliver packages to your door with UAVs.  Researchers and agricultural producers have taken notice of UAV benefits, and have begun incorporating this technology into agricultural production.  In fact, 80-90% of the anticipated growth in the UAV market by 2025 is projected to come from the agricultural sector (Stehr 2015).  From sensing and mapping the methane emissions of cattle to detecting the ideal ripeness of fruits through their ethylene levels (Pobkrut et al. 2016), UAV use in agriculture is well underway and seemingly here to stay.

Unmanned aerial vehicles use will progress along with the need, technology and acceptance of this tool.  For instance, improvements to UAV flight controllers and other sensors are already translating to the actual pilot becoming less of a necessity and more of a safety precaution.  In the not too distant future, UAVs will be able to perform their duties autonomously.  Provided a number of regulatory hurdles involved with autonomous aircraft are resolved, this could mean a big win for agricultural production or crop protection. 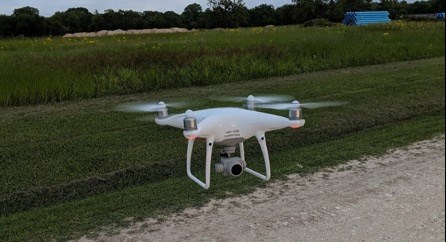 Fully autonomous aerial vehicles will be capable of both flying and charging without the need of human involvement.

Many UAVs can be equipped with infrared or thermal sensors as well as low light cameras which aid in the detection of the primarily nocturnal wild pig.  While research efforts have focused mainly on agricultural crop monitoring and damage assessment (Michez et al. 2016; Steinbrucken 2013), UAVs equipped with these kinds of systems are also being used gain a bird’s-eye view of wild pigs, their trails and loafing areas.  Additionally, UAV systems are being developed that have the ability to discern the difference between damage specifically caused by wild pigs and other sources of damage (Rutton et al. 2018).  For instance, UAV sensors can identify differences in damage signatures caused by flooding and other sources as opposed to wild pigs.  This kind of research could potentially lead to streamlined and efficient crop loss documentation for insurance claims in the future.  Other UAV research efforts involve direct wild pig monitoring and surveys for population estimates (Racanelli et al. 2018).  This research demonstrates an emerging role for UAV systems in wild pig management, with implications for more efficient control measures in the future. 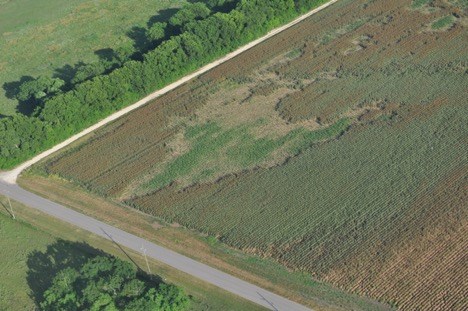 The Potential Role of UAVs in Wild Pig Control

Researchers, producers and agencies such as Texas Wildlife Services are already utilizing UAVs to gain a better understanding of crop destruction caused by wild pigs, especially on lands which may be difficult or time consuming to access.  However, UAVs are also being used to scout for wild pigs, identify areas they frequently inhabit and to determine their access points onto a property.  Federal Aviation Administration (FAA) laws and certification procedures in Texas are strict and for good reason, so direct control efforts from an UAV are extremely unlikely.  More realistic uses for the UAVs in wild pig control in the future will most likely be in a supporting role that increases the efficacy of legal control methods.  One example could be to utilize an autonomous thermal equipped UAV to locate sounders for trapping, hunting or aerial gunning with helicopters.  Another could be to efficiently determine potential snaring locations by flying a UAV around a property’s perimeter fence instead of spending all day driving to scout snare sites.  While the primary limitations of UAV today are mostly regulatory, numerous possible uses for UAVs in wild pig control exist that could come into play in the future.

Although it may seem intimidating, getting to know the ends and outs of UAVs has become easier.  Many people can pick up a controller and within a few hours become competent in flying simple recreational UAVs.  Those who live near large cities may readily find groups that offer flight lessons and companies that rent UAV equipment at reasonable rates.  There are many great options among UAV types, but it is a good idea to try different ones before purchasing a particular aircraft.  Flying with someone that already uses the UAVs is encouraged, and practicing will increase your comfort level in operating the aircraft.  Whether using UAVs commercially or non-commercially, a pilot should know and understand all applicable rules and regulations for UAV operation in their state before operating any aircraft.  Although UAVs are not the sole answer to wild pig or land management, they are emerging as another tool that should receive consideration.