The Most Mysterious Quail in Texas

The Most Mysterious Quail in Texas

Many people are familiar with the “poor-bob-white” call of the northern bobwhite (Colinus virginianus) and the cotton-top plumage of the scaled quail (Callipepla squamata) but one of the lesser known species in the state of Texas, the Montezuma quail (Cyrtonyx montezumae), also has many characteristics that make this striking creature exciting to learn about. They are the least abundant quail species in Texas and can only be found in two ecoregions: the Edwards Plateau and Trans-Pecos. Their distribution in Texas declined in the mid 20th century primarily due to major changes in land use resulting in deteriorating habitat conditions, but they are relatively abundant in Mexico and southern Arizona where the pine-oak woodlands habitat that Montezuma quail prefer can be found (Leopold, A. Starker and Robert A. McCabe 1957). Montezuma quail are also called Mearns’ quail, harlequin quail,  fool’s quail and codorniz pinta. 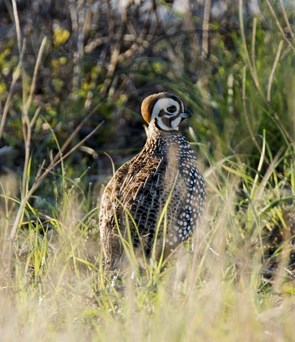 Like bobwhites, Montezuma quail are sexually dimorphic, meaning that the males and females have different appearances. Males have strong black and white “clown-like” patterns on their face and colorful body that earn these quail the harlequin nickname, while females have patterns in varying shades of brown. In comparison to other quails, Montezuma quail have larger, more powerful  feet that are used for digging up many of their main food sources like bulbs, insects, and seeds. Sedge tubers and rhizomes (Cyperus), wild onions (Allium), and underground wood sorrel bulbs (Oxalis) can make up a large part of their diet as can insects like ants, grasshoppers, and beetles. Montezuma quail often leave behind shallow depressions in the ground where they have been digging as well as uneaten plant hulls that are great indicators of quail activity throughout the day (Albers, Randy P. and Frederick R. Gehlbach 1990). Like most other quail, Montezuma quail do not need to drink surface water if their food contains a high enough water content. 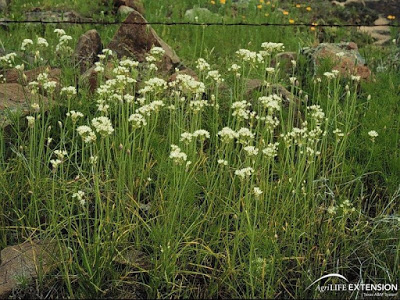 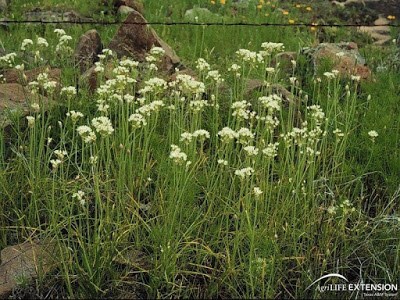 The diet of the Montezuma quail often includes plants such as wild onions.

Although they are not dependent on surface water for their diet, Montezuma quail populations depend heavily on timely rainfall that facilitates the success of their nesting season. Abundant rainfall allows for necessary cover and food plants to flourish (Greer 2002). If sufficient rainfall does not occur until later in the year, the Montezuma nesting season will begin later. Because Montezuma quail are so dependent on rain and the plant cover it provides, nesting dates will vary by geographic region. In Texas, their nesting season is typically earlier in the Edwards Plateau and later in the Trans-Pecos region. The nests of Montezuma quail closely resemble thoseof northern bobwhites because they also construct a grass dome roof to hide their eggs from predators. Their eggs are white and glossy and the average clutch size of a Montezuma quail nest is typically about 11 eggs. One particularly unique trait of the Montezuma quail is that they have a much stronger covey survival instinct while they are incubating their nests than most other quail species. That is, they are more inclined to help the whole group survive while they are nesting rather than having the individualistic mindset of saving themselves and protecting their own nests. This can be helpful for their survival in periods with decreased ground cover either from lack of rainfall, overgrazing, or extreme weather. Without sufficient plant cover, Montezuma quail become much more vulnerable to aerial predators such as Cooper’s hawks (Accipiter cooperii), northern goshawks (Accipiter gentilis), and northern harriers (Circus cyaneus). All of these birds of prey are protected under both federal and Texas state law. Typical ground predators of either Montezuma quail or their nests are exactly the same as predators of other Texas quail species: bobcats (Lynx rufus), skunks (Mephitis mephitis), raccoons (Procyon lotor), and snakes. Their primary defenses against predators are camouflage and hiding in plant cover, and if the plant cover is sufficient, they will not easily flush and can be difficult to find, making Montezuma quail one of the most secretive species (Brown 1979).

Due to small population numbers in Texas, there is no open hunting season for Montezuma quail. This means that they provide very small direct economic benefits to the state – so why are they important to us? The population health of this species can give researchers an insight to the ecosystem in which they live. This knowledge can be used to improve ecosystem health and increase the productivity of the land. The presence of Montezuma quail can also boost ecotourism from birdwatching because these beautiful, secretive birds are so rare in Texas. Although most of the general natural history characteristics of these quail were recorded from observation, contemporary methods, such as radio telemetry, are being used in current research efforts. There is still much to learn about the fascinating Montezuma quail (Brennan 2007).

Good water distribution is needed for many animals and although quail get much of their water from food, they will use surface water when available. For more discussion on this topic, read our article: Supplemental Water for Quail.

Abigail joined the Texas A&M Natural Resources Institute in April 2017 as a student assistant. She currently works as an Extension Associate on a variety of projects, but she was instrumental in creating resources for the…