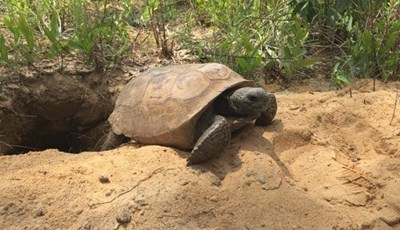 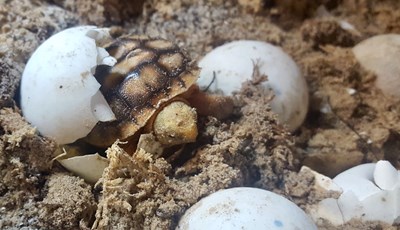 The combined conservation efforts of NRI and numerous private landowners and stakeholders saved more than 1,000 at-risk gopher tortoises from an uncertain future, while also encouraging population growth in new, long-term environments. This collaboration is only the beginning for other wildlife affected by gopher tortoise populations and can serve as a model for many at-risk species affected by human co-existence issues. Thanks to additional granted funding, NRI researchers aim to continue their work to provide this species a life well-lived.

As director for the Texas A&M Natural Resources Institute, Dr. Roel Lopez provides leadership in the field of wildlife ecology and natural resource management. Roel works with internal and external stakeholders in develop…

To keep both animals and humans protected from Chagas disease, Texas A&M University System entities have been studying the parasite-host-vector interaction at sites in South Central Texas.

NRI as a unit of Texas A&M AgriLife, has been doing a lot of work researching three unique snakes; the Louisiana pinesnake, the eastern indigo and the massasauga rattlesnake.

The Defense Department announced the winners of the 2021 Secretary of Defense Environmental Awards recognizing installations, teams and individuals for their accomplishments in innovative and cost-effective environmental management strategies that support mission readiness.

The U.S. Department of Agriculture’s (USDA) Natural Resources Conservation Service (NRCS) today released its new 5-year plan to conserve the Southeast’s threatened gopher tortoise by focusing on the conservation and restoration of its key habitat―longleaf pine forests, and fire will play a leading role in the efforts.