Thanks to a unique partnership with Florida’s Eglin Air Force Base, biologists with the Texas A&M Natural Resources Institute have found that, perhaps unsurprisingly, the fable of the tortoise and the hare also applies to tortoise conservation and recovery. 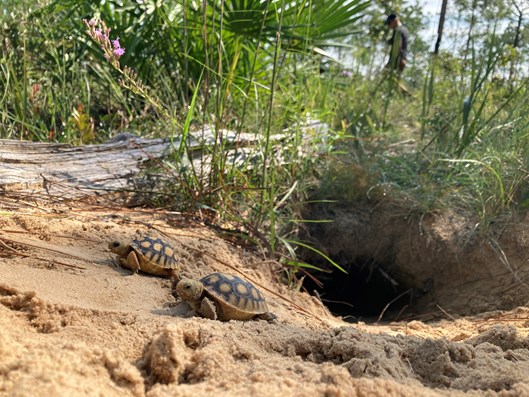 The foundation of this collaboration is the Natural Resources Institute’s Military Land Sustainability Program, which supports the U.S. military’s mission through integrated land management and collaborative regional planning.

In 2016, the Natural Resources Institute entered into a cooperative agreement with Eglin Air Force Base and the Florida Fish and Wildlife Conservation Commission to benefit gopher tortoise populations on the military installation through translocation of threatened tortoise communities across Florida.

After more than five years of research, team building, strategizing and fieldwork, recent milestones have shown that slow, steady progress can truly win the proverbial race.

One of only five tortoise species native to North America, the gopher tortoise, aptly named for its creation of extensive underground burrows, inhabits the U.S. coastal plains from southeastern Louisiana to Florida and into the southern portion of South Carolina.

Like many native wildlife species, over the past century gopher tortoises experienced drastic declines in population due in large part to habitat loss and land fragmentation driven by human development.

“Everything with tortoises is slow,” said Wade Ryberg, Ph.D., research scientist with the Natural Resources Institute, a unit of Texas A&M AgriLife Research. “The populations dwindled over time, and they also don’t recover rapidly.”

A unique opportunity for multi-species conservation

When biologists on Florida’s Eglin Air Force Base found that gopher tortoise populations within the installation were shrinking, leadership decided to implement proactive measures to ensure they met directives administered by the U.S. Fish and Wildlife Service and Florida Fish and Wildlife Conservation Commission protecting federal and state threatened species, Ryberg said.

Because Department of Defense lands like Eglin Air Force Base maintain restricted access and are protected from extensive development and habitat loss, department lands across the U.S. support the highest density of federally threatened and endangered species of any other federal land management agency.

Under the Endangered Species Act, the department is required to protect any federally listed species found on their land. This includes limiting disturbance and impacts within critical habitat areas and during important times of the year, such as breeding season.

“The purpose of this and other projects is to support military mission flexibility through recovering listed or potentially listed species found on installations,” said Vivian Porter, Natural Resources Institute project coordinator based in Florida.

Currently, the gopher tortoise is federally threatened in the western portion of its range including Mississippi and Louisiana. In 2007, the Florida Fish and Wildlife Commission designated the tortoise as a state-threatened species and established the Gopher Tortoise Management Plan to aid in its recovery.

However, outside the boundaries of the Air Force base, the survival of an estimated 25,000 gopher tortoises remains in limbo due to a permitting system established prior to their threatened listing.

Before 2007, Florida land developers could apply for what are known as Incidental Take Permits. These permits, administered by the U.S. Fish and Wildlife Service, may be granted to non-federal entities when their otherwise lawful activities might result in the harming of endangered or threatened animal species. Following a survey to estimate the number of tortoises on the property slated for development, construction over gopher tortoise burrows could proceed in exchange for a calculated fine.

Although no new Incidental Take Permits are allotted, those issued prior to 2007 may still be used.

“If a developer or landowner applied for and received a permit under the old regulations but never developed the land, that permit remains valid,” Ryberg said. “In some cases, they may have sold the property, and the permit transfers to the new owner.”

Growing public awareness that these burrows were being paved over, resulting in the prolonged death of the entombed tortoises, led to much public outcry and subsequent efforts on the part of developers to mitigate potentially negative public relations.

After extensive planning and consultation with Eglin Air Force Base biologists and leadership, the Natural Resources Institute and partners began translocating at-risk gopher tortoises to suitable habitat located throughout the 464,000-acre installation in 2017.

Jeremy Preston, endangered species biologist at Eglin Air Force Base, said top leadership recognized the merits of this program thanks to previous efforts supporting recovery of the federally endangered red-cockaded woodpecker within the installation.

“Eglin is a unique place with a lot of really amazing reptiles and amphibians,” Porter said. “We’ve seen large benefits for gopher frogs and have been able to strategically place tortoise burrow sites near gopher frog breeding wetlands. It has been incredible how fast these frogs find the burrows.”

Porter said by reducing the distance between the tortoise burrows the frogs inhabit and the wetlands they utilize for breeding, biologists are hoping to reduce the frog’s chances of mortality.

Celebrating milestones and planning for the future

Since 2017, more than 6,000 gopher tortoises were successfully translocated to Eglin Air Force Base. In September 2022, biologists discovered the first photographic evidence of successful reproduction among translocated individuals.

Ryberg said based on past discoveries of empty hatchling nests located outside of gopher tortoise burrows, the project team was certain of successful reproduction. But now, they have definitive proof.

“In the last year, we’ve gotten good at identifying the nests, which are located within the apron area close to the burrow entrance,” Ryberg said. “Now we can place cameras there to monitor, collect data and tell the full story of this project.”

One month after this discovery, the U.S. Fish and Wildlife Service ruled that the Distinct Population Segment found in the eastern portion of the gopher tortoise’s range no longer met the criteria for Endangered Species Act listing and was withdrawn as a candidate. Populations within the western population segment remain protected.

“I have no doubt that the work being done on Eglin Air Force Base, as well as other collaborative conservation projects across public and private lands within the gopher tortoise range assisted the U.S. Fish and Wildlife Service in making their decision to not list the eastern population,” said Roel Lopez, Ph.D., director of the Natural Resources Institute. “This is truly an example of conservation success through building partnerships.”

Currently, there are 10 minimum viable gopher tortoise populations spread across Eglin, each comprised of 250 tortoises. Leadership at Eglin has set a minimum goal of 18 populations.

“Eglin’s approach to addressing any endangered or threatened species issue is to go above and beyond when there is a clear path to secure regulatory predictability,” Ryberg said. “This story is the confluence of so many other stories that started decades ago. In reality, this is a multi-species program where the success of one species leads to successes of another.”