by David Stone, Our Town Temple 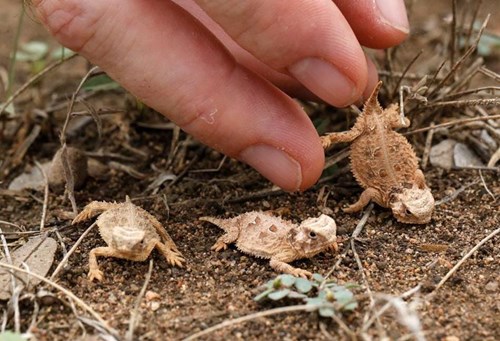 “There are a lot of factors that go into horned lizard breeding — you can’t just throw them in a pile and expect them to mate. You have to look at genetic relatedness to prevent inbreeding, and they have to be around the same size. And sometimes, the females are picky and just don’t like the male. If that happens, she just won’t cooperate.”
Diane Barber, Fort Worth Zoo

Sharon Walden Harrison, also of Temple, used to “catch the babies by the dozen.” She wonders if that’s one of the reasons they are so scarce today. Breathe easy, Sharon, you are not the culprit.

“Horned lizards eat those big red harvester ants, and ranchers and homeowners trying to kill fire ants nearly wiped out the harvester ants with insecticides. That left a declining number of hungry horned lizards,” he said.

“Horned lizards were susceptible to efforts to rid Texas of fire ants,” he said. “We took away their food source.”

Fighting for a Future

“Zoos around the state have established breeding programs and are stocking the Mason Mountain Wildlife Management Area (near Mason),” he said. “A female horned lizard can have 20 to 40 babies per cycle, but there are a lot of predators out there — hawks, roadrunners and other birds; small mammals such as skunks and ring-tailed cats; and snakes.”

For about 15 years, the Texas Horned Lizard Coalition — including TCU, the Texas Parks & Wildlife Department and zoos in Fort Worth, Dallas, San Antonio and elsewhere, — has been studying how to restore Texas horned lizards to formerly occupied habitats. Reintroduction efforts are ongoing at Mason Mountain, where extensive habitat management and restoration have provided vital “new homes” for the lizard.

According to Nathan Rains, a wildlife diversity biologist with Texas Parks & Wildlife, there are two species of horned lizards in the state.

Dr. Dean Williams, an expert on Horned Frog conservation and a professor at TCU, has done extensive research and learned that the lizards in East, Central and West Texas are basically the same, but horned lizards in South Texas are a bit different, Rains said.

Because of these differences, Fort Worth, Dallas and Tyler zoos are breeding horned lizard babies to release at Mason Mountain, and the San Antonio Zoo is breeding the South Texas species to release on private ranches.

According to Rains, TP&W started seeing horned lizard populations as threatened in 1967. He agrees that fire ants and a reduced number of red harvester ants was a major reason for the decline. But, he said, there was a combination of reasons why the beloved spiked lizard began to disappear in many parts of Texas.

“One of the big reasons for the decline was a change in habitat,” he said. “Urban areas have expanded — we’ve seen a lot of development in the past 60 years. We’ve lost native prairies to housing, but also to agriculture. A lot of these prairies are now hay and corn fields — we have taken away the habitat.”

“We know the numbers have declined in many parts of the state because we don’t see them,” Rains said. “We know they are absent, but getting numbers is impossible. They are hard to find, and they are camouflaged. Horned lizards are very good at not being observed by people.”

“We have released more than 1,000 baby horned lizards at Mason Mountain,” he said. “We started out releasing adults, but you can’t reasonably catch enough adult horned lizards to restart a population elsewhere.”

As Hibbitts stated, female horned lizards can have up to 40 babies at a time, and that helps even the odds on the environmental playing field.

“They have a high reproduction capacity to make up for babies that will become prey,” Rains said. “About 89 percent of the babies end up as dinner for predators. Everything in the wild eats horned lizards, and that’s kind of surprising. They are somewhat flat, covered with spikes and even shoot blood from their eyes as a defensive mechanism.” 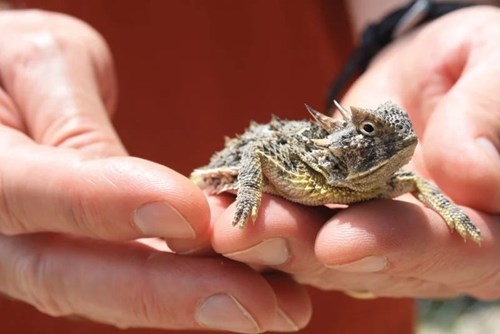 Breeding is a Challenge

“It’s a challenge to mass produce horned lizards, even in captivity,” Rains said. “For some reason, drought affects captive lizards as well as lizards in the wild.”
The cost of mass breeding lizards is also quite high, he said.

“The adults have to be fed ants, and ants are expensive,” he said. “One company provides ants for all the research facilities, zoos and schools wanting to have ant farms. The ants cost about 3-cents each, and the average adult horned lizard eats more than 100 ants per day.”

The Fort Worth Zoo began its horned lizard breeding program in 2001, but breeding for the purpose of reintroduction didn’t occur until a decade later.
“We started with a single pair of horned lizards, and we were the first institution to breed the animals in captivity,” said Diane Barber, curator of ectotherms at Fort Worth Zoo and the leader of its horned lizard conservation program. “The zoo had started a Texas Wild exhibit and our original breeding efforts were for that purpose. We started our conservation efforts in 2011.”

Today, the Fort Worth Zoo has about 100 adult horned lizards, and roughly half are female.

There are a lot of factors that go into horned lizard breeding,” Barber said. “You can’t just throw them in a pile and expect them to mate. You have to look at genetic relatedness to prevent inbreeding, and they have to be around the same size. And sometimes, the females are picky and just don’t like the male. If that happens, she just won’t cooperate.”

While the female can produce as many as 40 eggs per clutch, that doesn’t mean all will hatch.

“It varies greatly,” Barber said. “Sometimes almost all hatch, other times the eggs may not become fertile. A lot has to go right to get a bunch of babies.”
In the past six years, the Fort Worth Zoo and its partners — TCU and TP&W — have released an average of about 200 babies per year at Mason Mountain. Barber hopes that number grows.

Once baby horned lizards arrive at Mason Mountain, they are not just turned loose to survive.

“Transmitters are attached to each baby,” Barber said. “When they are tiny — a newborn horned lizard is about the size of a TicTac — we use very small harmonic radar devices to track each one. This is a radar that was originally developed to track skiers trapped during avalanches. The device is placed in ski jackets and can help locate a lost or buried skier.”

“We use something very similar to track baby horned lizards,” she said. “The harmonic radar devices are superglued to the lizards. The device falls off after the lizard sheds but we have time to track its general area. We also put ink spots on their bellies and we can track them that way. If we find a released lizard that has become an adult, we attach a transmitter to the animal so we can track it over a greater distance.”

Barber said TCU students join the reintroduction efforts by working at the zoo’s breeding center and at Mason Mountain.

“They monitor released lizards to help determine how many are surviving.”
Experts say horned lizards will never reach numbers or be as widespread as they were in the early 1960s, but they do hope populations take hold in multiple locations across the state.

“So much habitat is gone,” Rains said. “Fire ants are somewhat under control — they have filled in the parts of Texas where they can survive. We are looking for ways to further control these ants without disrupting other animals. We do hope to re-establish horned lizard numbers on public sites where people can enjoy them, and at source locations where populations can grow.”