The Texas A&M Natural Resources Institute (NRI), in partnership with the Texas Military Preparedness Commission (TMPC) in the Office of the Governor, and with a grant from the Department of Defense Office of Local Defense Community Cooperation (formerly the Office of Economic Adjustment), developed several reports and web tools that assist installation personnel and community stakeholders in addressing various aspects of encroachment issues facing Texas installations. Our work began in 2019 with the development of the Texas Early Notification Tool (tent.nri.tamu.edu), facilitating early engagement between energy developers, community stakeholders and the military to avoid development conflicts that may impede aviation assets.

“The 15 major military installations in Texas are not only critical for the defense of our nation, they add $123.6 billion to the state’s economy and support more than 660,000 direct and indirect jobs in communities across the state,” said Keith Graf, TMPC Executive Director. “Consistent with our goals to preserve, protect, expand, and attract new military missions, assets, and installations, these reports and web tools provide stakeholders with needed insight to proactively address encroachment issues facing Texas installations.”

The latest iteration of the project expanded to cover several other compatibility concerns often faced by installations including incompatible land use and activities around military assets and federally listed species protection and management.

The state and the military have a long history of working together to build a stronger Texas and a more secure nation. Despite the many shared goals and positive interactions among the state, local communities and military installations, certain actions (or inaction) by one entity can sometimes directly or indirectly impact the others and create conflict. As communities develop and expand in response to population growth, economic investment, and market demands, land use decisions can push incompatible land use development closer to military installations and operating areas. The resulting land use conflicts, often referred to as encroachment, can have negative effects on the sustainment of military activities and overall readiness, as well as on the quality of life, safety, and economic development of the state and local communities. Addressing the overlap among the various local and regional land use compatibility studies from military communities across the state, a new report, Military Land Use Compatibility in Texas: 2021, focuses on identifying potential statewide actions, such as legislation, that would reduce or eliminate the land use conflicts many installations similarly encounter.

To help visualize future land use change that may have present and future adverse implications on military test and training spaces, the newly developed desktop web application Texas Airspace Planning and Forecasting Tool (TAPFT) and companion report provides Texas military operation planners and training space managers with an interactive way to query and map specific aviation assets of interest and examine projected land use change across the state. Planners will more specifically be able to anticipate change on the landscape that could impact their missions and objectives allowing them an opportunity to target areas for early community engagement, avoiding potential development issues. TAPFT comes ready with a comprehensive user guide featuring the various tools, features and export capabilities with an option to view the demonstration video located within the tool. 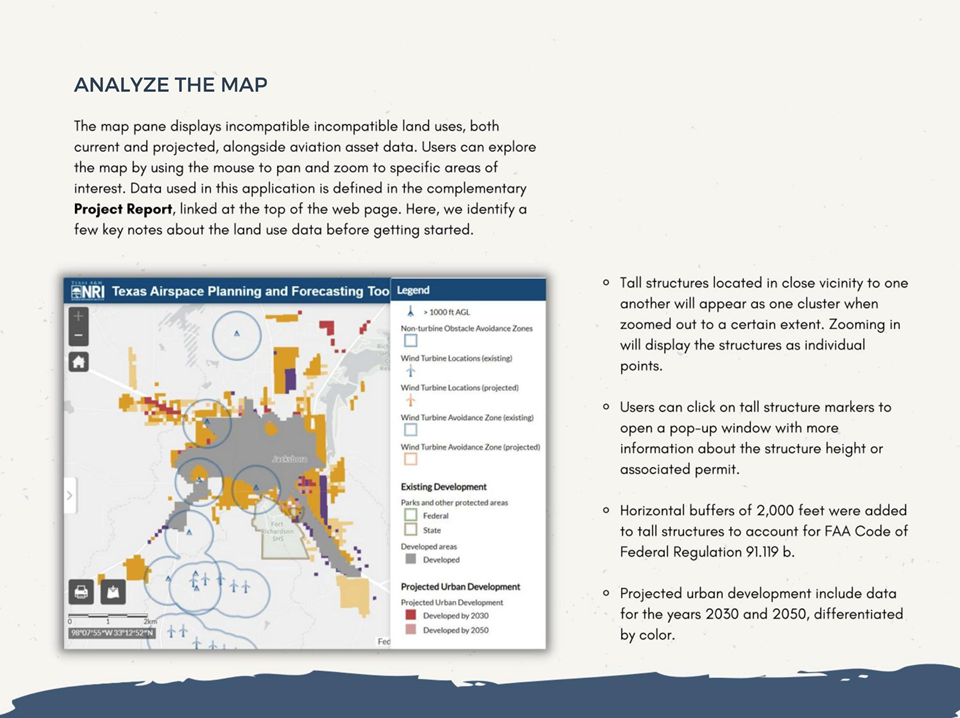 Inside the TAPFT User Guide

While land compatibility remains one of the most complex natural resource challenges for military installations, another equally critical aspect of land use is wildlife. The federal government owns 640 million acres of land in the U.S., including 25 million acres of biologically diverse landscapes that fall under the jurisdiction and management of the Department of Defense (DoD). The importance of these DoD lands to sustainable wildlife populations and their unique habitats is well established, especially for species of conservation concern. A 2014 assessment report concluded that 458 federally listed threatened and endangered species and 555 at-risk species occur across military defense sites, and more than 40 of these species are found exclusively on DoD land. A multitude of federal, state, and local laws and regulations provide the legal framework for conservation and management of the natural resources on federal lands.

To assist installation natural resource managers in planning efforts related to monitoring and management of threatened and endangered species on installations, NRI developed the Threatened and Endangered Species Forecast Guidebook. This guidebook identifies species most likely to be listed as threatened or endangered under the U.S. Endangered Species Act in the near future, and that may occur on military installations in Texas. Through use of species summaries, managers gain the necessary background to begin proactive planning efforts that are critical in light of funding constraints.

As a project coordinator for the Texas A&M Natural Resources Institute, Drew Finn assists in the organization and management of endangered bird research and monitoring at Joint Base San Antonio-Camp Bullis, Texas. She als…