Wild pigs (Sus scrofa) are considered opportunistic omnivores – meaning they will consume both plant and animal food sources available to them throughout the year. The vast majority of a wild pigs diet consists of plant materials (Figure 1), and an important, seasonal food source for wild pigs are mast crops (acorns, fruits or beans). Common mast producing species in Texas include oaks, hickories, honey mesquite, prickly pear cactus and persimmon. This article will highlight the research that has been conducted on wild pig competition with native wildlife for mast, the effects mast has on wild pig population trends and how wild pigs’ consumption of mast can influence forest composition. 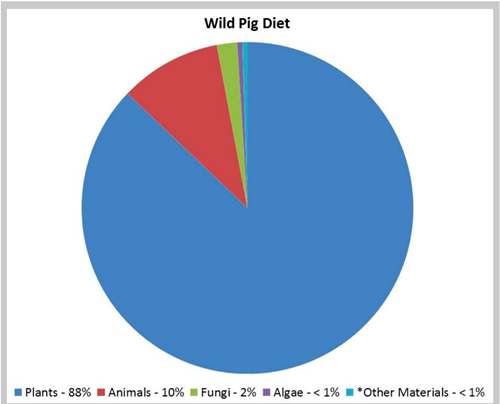 Consumption of Mast and Competition with Wildlife

Mast crops represent a high-quality food source for wildlife and are consumed by many native Texas species including white-tailed deer, wild turkeys, collared peccaries and multiple small mammal species, including squirrels and rodents. Honey mesquite pods contain high concentrations of carbohydrates, some protein and several minerals, including sodium, calcium, iron, and zinc (9). Acorns of both white and red-oak species (Figure 2) are high in fat and carbohydrates and contain some vitamins and minerals, including calcium and phosphorus (8, 15). Acorns of the red-oak group have a high concentration of phenolics and tannins 15, which are compounds that can reduce palatability to wildlife.

Due to the variable environments and unpredictable levels of rainfall in Texas, mast crop production can vary widely between individual plants, species and years. For example, acorns from trees in the red-oak group are considered semi-annual producers since they take approximately 15 months (two growing seasons) to mature, whereas acorns in the white-oak group are considered annual producers since they only take approximately 3 months to mature (one growing season) (12). These crops are often available in large quantities for limited periods of time, mainly in the fall and winter months. Because mast crops often are distributed unevenly across the landscape, there is potential for competition among various species of wildlife for these resources (5). 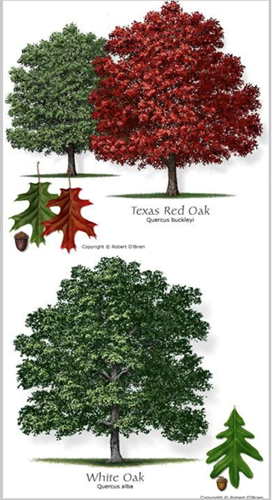 To test this hypothesis, researchers at the Caesar Kleberg Wildlife Research Institute conducted an experiment to compare levels of mast intake between multiple native wildlife species (white-tailed deer, wild turkeys, collared peccaries, raccoons) and wild pigs by offering these various mast crops and measuring the rate of intake and total amount consumed by each species. Results of the study found that wild pigs can consume mast at an equal or higher rate than native species when consuming mesquite pods and live oak acorns, and had the capability of eating the relatively larger, astringent, red oak acorns that were rejected by raccoons and wild turkeys. The rates of intake and the ability of wild pigs to displace native wildlife species from feeding sites 2 suggest that wild pigs can compete effectively with wildlife for mast crops (5).

As stated above, wild pigs are opportunistic omnivores and are able to readily shift their diet between browse, mast and animal food sources throughout the year. Many native wildlife species, on the other hand, are very specialized in their diets and are unable to shift to new food sources when their usual ones run out. During productive years, this is generally not an issue, but in years where resources are scarce wild pigs can exhaust food supplies required by native wildlife, leaving these species with few options to survive.

Mast crops are an important component in population dynamics of many species, including white-tailed deer, small mammals and wild pigs (1, 11, 13, 18). The growth rate of wild pig populations has been shown to be correlated to the seasonal availability of mast producing tree species (3), and the yield of both previous and current mast crops influences the timing of reproduction and the proportion of reproducing sows in a given year (14). A European research team conducted a long-term monitoring study of two populations of wild pigs, one on a 14,800 acre fenced preserve in Italy with low levels of mast crop production and low hunting pressure and the other on a 27,200 acre forest in France with high levels of mast crop production and high hunting pressure to assess how mast crops affect the reproductive output of sows 7. Results of the study found that in both populations, abundant mast crop availability increased body mass, and reproduction. Abundant mast crop availability also led to direct increase in fertility, indicating that wild pig sows adjust their reproductive output to track resource availability (7). Thus, sows born in years with high mast crop production should be heavier the next breeding season and potentially have higher fertility levels and larger litter sizes than sows born in years with low mast crop production (7).

Wild pigs may impact the diversity of tree species found in forests through their consumption of mast crops and their destructive rooting behavior. Since seed number and seed size are generally negatively correlated (10), mast producing species may be more sensitive to consumption by wild pigs simply because they are unable to produce as many seeds as small-seeded species such as grasses (16). Rooting behavior can increase abundance of small-seeded and invasive species such as Chinese Tallow (Triadica sebifera) by creating favorable soil conditions and reducing competition from large-seeded species (16).

Overall, the relationship between native wildlife, wild pigs and mast crop species has been shown to be complex and incredibly interconnected. Wild pigs can effectively compete with native wildlife for these resources and exploit mast crops that many species find unpalatable, increasing their competitive advantage through increased fertility and reproduction. Exotic, invasive wild pigs also have the potential to change the species composition and diversity of forests through their consumption of mast crops, destruction of habitat and proliferation of invasive plant species. Continued wild pig control and damage abatement efforts remain imperative to keep both native wildlife and plant communities healthy and functioning.