Cave myotis roosting in a cluster

White-nose syndrome (WNS) is a disease affecting hibernating bats. The disease, named for the distinct white fungus that appears on the muzzle, ears and/or wing membranes of hibernating bats, has led to widespread mortality of bats in eastern North America. The fungus, Pseudogymnoascus destructans, or P. destructans, grows in cold and humid environments, such as caves where bats are commonly found hibernating.

In February 2006, researchers first documented evidence of WNS in a photograph taken of a bat in Howes Cave just west of Albany, New York. Since then, the fungus that causes WNS has spread north into Canada, and south and westward across the United States.

The fungus spreads from bat-to-bat and can also spread from humans into bat environments. Thus, anyone who works around bats follows the white nose syndrome decontamination procedure to help reduce the spread of the fungus.

The cold-adapted fungus causing the disease irritates the skin of the bat, disrupting its hibernation and causing it to deplete its fat reserves at a faster rate. 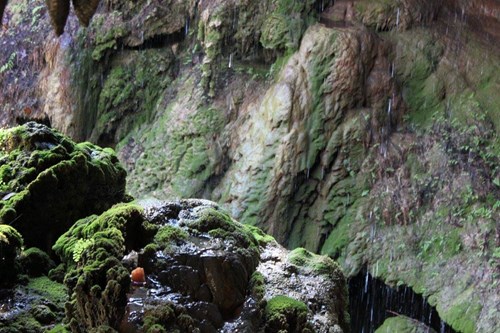 The view from inside a Texas cave.

Where did the fungus come from?

It is assumed that the fungus was transmitted by a person to North America from either a European or Asian country where the fungus is also documented. However, bats in those countries do not develop the disease like the bats in North America.

If the fungus is present, does that mean white-nose syndrome will develop?

As the fungus continues to spread west, more bats are coming into contact with it. Because the disease does not develop within the first year of documenting the fungus, bats in the P. destructans positive column may end up in the WNS positive column.

Have the fungus or the disease been found in Texas?

P. destructans has been found in Texas. Earlier in 2017 it was detected on three bat species in the Texas counties of Childress, Collingsworth, Cottle, Hardeman, King and Scurry.

The WNS disease has not been detected in Texas. 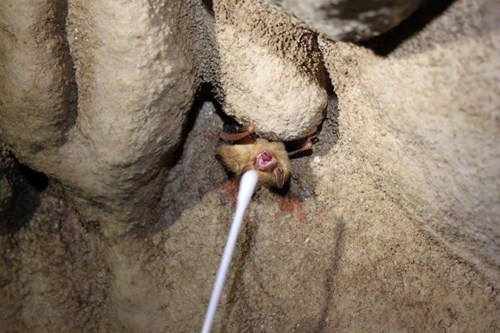 To test for the fungus, bats are swabbed using a sterile Q-tip.

How does the disease affect hibernating bats?

This fungus invades through tissue layers and disrupts the behavior of hibernating bats. Not all bat species are affected the same, however. There are some factors, such as life history (e.g. how long do they hibernate, and do they cluster?) and body condition (e.g. are they a smaller bat?) that affect the outcome. For example, researchers have found that bats that are smaller and wetter during hibernation tend to be impacted more by the disease.

Below are some symptoms indicative of bats having WNS:

Is there a cure for the disease?

No. However, there are some potential interventions being researched. These treatments, some of which include naturally occurring bacteria that seem to limit the growth of the fungus, need to be carefully tested before being used in the environment.