The Texas A&M University Natural Resources Institute, NRI, a unit of Texas A&M AgriLife, has been doing a lot of work researching three unique snakes; the Louisiana pinesnake, the eastern indigo and the massasauga rattlesnake.

“Snakes are vilified, but they are an important part of the ecosystem,” explained Danielle Walkup, NRI research scientist.

“Snakes tend to be in the middle of a food web,” she continued. “They eat smaller things like rodents, so they can help with rodent control and can also be food for bigger things, so they are an important part of the food web. They are unique creatures.”

Most of NRI’s work with the trio of threatened snakes deals with habitat restoration and assessment, partnering on early-stage reintroduction efforts, and pursuing general knowledge about the species.

“For a lot of these species of conservation concern, there’s not a lot of information known about them,” Walkup said. “Our job is to go in and figure out things like how widespread they are, their habitat, genetics, how to catch them, and so on.” 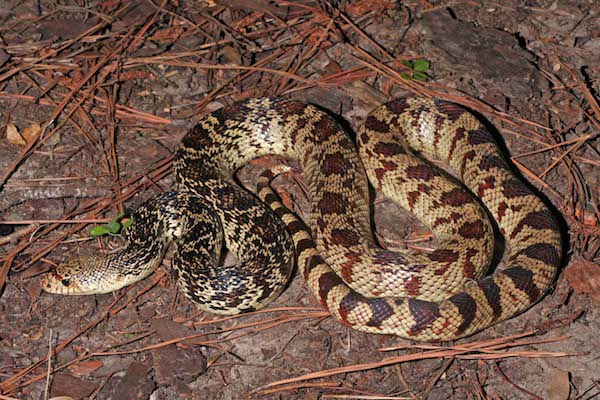 A unique snake and its unique home

The Louisiana pinesnake is a non-venomous burrowing snake that eats small rodents, especially the Baird’s pocket gopher. They are part of the same family that includes other harmless Texas snakes like corn snakes, rat snakes, gopher or bull snakes, kingsnakes and milk snakes.

Despite their name, Louisiana pinesnakes’ historic range includes Texas, where a few small populations still exist. The species is listed as threatened under the Endangered Species Act wherever found.

This unusual snake depends on the uniquely American ecosystem of the longleaf pine forests. They are one of the most ecodiverse habitats in the world after the rainforests, supporting thousands of different species, many of which are not found anywhere else.

These forests used to be the dominant type in the U.S. southeast and stretched for over 90 million acres. Today, there are only an estimated 3 million acres. NRI has several projects focused on restoring this once widespread landscape.

“In Texas, we’ve lost a lot of that longleaf pine habitat, and a lot of it gets overgrown,” Walkup said. “It’s not as open as it used to be. That loss of habitat is one of the major reasons for the loss of the Louisiana pinesnake.”

NRI has been working with partners in the U.S. Forest Service in preparation for Louisiana pine snake reintroduction and translocation. One habitat modeling project led by NRI researchers found that individual Louisiana pinesnakes need roughly 82 square acres of mature longleaf pine stand. The territory needs to have good understory cover for their preferred prey of Baird’s pocket gopher, and sandy well-drained soil.

Despite popular opinion, snakes are shy, reclusive and good at keeping out of sight. This is a problem for those trying to studying them.

Herpetologists — scientists who study reptiles and amphibians — rely on box traps to survey snake populations. These work like wasp traps; a funnel allows snakes to get into the box, an attractive hiding spot, but they cannot easily get back out.

While straightforward, box traps must be checked daily or every other day to record and release trapped snakes. This is labor-intensive and time-consuming. Additionally, many shy snakes like those NRI works with live in places that are hard for researchers to access. This makes checking traps even more difficult.

NRI and researchers from the U.S. Forest Service and other institutions are working to see if camera traps work as well as box traps to find and track Louisiana pinesnakes and eastern indigos for research. Early results are promising. 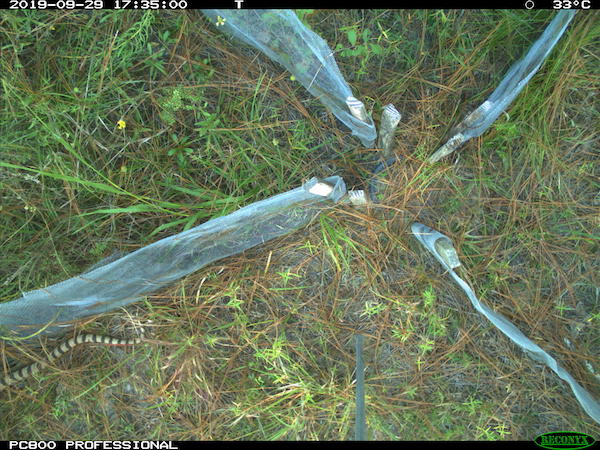 One of the tens of thousands of images captured by camera traps. In this image, you can see the departing tail of a Louisiana pinesnake. (NRI/U.S. Forest Service photo)

“Some of our early testing was done in the Sabine National Forest,” Walkup said. “That was mostly putting out cameras in areas where they have box traps to make sure it is a viable process and determine the cost per effort.”

Researchers found camera traps had three times the snake sightings of box traps. They were additionally more cost-effective for long-term surveying because they only had to be checked once every three weeks.

The rarely seen lord of the forest

The first part of the eastern indigo snake’s scientific name — Drymarchon couperi — roughly means “lord of the forest” in Greek. It earned this name for its impressive size and appearance. Adults are generally 5-6 feet long, heavy-bodied and covered in semi-iridescent black scales with a dark red chin and throat. Like kingsnakes, eastern indigo snakes are nonvenomous and eat other snakes, including venomous snakes like copperheads, rattlesnakes and cottonmouths.

Despite its regal name, the eastern indigo snake isn’t seen much in the wild. Its historic range used to extend from Mississippi, Alabama, Florida, Georgia and into South Carolina. Now it is thought to exist in the wild in only a few counties in Alabama, Georgia and Florida. It was listed as threatened under the Endangered Species Act in 1978.

Part of the snake’s decline is tied to the decline of another species, the gopher tortoise.

“Gopher tortoises are known as keystone species,” Walkup said. “Those are basically species that play an important role in an ecosystem out of proportion to their density or how many individuals are in an ecosystem.”

Gopher tortoises got their name for their habit of digging burrows in sandy soil. These burrows provide housing to hundreds of other species, including the eastern indigo snake.

“We’re in the very early stages of working with the eastern indigo snake,” Walkup said. She explained that NRI has been working with Eglin Air Force Base in Florida on habitat restoration and gopher tortoise translocation in preparation for eventual eastern indigo release efforts. NRI works closely with the Department of Defense on managing military land to preserve habitat like longleaf pine and improve habitat for keystone species like gopher tortoises.

Another area of NRI’s snake-related work dealt with profiling the genetics of a little rattlesnake, the massasauga.

Massasaugas are venomous, thick-bodied rattlesnakes that prey on small rodents. They are smaller than most rattlesnakes, with adults rarely exceeding three feet in length.

In the U.S., there are two massasauga species; the western massasauga found mostly in the southwest, Texas and central plains, and the eastern massasauga, which extends from the Great Lake states up into Canada. Eastern massasaugas are listed as threatened under the Endangered Species Act.

When the western massasauga was petitioned for listing under the Endangered Species Act, petitioners thought it was two subspecies. There are many visual differences in western massasaugas found primarily in Arizona, Colorado and New Mexico, and those found more widely in New Mexico, Texas and the central plains.

Walkup explained that NRI conducted a genomics project to get a better understanding of the western massasaugas. They found that, despite distinct visual differences of snakes from different areas, they are likely one species. The listing petition for the western massasauga was withdrawn as a result of this finding.

While this might not seem like conservation in the usual sense, Walkup said it was important to conservation overall.

“Research like that influences the U.S. Fish and Wildlife Service decisions, and our work had a direct impact on conservation,” she said. “Being able to focus that protection for species that really need it helps conserve resources. I think that is one important aspect of our research.” 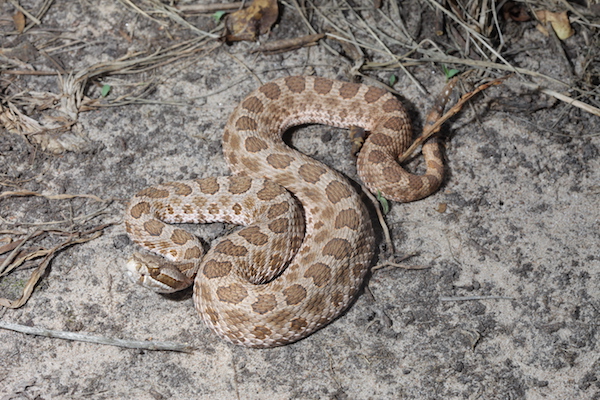 Dr. Toby Hibbitts joined the Texas A&M Natural Resources Institute in 2012 as a research scientist. His research program focuses on amphibians and reptiles. He is interested in natural history, ecology, behavior and taxon…

Danielle joined the Texas A&M Natural Resources Institute in August 2018 as a post-doctoral research associate. As part of the herpetology team, her research focuses on understanding the natural history of herps including…