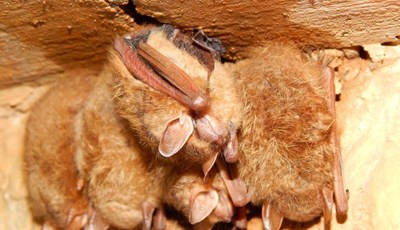 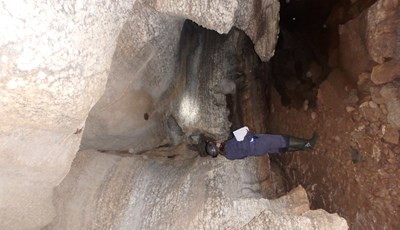 White-nose syndrome (WNS) is a disease affecting hibernating bats. The disease, named for the distinct white fungus that appears on the muzzle, ears and/or wing membranes of hibernating bats, has led to widespread mortality of bats in eastern North America. The fungus, Pseudogymnoascus destructans, or P. destructans, grows in cold and humid environments, such as caves where bats are commonly found hibernating.

In February 2006, researchers first documented evidence of WNS in a photograph taken of a bat in Howes Cave just west of Albany, New York. Since then, the fungus that causes WNS has spread north into Canada, and south and westward across the United States.

The fungus spreads from bat-to-bat and can also spread from humans into bat environments. Thus, anyone who works around bats follows the white nose syndrome decontamination procedure to help reduce the spread of the fungus.

The cold-adapted fungus causing the disease irritates the skin of the bat, disrupting its hibernation and causing it to deplete its fat reserves at a faster rate.

As the fungus continues to spread west, more bats are coming into contact with it. Because the disease does not develop within the first year of documenting the fungus, bats in the P. destructans positive column may end up in the WNS positive column. On-going research projects aim to monitor the spread of the disease and potentially find a treatment for bats in Texas, a state with the greatest bat fauna diversity in the U.S.

Most recently, our research provides a better understanding of what factors affect the microclimate near roosting bat species, like the declining tricolored bat (Perimyotis subflavus), to aid roost site conservation and management.

Melissa Meierhofer joined the Texas A&M Natural Resources Institute in 2015 as a research associate. Her research is focused on understanding the susceptibility of winter-roosting bats to white-nose syndrome, a cold-adapt…

Irma leaves plenty of food and water for key deer

If you’re worried about Florida Key deer dying of thirst or starvation following Hurricane Irma, an expert on the tiny creatures has one word of advice: don’t.

For the past several months, a Texas A&M University System institute has been actively involved in efforts to quash a screwworm outbreak in Florida that has jeopardized an already endangered species.