Citizen science: How a community saved the Key deer

Citizen science: How a community saved the Key deer

The meaning of Community transformed with the introduction and expansion of social media. The digital age now allows people to experience community beyond physical location and provides a virtual space to connect and share beliefs or interests with the tap of a finger. The social media giant Facebook helped pioneer this new interconnected age with special features specifically designed for community, and in this case, ultimately provided opportunities for an imperative kind of citizen science. 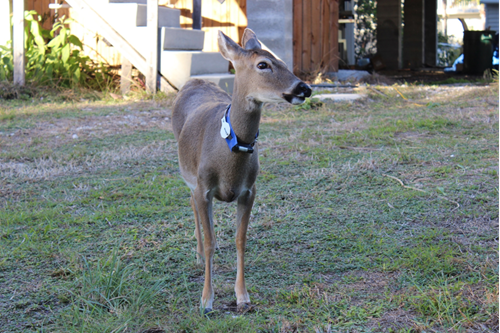 For residents in the Florida Keys, Facebook played an integral part in sharing pictures and information about one common interest—an endangered white-tailed deer subspecies, the Key deer (Odocoileus virginianus clavium), that are endemic to the Keys. Colleen Fuller, founder of the public Facebook group “We Love Our Key Deer,” first created the page during the 2016 New World screwworm outbreak when she noticed her neighbors posting on their personal Facebook pages about seemingly unhealthy deer nearby. The group quickly became the go-to site for locals to help connect U.S. Fish and Wildlife Service (USFWS) managers to deer in need and to spread awareness of the species. Now, the page boasts over 3,000 members who share photos, helpful tips to keep the deer safe, ask questions about the species and provide updates on spotted sick or injured deer.

In a recent turn of events, a group member reached out to Fuller after finding a radio-tracking collar, used in a previous Key deer study by NRI director Dr. Roel Lopez. NRI and its Texas A&M University affiliates have been involved with Key deer for many years, dating back to the 1960s when retired wildlife professor Dr. Nova Silvy began his dissertation work on the species. Talk about reclaiming the past. 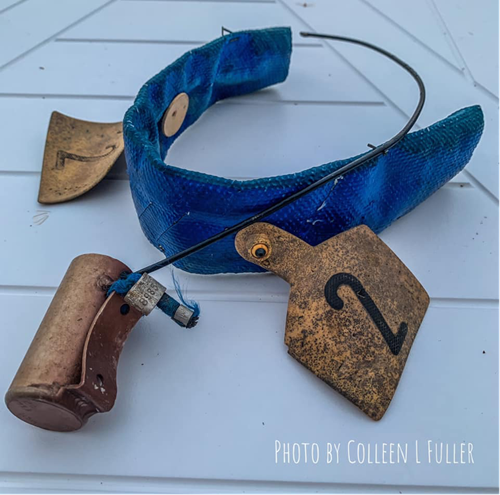 Giving context to this long history, the National Key Deer Refuge was created in 1957 when deer populations sank to an estimated 100 individuals, prompting the need for comprehensive ecological studies to better understand the species and how to manage for them. Dr. Silvy’s studies analyzed the Key deer’s range, habitat use, movement patterns and reproduction success, which were later replicated by Dr. Lopez in the late 1990s.

The discovered tracking collar was from Dr. Lopez’s dissertation project and was one of several collars used to track individual Key deer throughout the duration of his study. Through this technology, data such as habitat use, range and movement patterns of individual deer can be traced, providing valuable information for researchers. This particular collar, for instance, was attached to an adult male and transmitted location data for a year. Once the battery on the collar stops transmitting data, the unique printed number on the collar continues to provide information; visual monitoring of the marked individual can continue to take place as long as the collar stays intact. Long-term monitoring has helped researchers determine variables like life span—leading us to understand that male Key deer generally live between 7 to 12 years and females between 12 to 20 years.

During the screwworm outbreak, NRI researchers again used radio-collars to assess rapidly changing population numbers. This effort, however, focused on pregnant female deer, or doe, to understand screwworm fly infection rates and reproduction success during the spring fawning period. Keys residents played a vital role during this particular effort by assisting in the rapid screwworm control and eradication plan. Local citizens assisted in deer treatment by feeding neighborhood deer dosed pieces of bread with dewormer and then marking the deer with natural hair dye to indicate which had received treatment. Dozens of concerned citizens also began sharing sightings of infected deer on the Facebook group page, helping USFWS managers locate and treat deer quickly. If it were not for the cumulative community involvement, NRI research and USFWS managers’ screwworm fly eradication efforts, controlling the spread of screwworm may not have been possible. 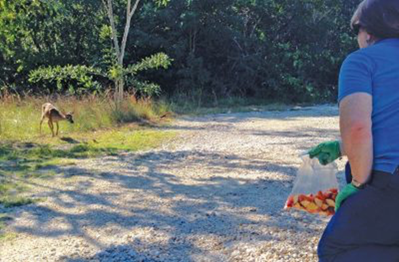 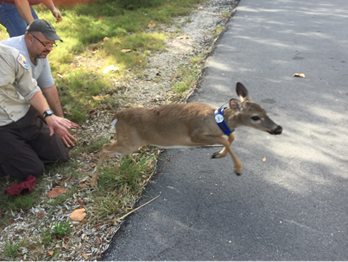 Bottom: A deer being released after being collared from the screwworm outbreak study. Photo: Alison Lund

Today, NRI researchers continue to conduct Key deer abundance surveys in order to track population numbers. Continued research and monitoring is important in light of recent natural disaster events, such as hurricane and disease outbreaks, which can greatly affect the long-term survival of sensitive yet resilient species. The integration of citizen involvement into management efforts benefited the Key deer greatly over the past few years, as demonstrated during the screwworm outbreak, and is likely to expand in years to come.

Those interested in keeping up with the Key deer can join Fuller’s group “We Love Our Key Deer” on Facebook.

Recent news and research conducted by our team can be found below.

Layne Mustian joined Texas A&M Natural Resource Institute in February 2018 as a student technician. As a member of the engagement team, her work focuses on bringing attention to various NRI projects through blog articles,…