The Sounds a Quail Makes

Page 1: A View of a Male Bobwhite Quail Singing While Perched on a Fence Post 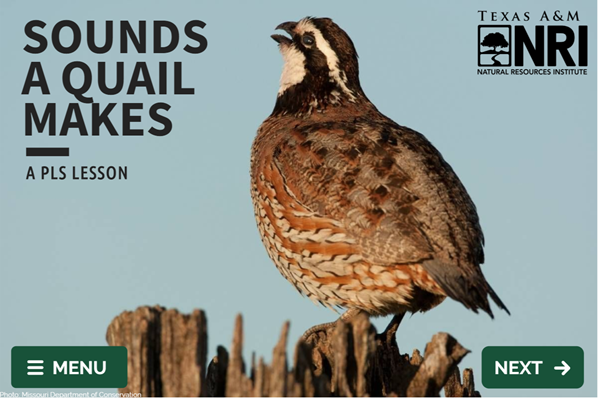 Page 2: A View of a Female Montezuma Quail 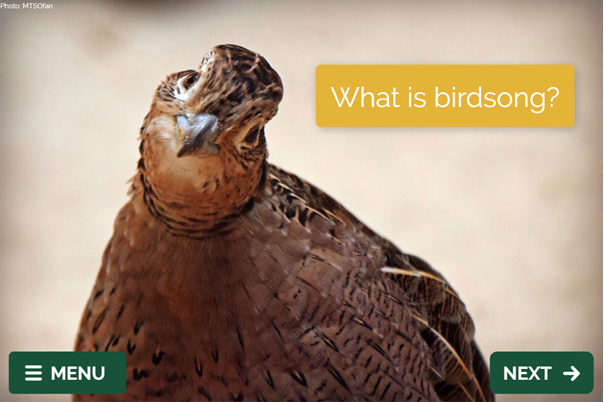 Above: A screenshot of the What is birdsong page from the lesson, showing a female Montezuma quail and a button asking, “What is birdsong?” An explanation is included below.

When we talk about birdsong, we are not referring to a single type of sound a bird makes but a complex series of notes that are, in a way, almost their own language. These songs are generally made by males to attract mates and to defend their territory. So how do birds make these amazing sounds? 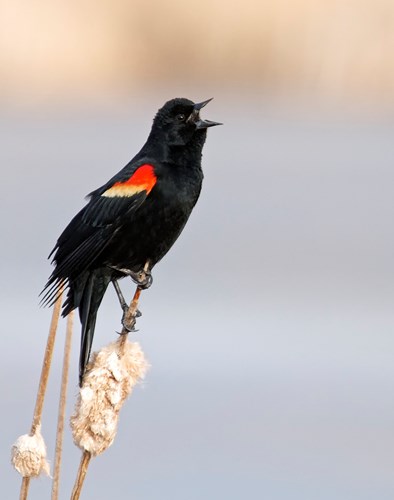 Above: An image of a male red-winged blackbird singing while perched on a cattail. Photo credit: Chris Smith

Birds are able to produce these complex sounds because they have a special sound producing organ, or "voice box", called a syrinx. The syrinx has a paired structure that allows them to sing two different notes simultaneously and to quickly make broad changes in their pitch. The exact structure of this organ can vary between different species, which helps create the extreme diversity we can see in birdsong.

Birds tend to have a large repertoire of both songs and calls, but what is the difference between the two? Continue on to the next page to find out.

Page 3: A View of a Scaled Quail Walking Through Grasses and Forbs 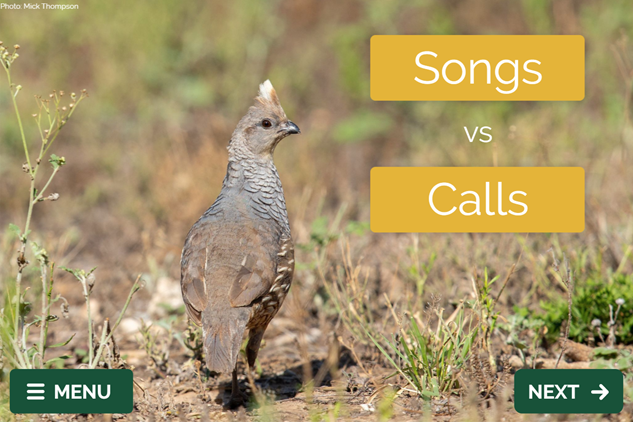 Songs tend to be more complex than calls and have a clear pattern, structure and rhythm. Birds will usually repeat songs continuously with a single theme, but they may also have variations. Birdsong is mainly used in relation to mating behaviors, whether that means defending territory, attracting potential mates or bonding with mates and young. For this reason mainly the males of species will sing most often, but not all birds sing! You can generally tell if a species will sing or not by its breeding habitat. 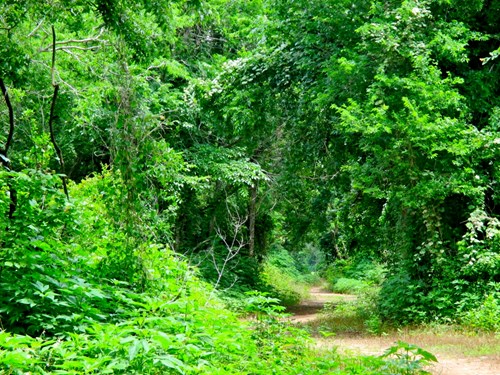 Above: An image of a dense forest. Photo credit: Paul Cooper

Birds that breed in low visibility areas (such as the dense forest pictured above) will usually sing since they cannot see each other as easily and because sound is a more reliable form of communication compared to visual cues. 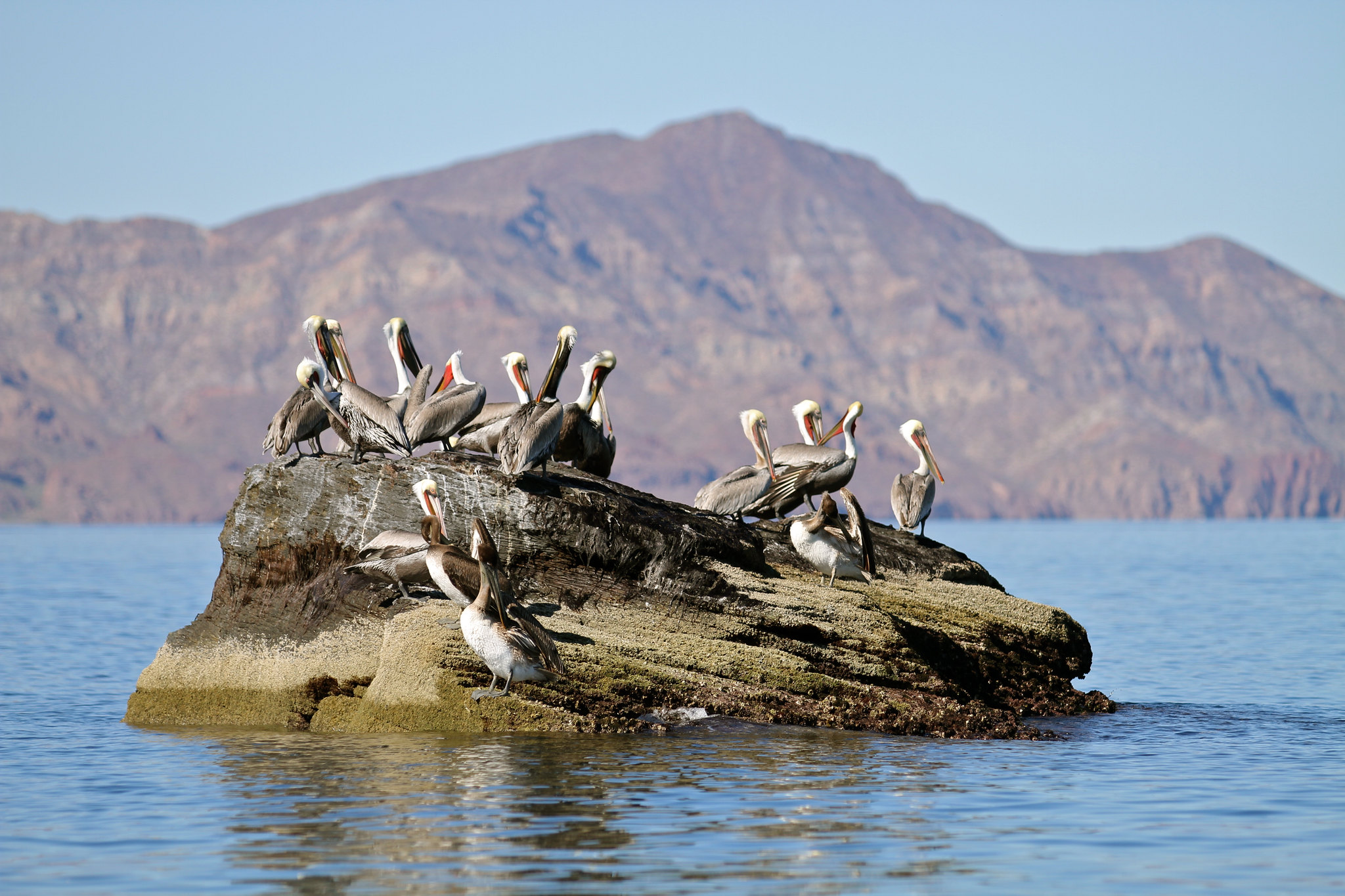 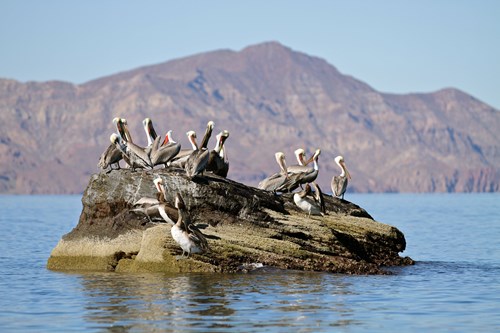 Above: An image of a flock of pelicans perched on a small rock in the ocean. Photo credit: Nathan Gibbs

Birds that breed in open, high-visibility areas (such as the small, rocky island pictured above) generally don't sing since they are able to see each other more easily. This allows them to rely more on calls and visual cues for communication.

Calls tend to both shorter in length and simpler in structure than songs. Calls also tend to be made by both sexes in many species and are heard throughout the year, not just during the breeding season. Birds usually have a wide range of calls they use in specific situations to communicate with one another.

Alarm or warning calls are used to warn each other of potential threats. These calls tend to be short and sharp (as you can see in the video below). They are often relatively quiet and high pitched so that an individual can warn others without the call carrying very far and alerting a predator of their location.

Contact calls are used by birds to keep in touch with one another and can usually be heard while individuals are foraging for food (as you can hear in the recording below). These calls can get louder and more urgent, turning into "separation calls" if individuals cannot find one another.

Flight calls are used by individuals to communicate back and forth while in flight. These calls tend to be highly musical and usually announce flocks as they pass overhead, as you can hear in this audio clip of Canada geese flying overhead. 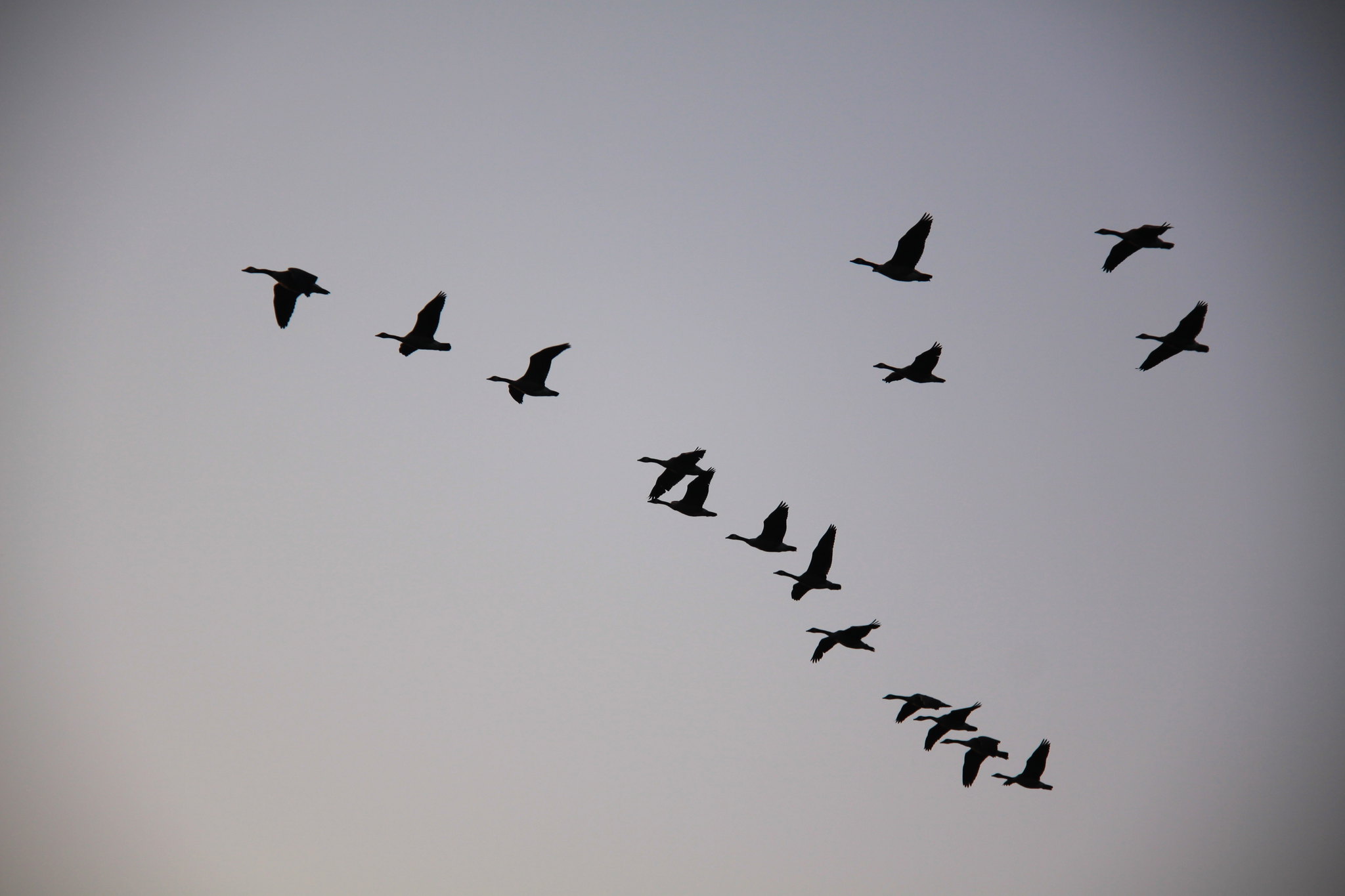 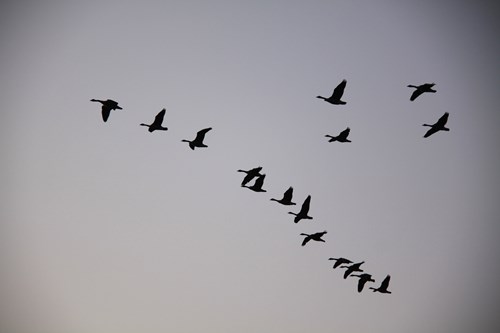 Above: An image of a flock of Canadian geese flying overhead. Photo credit: Herbling

Begging calls are used by young birds as a "feed me" noise to get the parents' attention. These calls tend to have regularly repeated notes and be quite high pitched.

Page 4: A View of a Male Bobwhite Quail Standing Among Some Grass and Forbs 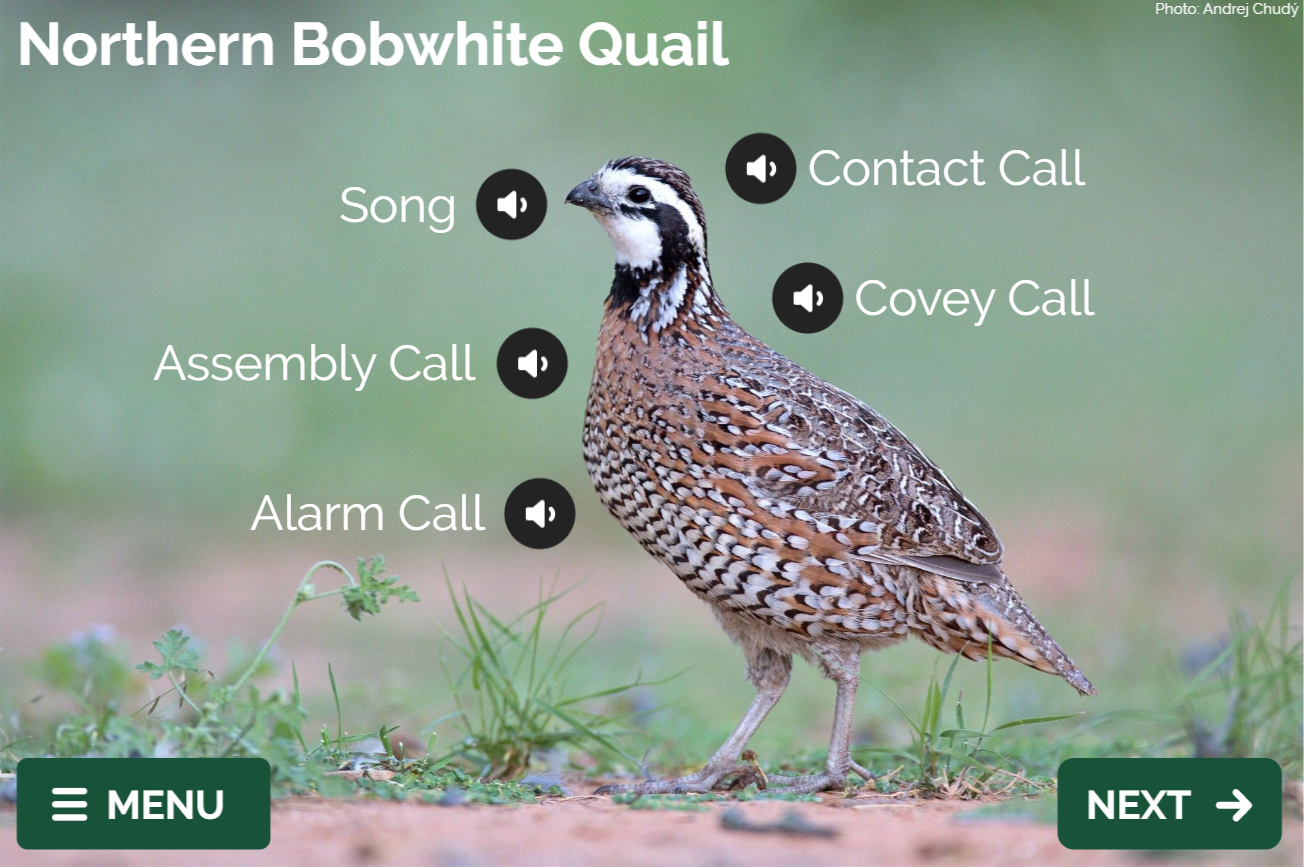 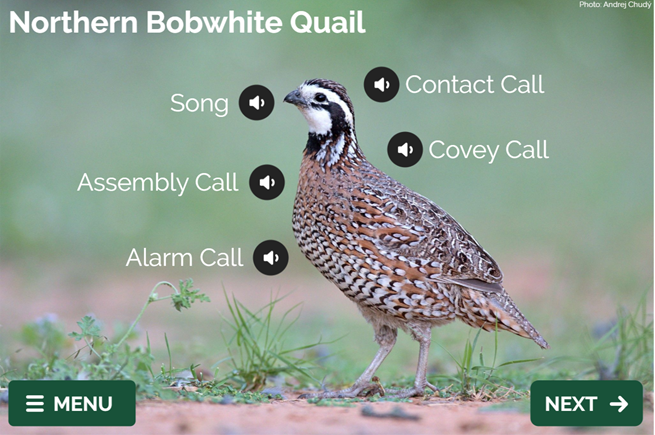 Above: A screenshot of the Bobwhite quail sounds page from the lesson, which highlights some of the important sounds bobwhite quail make. Interactive elements are labeled, and the content from each element is included below.

The whistled "Bob-WHITE!" or "Poor-Bob-WHITE!" song (shown in the video below) is an iconic sound that used to be heard across the Texas prairies and grasslands, but it has become increasingly rare due to the continuing decline of quail populations throughout the state.

This song can be made by both males (roosters) and females (hens), but is mainly used by males during the spring breeding season. When a rooster sings it can stimulate other roosters in the area to begin singing and trigger what is called antiphonal calling.

When a hen is ready to mate she will make a call that sounds very similar to the assembly call, but the notes are slightly slower and more drawn out than the normal assembly call.

This spring song is not only a joy to listen to; it can also be incredibly useful in helping to gauge the breeding abundance of birds on your property. The best way to collect this kind of information is by conducting a spring whistle count during May or early June. Once you have enough data, interpretation id quick and easy and allows you to track trends in your breeding "capital". These efforts are well worth your time to be able to see if your management is benefiting quail.

The assembly call is can commonly be heard after a covey of quail has been dispersed. Quail are quite the social bird once they have joined a covey for the fall, and the main function is to call members back to the group.

When a quail senses a threat they will begin to give an alarm call. This call has very rapid notes and can vary in the speed and number of syllables based on the type of threat they perceive.

Each covey will have a designated leader. When the group faces a potential threat the leader will make a "tick-tick" call to help guide them away from danger.

Roosters and hens will use both sharp whistles and softer contact calls to keep in touch with one another as they move and forage throughout the day. Adults will also use a soft tu-tu-tu call to point out potential food items to young chicks.

If a quail chick is in distress it will make a distress or separation call. When adult quail hear this sound they will readily come to the aid of the chick and try to fend off any potential threats.

During the fall quail will form their social groups, called coveys. The covey call is the sound they will make as they wake up each morning, and it can generally be heard approximately 40 minutes before sunrise.

Covey call counts can be used to estimate the size of the fall population or to provide a measurement of how many birds you should be hunting on your property. All it takes is getting up early, listening and recording. Our video on morning quail counts delves into the exact methods so you can better estimate your property's quail population.

Page 5: A View of a Male Gambel’s Quail Perched in a Tree 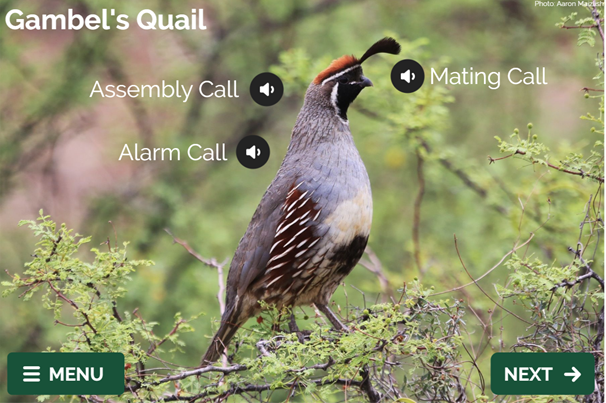 Above: A screenshot of the Gambel’s quail sounds page from the lesson, which highlights some of the important sounds Gambel’s quail make. Interactive elements are labeled, and the content from each element is included below.

Gambel's quail form coveys that usually consist of an adult pair and up to 16 young that will occupy a home range well into the fall months. In the winter months it is not unusual for several coveys to combine and feed together. Roosters and hens will both give a distinctive 3-4 note assembly call when they become separated from their covey members.

Individuals will start to make a "chip-chip-chip" call when they sense potential threats near the covey. If there is a direct threat to an individual or the covey, the birds will give a "crear-crear" or squawk alarm call as they flush away from danger.

During the breeding season, Gambel's quail roosters will find an elevated perch - often a shrub, tree or fence post - to make their mating call. This call consists of a "puk-kwaw-cah" call or a simple kaa and announces their availability to potential mates.

Page 6: A View of a Male Montezuma Quail Perched on a Rock 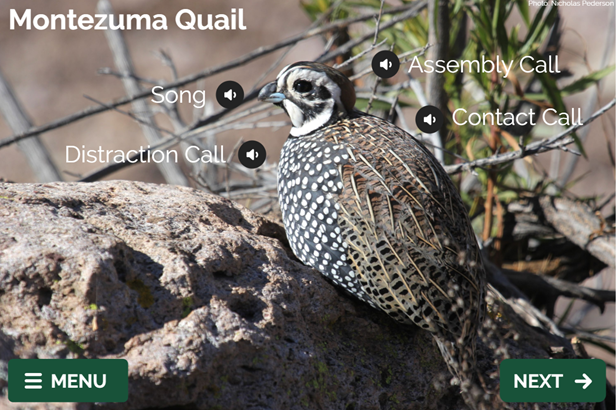 Above: A screenshot of the Montezuma quail sounds page from the lesson, which highlights some of the important sounds Montezuma quail make. Interactive elements are labeled, and the content from each element is included below.

Montezuma quail are quite secretive in nature and their song can be a bit eerie if you don't know what you are hearing while out in the field. The rooster will sing to advertise his territory to potential mates and rivals. Their song is described as  a quavering whinny that sounds similar to an Eastern Screech-Owl whinny, or as having a descending whistle combined with a short buzz at the end.

It will carry quite far for being so soft, so if you hear it as you're hiking around your property, the quail may be farther away than you think.

Montezuma quail chicks are able to feed themselves almost immediately after they hatch, but they still need protection from their parents until they are fully grown. If the young become threatened, the parents will perform a distraction display and call to try to draw away potential predators. 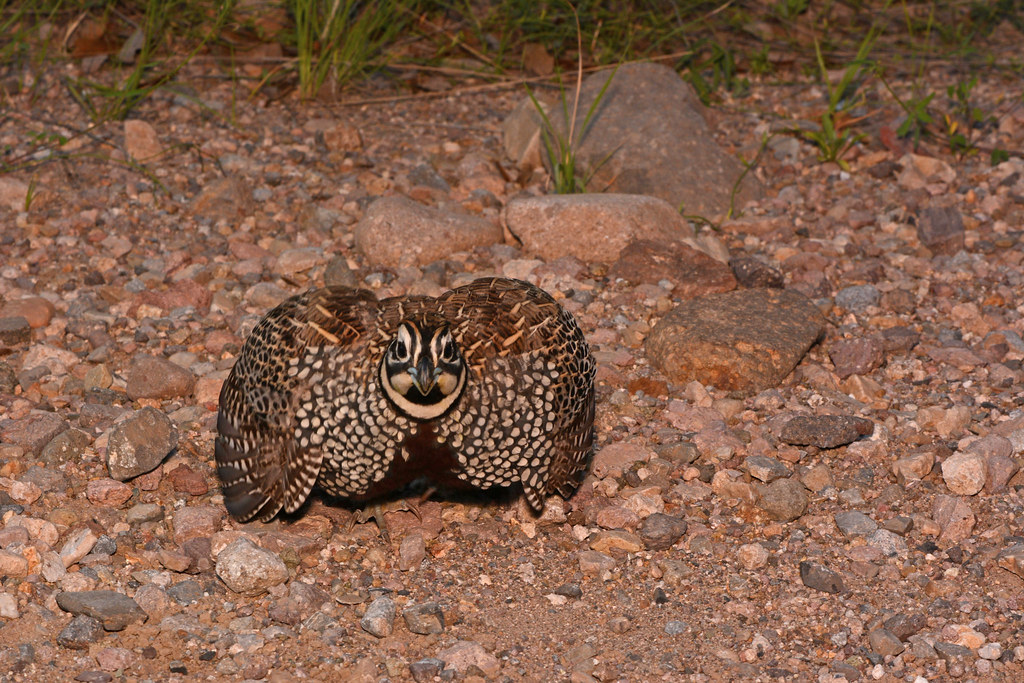 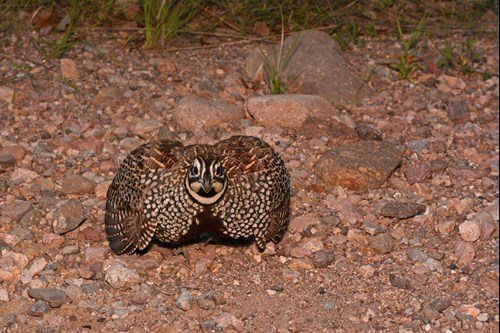 Above: An image of a male Montezuma quail performing a distraction display. Photo credit: Andrew DuBois.

Montezuma quail assembly calls usually consist of a series of nine notes of quavering metallic whistles followed by a nearly inaudible ending. Roosters, hens and chicks will use this call to regroup with their covey after being flushed. This call has been described as "ventriloquial" because it can be difficult to determine the location of the bird based on the direction of the call.

When Montezuma quail are foraging together they will cluck or make a "low chitter." These sounds will promptly cease when a covey sense any potential threats.

Page 7: A View of a Scaled Quail Perched in a Tree 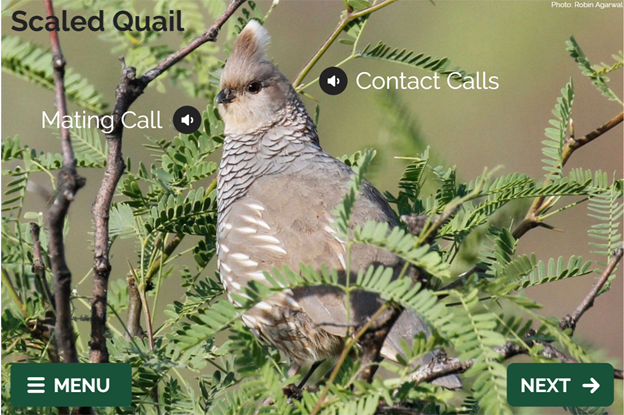 Above: A screenshot of the Scaled quail sounds page from the lesson, which highlights some of the important sounds Scaled quail make. Interactive elements are labeled, and the content from each element is included below.

The mating call of scaled quail roosters is quite simple compared to the 2-3 note song of the northern bobwhite. Roosters will give either a repeated, squealing "whock!" call or a "whock!" with an added "chip-churr" during the breeding season. You will most often find them perched on top of a fence post as they try to attract females.

Scaled quail roosters tend not to call as frequently as bobwhite roosters, but you can still use spring whistle call counts to get an idea of the breeding population abundance on your property.

The most frequently heard call roosters and hens will make is the "chip-chir" or "tuck-too" call. This a nasally and rhythmic call with a higher first note and a lower second note. In western parts of Texas, locals will sometimes call this the "Pe-cos" call in reference to the Pecos River.

WHEN YOU’RE READY, TAKE THE QUIZ!