The call of the open road, passing lanes with 80 mph speed limits, bluebonnets and yellow Mexican hats clustered along the medians, making our way back to open spaces—it’s springtime in Texas and road trip season is upon us. While speed limits are more like suggestions to most native Texans, no matter your destination, there’s a familiarity in those vast stretches of highway, seemingly rolling on for miles and having always been there, allowing Texas to grow up around them.

Fewer characteristics of Texas become more apparent than the time it takes to leave the city and the stark contrast from bustling traffic and overpasses to those open rural roadways working away from denser populations. With every hour and new county line, green population signs and local dives reveal smaller communities and how the greater part of our population resides in the large urban centers mainly located in the Texas Triangle and border towns such as El Paso and Brownsville.

As the lanes become fewer and more friendly, our Texas Land Trends research tells us the cattle grazing and pasturelands we look out across from our perch behind the wheel make up about 104 million acres of all working lands in the state, making cattle among the top contributors to the agriculture sector and economy.

So, what do large urban centers and some grazing cattle have to do with a road trip?

Rolling it back over 150 years ago to when Texas officially joined the U.S., after Spanish cattle were introduced to Tejas in the 18th century and eventually prospered as free-ranging herds, numerous cattle trails popped up over the state as opportunistic cattlemen drove the thriving roaming cattle populations to profitable market outlets in northeastern states. These drives become a cornerstone in creating the “golden age of the cowboy” following the Civil War, with an estimated 10 million Texas longhorns moved to market, in total.

The cattle trails they traversed emerged with consideration of reliable supply points and avoidance of hazards such as attacks from Native Americans and rustlers, treacherous river crossings and unforgivable landscapes, in addition to landowner conflicts along the way. You might have guessed how those supply posts have evolved over time as we think back to those densely populated areas we passed through a few hours ago.

Our Texas Land Trends team is constantly exploring the history of Texas to make projections and analyze trends in growth and expansion. Depicting their latest discovery, they’ve developed a new roadmap for your next trip outlining the major Texas cattle trails so that you may follow along as you compare the landscape we know today to these historic remnants of what defined our state in centuries past. While we won’t be enduring the long days and harsh conditions cowboys and vaqueros experienced during cattle drives, we can certainly appreciate the vast lands they covered as we drive up I-35 and value the economic success that cattle ranching has afforded our state.

Texas’ inherent identity and heritage is built on a unique economy and the foundation and way of life can be found along every familiar road you may take this spring, evolving with time, wearing grit and a straw hat well. 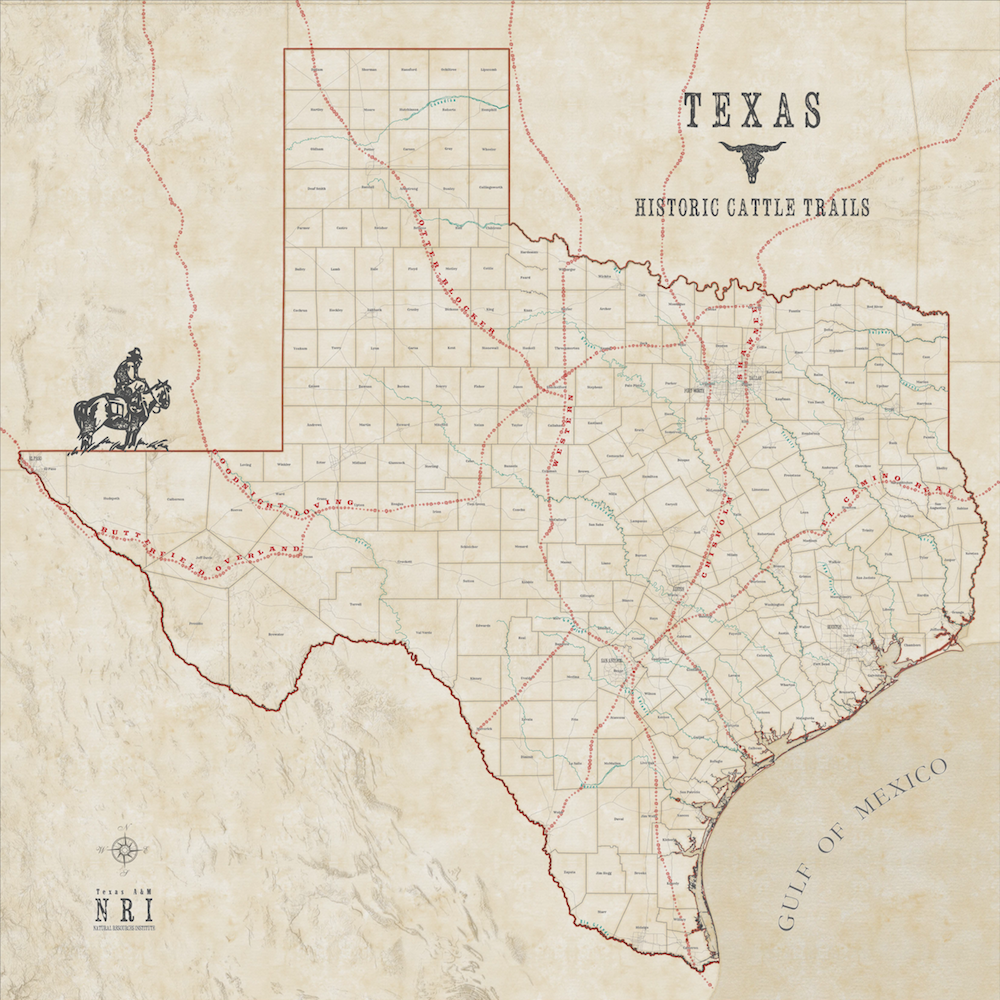 As you study the map above, take a look at the history of each trail below.

Butterfield Overland Trail (Mail Company) - a consortium of four “Pony Express” companies: Adams, American, National, and Wells, Fargo - signed a six-year contract with the U.S. government on September 15, 1857. The Butterfield (or Oxbow) Route went from St. Louis, Missouri, through El Paso, then west to Los Angeles. Most of the Butterfield Overland Mail line would be disrupted and destroyed by Confederate troops during the Civil War.

Chisholm Trail - Originating south of San Antonio, Texas, the trail ran north across Oklahoma, and ended in Kansas. Between 1867 and 1871 about 1.5 million head of cattle were driven north along the trail. The trail’s importance declined after 1871, as railheads were established.

El Camino Real – “Royal Road”. During the Spanish colonial period in North America, a collection of indigenous trails and trade routes became known as El Camino Real de los Tejas, the primary overland route for the Spanish colonization.  Soldiers used the trail during the Mexican Independence and the Texas Revolution conflicts. The use of the trail diminished after Texas became a state in 1848.

Goodnight-Loving Trail - The trail ran southwest to connect with the Pecos River and thence up the river valley through New Mexico and north to the railhead at Denver, Colorado. The trail was established in 1866 by cattlemen Charles Goodnight and Oliver Loving, who followed a route of the Butterfield Overland Mail. The arrival of the railroads to western Texas in the early 1880s made the long cattle drives unnecessary. The trail’s role in Texas history is celebrated in Larry McMurtry’s 1985 novel Lonesome Dove.

Potter-Blocker Trail - In the spring of 1883, Alfred T. Bacon, manager of the New England Livestock Company, purchased a herd of 3,000 Mexican cattle for delivery at Cheyenne, Wyoming. He received the herd at Peña Station, near Hebbronville, Texas, and hired Jack Potter to trail them north. Following the Western Trail, he received word to leave the Western and try a cutoff that might save some twenty days' trailing time. Abner P. Blocker used part of the same trail after 1885 to move cattle from the south into the sprawling XIT Ranch, hence the later designation of Potter-Blocker Trail.

Shawnee Trail - Used before and just after the Civil War, the Shawnee Trail gathered cattle from east and west of its main stem, which passed through Austin, Waco, and Dallas. The drovers took over a trail long used by Indians in hunting and raiding and by southbound settlers from the Midwest; the latter called it the Texas Road.

Western Trail - The Western Trail, also known as the Great Western Trail, Dodge City Trail, and the Fort Griffin Trail, was blazed in 1874 by cattle-drover John T. Lytle, who herded 3,500 longhorn cattle along the leading edge of the frontier from South Texas to Nebraska. Lytle's route supplanted the farmer-laden Chisholm Trail to the east. By 1879 the Western Trail was the principal thoroughfare for Texas cattle bound for northern markets. 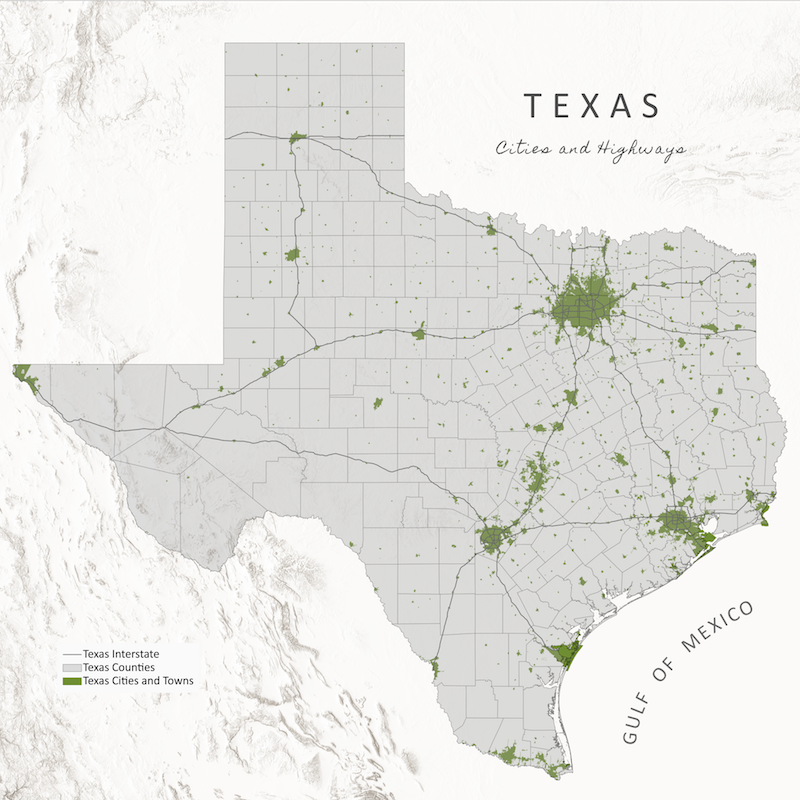 After studying the historic cattle trails of Texas, we wanted to get a better look at how the old trails compare to today's urban centers and highways. Compare the two maps to see how Texas has evolved over the last few centuries.