First introduced from Europe as a reliable food source in the 16th century, free-ranging and escaped domestic swine established initial populations of feral swine in the United States.  Eurasian boar (Sus scrofa) brought to North America in the early 1900s for hunting purposes soon interbred with feral swine creating the hybrids we see today (Larson et al. 2005).  These invaders now occur in three varieties across North America: feral swine, Eurasian boar and their hybrids.  As growing populations of feral swine encroach upon an expanding human-wildland interface, there is increased potential for these animals to interact with humans.  Such interactions, both directly and indirectly, have led to conflicts including an estimated $1.5 billion in annual damages to agriculture across the nation (USDA APHIS 2020).

Control efforts for wild pigs generally focus on reducing damages and populations of this highly invasive species through legal control measures.  The success of both lethal and nonlethal abatement efforts often depends on understanding the activity patterns and behavioral modifications of wild pigs in response to both environmental conditions and human pressure.  One means of understanding wild pig biology and behavior is turning to their not-so-distant relatives, Eurasian boar.  Here, we will examine the differences between North American feral swine and Eurasian boar research focused on the activity patterns and behavioral modifications of these animals in response to both human control efforts and environmental influences.

Feral swine are generally nocturnal animals and are often most active at night when environmental conditions may prove optimal for movement.  Features of their anatomy allow them to excel in searching for resources in the dark, as their highly sensitive noses and acute hearing are well adapted to nocturnal behavior.  However, under certain environmental conditions and also in regions with little abatement pressure, feral swine have been known to exhibit crepuscular (activity during dawn and dusk) and even diurnal (daytime) behavior.  A 2017 study used over 400,000 GPS locations of feral swine from 13 different studies over six states to examine the effect of meteorological conditions, landscape attributes, and temporal variables on movement rates and home range size (Kay et al. 2017).  Researchers found that meteorological variables such as temperature and pressure along with landscape features, specifically accessibility to water, had the greatest effect on activity across multiple temporal scales.  One factor that played a highly influential role in wild pig movement and home range size was atmospheric pressure.  The results of the study suggested that higher pressures (such as those preceding a frontal boundary) were optimal for wild pig movement with pressures ranging between 97,500 and 101,250 Pa (Kay et al. 2017).  Even during periods of highest human interaction, the times in which wild pigs were most active showed the greatest correlation to fluctuations in atmospheric pressure (Figure 1). 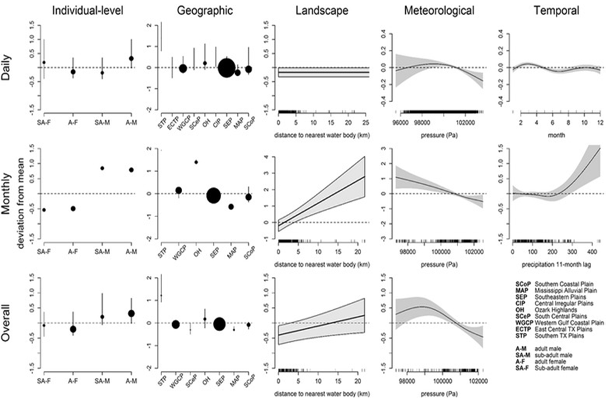 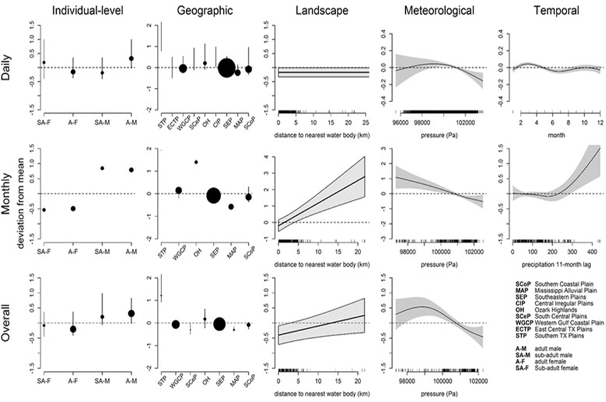 Figure 1. Relationships between significant variables for the average maximum daily distance analyzed from wild pig location data in the southeastern U.S. from 2004 to 2016 across temporal scales (Kay et al. 2017).

Additionally, temperature was found to be highly influential on feral swine activity times, with extreme high and low temperatures causing reductions in movement.  A similar study conducted using 25 individuals equipped with GPS collars in southern Texas found that feral swine increased activity during warmer periods of the growing season from January-April (Campbell and Long 2010).  Cold snaps and intense heat caused a sudden reduction in overall wild pig activity, however, movement increased by 7:00 PM.  The majority of all movement observed in the study was nocturnal activity (Campbell and Long 2010).  Both studies indicated that trapping success, especially during warm summer months, may be directly influenced by the trap’s proximity to a water source.  Campbell and Long (2010) found that wild pig activity during periods of extended high temperatures, such as the months of May-August in Texas, was greater when feral swine were in closer proximity to water bodies and believed that trapping success may increase when conducted near water sources

Similar to feral swine of North America, Eurasian boar cause significant agricultural damage in Europe and Asia spreading disease to domestic livestock and destroying croplands.  In an ongoing effort to control this native nuisance species in Europe, researchers turned their interest towards understanding the effect of environmental conditions and human interactions on Eurasian boar activity patterns.  Research conducted in both Italy and France suggested that activity levels of Eurasian boar were highly influenced by temperature, humidity, and phases of the moon (Brivio et al. 2017).  By tracking Eurasian boar movement using radio telemetry, researchers sought to gain an understanding of how both meteorological conditions and human interactions through hunting and trapping affected activity patterns and temporal movements (Keuling et al. 2008).  Results suggested that diurnal activity is influenced most heavily by seasons, rather than by hunting or trapping efforts.  Data showed the highest levels of daytime activity occurred in the absence of any human activity and during the months of May, June, and July at an average of 22.9% (Figure 2). 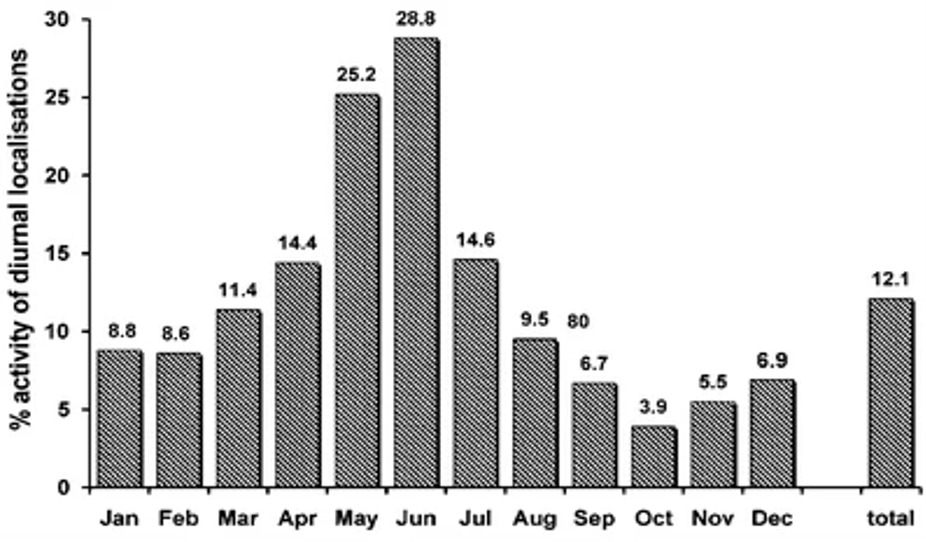 Figure 2. Seasonal variation in the diurnal activity of Eurasian boar throughout the year based on radio-telemetry locations (Keuling et al. 2008).

Throughout the three highest months of crepuscular and daytime activity observed, the proportion of Eurasian boar movement during the day was still less than a quarter of total activity.  Results suggested that human influences including hunting did not directly influence nocturnal habits, although, it was observed that sustained hunting pressure did direct Eurasian boar to exhibit increasingly nocturnal behavior (Brivio et al. 2017).  The study further cited that moonlight, temperature, and relative humidity all had a greater influence on the movement patterns of Eurasian boar than hunting, trapping, or general human interactions.  Observations of European boar are generally consistent with that of North American research, and land managers can draw implications from the documented activity patterns of both Eurasian boar in Europe and North American wild pigs.

Research pointed to atmospheric pressure, temperature and relative humidity as having the greatest influence over the movement times of both North American feral swine and Eurasian boar (Kay et al. 2017; Brivio et al. 2017).  This aligned with previous research that showed daytime activity was most influenced by seasonal factors including temperature, resource availability and proximity to permanent water sources and not by hunting or trapping pressure (Phillips et al. 2013; Keuling et al. 2008).  While one study found that crepuscular activity occurred more frequently in Eurasian boar during late spring and early summer, North American feral swine remained primarily nocturnal throughout most of the year (Kueling et al. 2008).  This carries implications for landowners, as control efforts should generally be focused on identified times of greatest activity to effectively reduce populations and damages.  It is important to note that such times can vary seasonally and across each specific situation, but understanding when, where and why these animals are most active is paramount to reduction efforts. 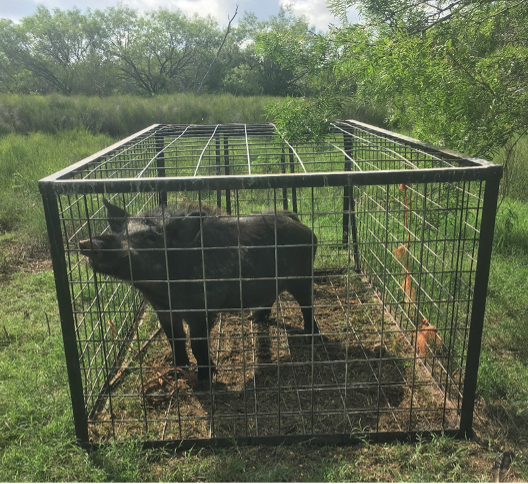 Recognizing that environmental factors such as increased moonlight and relative humidity can result in greater nocturnal activity may allow resource managers to focus control efforts on times of greatest wild pig movement.  Similarly, identifying the impacts of pressure changes and temperature fluctuations and timing efforts to optimal atmospheric conditions may also result in better timing of control efforts.  For example, weather conditions such as intense cold periods, lower atmospheric pressure, and high humidity were shown to cause a reduction in overall feral swine and Eurasian boar movement (Campbell and Long 2010; Kay et al. 2017; Thurfjell et al. 2014).

Resource availability can also have a significant effect on the success of control efforts that require the use of bait. In times of high resource availability, feral swine generally travel less in search of food and are less likely to visit baited trap or strategic shooting locations.  As a result, success is likely to decrease due to an overall reduction in movement and foraging.  However, in times of low resource availability, feral swine generally travel greater distances in search of food and are more likely to visit baited areas (Sanderson 1966; Johann et al. 2020).  Periods of drought, as well as higher average temperatures, can also concentrate feral swine closer to permanent water sources where control efforts can be enacted.  By implementing baited control efforts near water sources during such times, overall abatement success could improve.

Landowners and natural resource managers worldwide continue to determine and refine how different control methods can best be optimized for their specific situation.  While this can often be a function of trial and error over time, understanding the biology and behavior of animals is important.  Factors including available moonlight, relative humidity, atmospheric pressure, temperature and resource availability are among many variables that can influence movement times and behavior activities independent of human influence.  At the same time, the biological tendencies of wild pigs to concentrate near water sources to thermoregulate as well as their overall preference for nocturnal activity provides common-sense insight on good starting points for the enactment of management strategies.  While any effort to reduce the numerous negative impacts on water quality, agricultural production, habitat and native species is merited, abatement efforts selected for and timed around the most likely activity patterns and spatial tendencies of feral swine remains beneficial in the reduction of both wild pig numbers and damages.