Map of the Month: Herps of Texas

Map of the Month: Herps of Texas

As a native Texan, I measure road distance in time instead of miles. Many memories growing up include the dreaded holiday drives to visit relatives in Dallas (9 hours), Houston (5 hours) or even the Valley (3 hours). Lucky for kids today, being stuck in the car with your siblings isn’t so bad thanks to the increased speeds and added highways and toll roads that have been emerging over the past few decades—Distance sure seems shorter when blowing down SH 130 going 85 mph!—The ironic thing is, these same roads that offer us multiple connections to our families and friends across the state do the exact opposite for our co-inhabitants in the wildlife world. While adding more miles of roadway to our state’s footprint has been necessary to accommodate our growing population and alleviate traffic congestion, it certainly adds to ecological challenges by increasing habitat fragmentation and alteration and certainly wildlife-vehicle collisions (WVCs).

While driving down the seemingly endless roadways in the state may not bring to mind ecological ramifications of increased pavement to the average driver, the Texas Department of Transportation (TxDOT) is taking on a proactive role in transportation planning with wildlife in mind. This stems not only from WVCs being a serious public safety concern but also the fact that many threatened and endangered (TE) species along with Texas Parks and Wildlife Department’s (TPWD) species of greatest conservation need (SGCN) are negatively impacted  by roads. Once a species is under listing status, or if TPWD elevates its conservation ranking on the SGCN list, protection is warranted and TxDOT may be required to engage in mitigation efforts in areas where traffic is identified as a threat, generally resulting in project completion delays and increased budget needs. Being able to better predict and prioritize places where increased WVCs are likely to occur, especially involving SGCN species, is an important step in TxDOT planning efforts.

herpetology noun  her·​pe·​tol·​o·​gy | : a branch of zoology dealing with reptiles and amphibians

Recently, NRI’s “Herp” team, led by Drs. Wade Ryberg, Toby Hibbitts and Danielle Walkup embarked on a state-wide GIS-based analysis to create “heat” maps, using existing TxDOT roadway segments, where transportation will likely impact reptile and amphibian species on the SGCN list. Key components to this analysis were pinpointing a specific species presence, their location, and time of intersection with roadway segments as well as whether individuals were alive or dead on the road. This required accurate, long-term data from across the state, a sizable sampling feat considering state funding and time constraints.

Through its “Herps of Texas” project, iNaturalist has collected and stored a database of scientists and citizen scientists’ herp observations which include the geographic coordinates, proposed species’ identification, and in some cases, an uploaded photo. This robust database allowed NRI researchers to gain access to over 60,000 observations from across the state dating back as far as 1972. Through photo verification our team was able to confirm approximately 12,500 observations of 62 SGCN species, determine if they were dead or alive, and incorporate these data into the TxDOT mapping analysis. 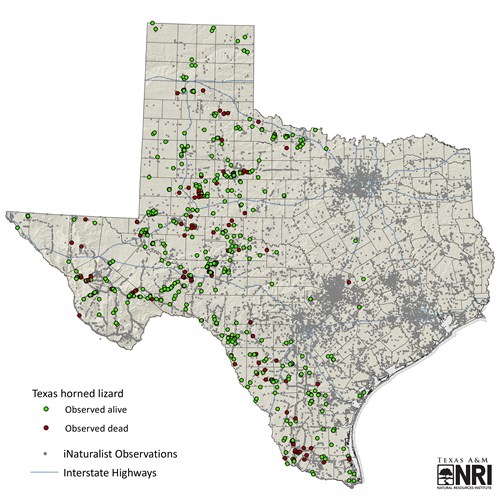 This month’s featured map shows how a specific species of interest can be pulled out of the dataset to be analyzed. For our example, we chose to highlight the iconic Texas horned lizard (Phrynosoma cornutum). This species is frequently spotted sunbathing in open, rocky areas and often times on roadways due to their need for bright sunlight to produce vitamin D. As the map suggests, this behavior can result in road mortality throughout most of the lizard’s range in Texas. Observations of the lizard have been made mainly in the western portion of the state, and increases as they become more active in May and June. 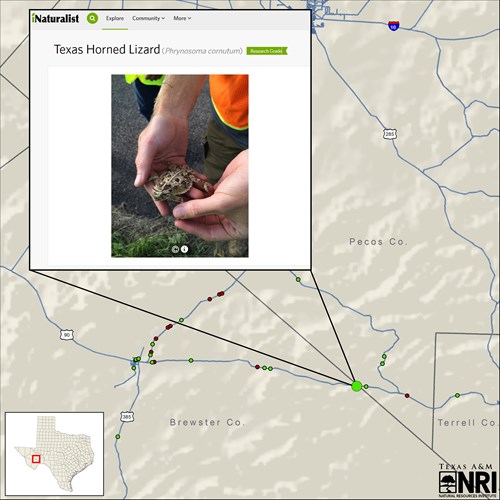 Want your wildlife observations to be used by managers and researchers? Join the iNaturalist community and begin contributing to citizen science. Check out our past blog that describes the iNaturalist app and ways to use it. Observations made by participants help scientists, like our herp team, address conservation issues affecting our state and beyond!

Kevin Skow provides mapping support and serves as the lead for several projects within the institute. He conducts analysis and data management and supports other needs focused on natural resource issues.

Before joining NRI i…