“Does anyone know this animal?”

It’s a question I often pose to kids who come by my booth when I promote quail conservation at conferences and events. There’s so much excitement at these gatherings—colorful displays, games, candy, and FREE STUFF—that it’s a wonder they pause in their frantic exploration of the show floor to speak to me at all, but they do! The reason is obvious to anyone walking by: they stare wide-eyed at the little brown creature, round with distinctive black and white facial markings, which I hold in my hands—a wild thing that contrasts sharply with the artificial environment of the exhibit hall. They’re usually eager to answer my question. 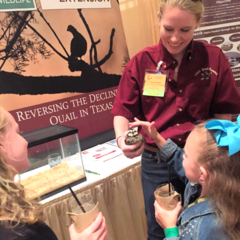 “A bird!” they shout with confidence. They’re right of course, but I want specifics.

“Yes, but what kind of bird?” I press. Nine times out of ten, they have no clue—despite the fact that this bird is a native Texas species, and an important one among grassland birds. From there we can examine the bird together, looking at the shape of his wings, his feet, his beak, to come to the conclusion that it isn’t anything like a raptor or a duck or a dove, but rather more like a miniature chicken. It’s actually a northern bobwhite quail; his name is Kirby, and he’s an animal ambassador for the Reversing the Quail Decline Initiative.

Kids certainly aren’t the only ones who are enthralled by Kirby Quail. I’ve found he attracts visitors of all ages and backgrounds, folks who approach wanting to meet him, to take pictures, or to learn more about the species he represents. He is a guaranteed conversation starter, and the questions people have about Kirby tend to transition easily into lessons about bobwhites in general. One of the most common questions asked, for example, is “How old is Kirby?” Four years, if you’re wondering. The really remarkable thing is how Kirby’s age contrasts with the average lifespan of a wild bobwhite, which is only around 6 months to 1 year. People are usually shocked to find that out; then we can talk about why that is, what kinds of challenges they face in the wild and, ultimately, why their conservation is so crucially important. 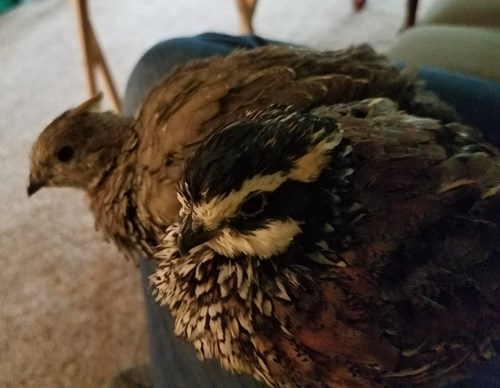 The concept of an “animal ambassador” is certainly nothing new; zoos and aquariums have known for a long time that giving people a closer, more personal look at animals is a great way to foster emotional and cognitive connections. Studies have found that, among 4th and 6th graders, the use of live animals improved student learning and fostered a positive attitude toward the ambassador species (MacMillien 1994; Sherwood et al. 1989). Similar gains have been observed in zoo-goers as well. Visitors who were given opportunities to have active, more direct experiences with zoo fauna were found to have improved perceptions of the target species and conservation in general (Swanagan 2000). The impacts aren’t just feelings, either; these campaigns can also persuade guests to adopt long-lasting conservation behaviors (Mann et al. 2018). Telling people why they should care about animals is one thing, but direct interaction seems to go a long way toward helping that idea take hold.

Despite the potential benefits of using an animal ambassador, the practice—and Kirby the Quail in particular—have garnered some valid concerns and criticisms. One of the most relevant questions in this case is whether the act of introducing people to a friendly, cuddly, cute quail is going to turn them off to the idea of hunting them. Some of you are shaking your head in dismay at that prospect, and some of you are cheering internally—that is exactly why these are some of the most teachable moments in wildlife outreach. They are perfect opportunities to educate people on how conservation is achieved.

Do you know where the money to fund conservation comes from? Perhaps we should back up first and examine what’s meant by that question—what does it mean to “fund conservation?” There are all kinds of activities that could fall under that banner, but some examples include paying my salary and those of other educators who work on similar projects, supporting research focused on declining species, hosting programs that teach people how to manage and conserve habitat, creating resources (e.g. articles, videos, etc.) that inform people about these topics, and other efforts. In the case of quail in Texas, the money that makes this possible is generated largely by the Pittman–Robertson Act, which taxes the sale of firearms and ammunition to fund the management of game animals and their habitats, as well as the sale of hunting licenses and associated stamps. In short, hunters are footing the majority of bill.

Sometimes people start the “conservation conversation” without knowing these facts but with a strong repulsion to the idea of hunting. They look at Kirby and say, “How could anyone possibly hunt these animals? It’s cruel!” I make a great messenger in those instances, because I am NOT a hunter—I’m a bird watcher, and frankly, I look the part. So when I tell them that hunting is actually one of the best ways to help this species we love, and that hunters are valuable allies to conservation because they also love the bobwhite in their own way, it seems to resonate. I can’t say definitively that no one has ever sworn off hunting forever because they met Kirby, but I suspect that the people who are most enthralled by my bird are generally not the same ones who are destined to carry on our hunting heritage. They are usually people—voters or future voters—who never had a single thought about bobwhite prior to our meeting, but who now have a positive and memorable experience to draw upon.

Another common question relates to Kirby’s origin and care. First and foremost, rest assured: no wild bobwhites were harmed in the story of Kirby Quail. He was hatched from an egg acquired from a breeder, and since that time he has been accustomed to handling, travelling, and general human interaction to ensure that his job as an ambassador is as low-stress as possible. If you’ve ever had the opportunity to handle a wild quail, or even one raised with a hands-off approach, the difference is immediately obvious: while Kirby will sit calmly in human hands, a “wild” bird will flail violently to escape your grip, which is why experienced handlers know to keep the wings pinned close to the body to prevent harm. That’s not to say Kirby never has off days. When he shows signs of stress, or fatigue, or just general grouchiness, he goes off display, no questions asked. His health and safety are always top priorities.

Now that Kirby is getting older, he has a younger “sister” as an understudy—Bonnie Blue, a scaled quail (another native Texas species, also from a breeder). Although she is more energetic and curious than her big brother—it’s not clear whether the differences are due to her age or her species—she is also proving to be just as receptive to human interaction and is shaping up to be another excellent ambassador. She will also enjoy the same care and attention that have allowed Kirby such a long and productive career. 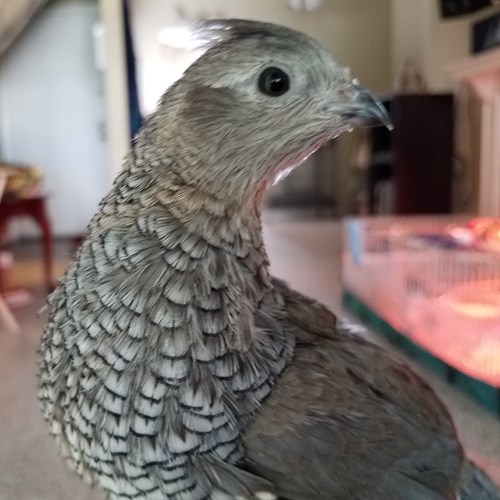 Of all the people who visit the Reversing the Decline of Quail Initiative booth, there’s one type that really stands out: older folks are delighted just to see a bobwhite quail. They share memories of times when, growing up in rural Texas, they would see birds just like Kirby running up and down the dirt roads, or flush a massive covey while walking through a field, or hear that characteristic “poor, bob-WHITE” whistle call echoing all around them in the grass at daybreak. Many come to the realization that it’s been a long time since they’ve experienced any of those things. Some are eager for answers, so we have a discussion about where the quail have gone; others seem content to stroke Kirby’s feathery chest and contemplate that sad fact, and that’s okay too. Either way, it seems like when they leave, they’re thinking more about this little brown bird than when they arrived: about its ecology, its life, its significance, and most importantly, about its decline and how to stop it.

Amanda Gobeli is an Extension associate at the Texas A&M Natural Resources Institute. She is currently working on the Reversing the Quail Decline Initiative (RQDI), a conservation program which seeks to address the decade…