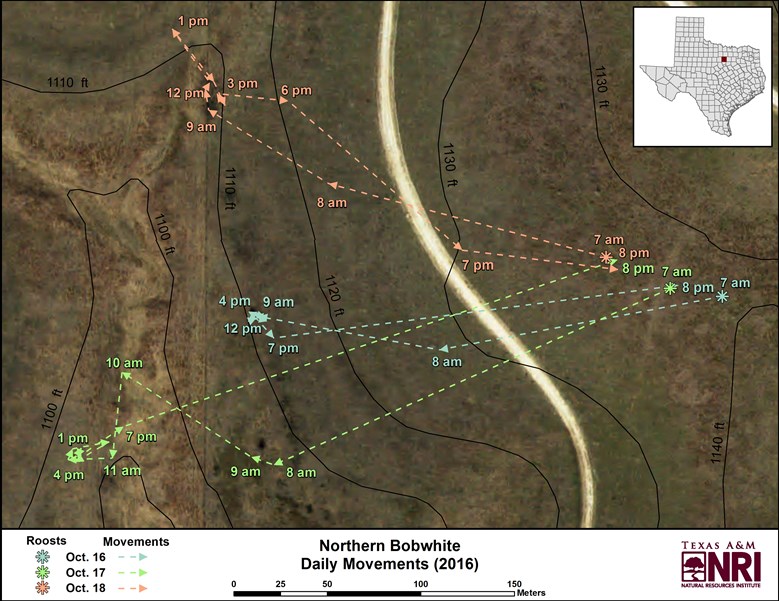 A Day in the Life of a Northern Bobwhite

Many wildlife species have complex behaviors and utilize their habitat in ways we still do not fully understand. While the mysteries of the wild intrigue most any outdoors lover, they do pose challenges when it comes to the management of sensitive or declining species.

Quail in Texas, more specifically the iconic Northern Bobwhite (Colinus virginianus), are among the species we still have much to learn. While small in size, this bird plays a big role in ecosystem dynamics and is often dubbed the “canary of the prairie,” as their presence is an indicator for ecological health. Despite public interest and general affinity for the bobwhite, populations continue to decline throughout its historic range, concerning landowners, scientists and wildlife enthusiast alike. Many research efforts, such as the Reversing the Decline of Quail in Texas Initiative, are underway to better understand and promote conservation and land management activities to help this vital species.

Tracking technology has been at the forefront of major quail research discoveries, as it allows researchers to access a quail’s day-to-day movement and fine scale habitat use. Many studies use GPS transmitter technology, a relatively recent advancement in wildlife tracking, which allow researchers to directly download daily quail movement data from a remote location. Once downloaded and processed, the data can be mapped out to describe a story of the quail’s daily whereabouts, including time spent in different locations. From here, data is paired with on-the-ground realities, such as habitat cover type and density, to help draw conclusions on how quail interact with their environment.

Our Texas Land Trends program group created this month’s featured map to display the movement of one GPS collared Northern Bobwhite over a three-day period in October. Let us review the map to see where and why this quail moved.

All in a Day’s Work

With the completion of nesting season, quail are now starting to form groups of 15-20 birds called coveys. This behavior helps the individual and the group by having multiple pairs of eyes surveying for predators, and during the colder months they can also huddle in a circle to keep warm at night. The birds roost on the ground among grasses and scattered brush forming a ring with their tails pointing inward and heads pointing outward, providing 360 degrees of predator spotting. 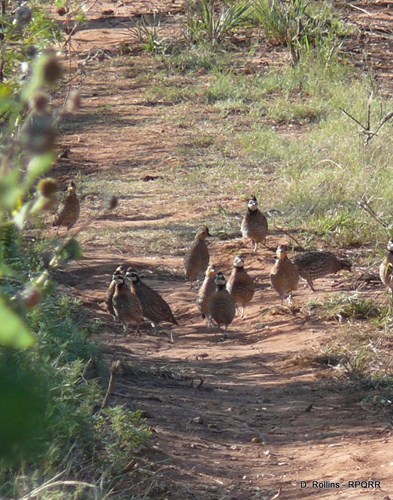 It is now 7 a.m. and time to stir and leave the roosting area (located on a ridge for this particular covey). When the covey wakes up in the morning, one or two of its members will sound off for a few minutes with a “covey call.”  This is what biologists listen for in the fall to help monitor populations. 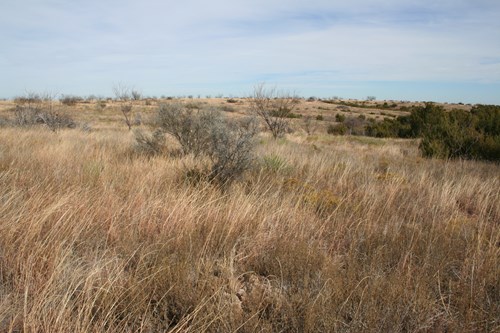 As the morning progresses (~8 a.m. to 12 p.m. on the map) the quail moves down the valley to begin foraging. Heavily dependent on the weather (e.g., temperatures are not too low or it is not actively precipitating), they will begin searching for seeds, insects and green vegetation such western ragweed (a fall favorite) for a good portion of their day.

Once the quail’s crop (a pouch for storing food at the base of its throat) is full, it will seek out loafing cover to rest and safely digest its food. Foraging is a dangerous activity for a quail, as the bird is distracted and exposed to predators during that time, so minimizing time spent looking for food is ideal. Suitable loafing cover is often characterized by dense brush and shrubs (1-3 meters in height) with a closed canopy and open base, perfect for concealing a covey from above while allowing them to scan for ground predators. 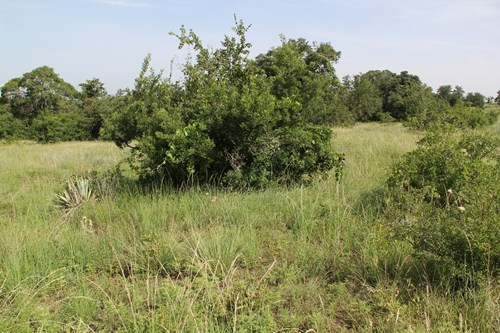 By 7 p.m., the quail decide they’ve spent sufficient time foraging and loafing, and begin their journey back to a favorite roosting area for the evening. During nesting season, quail will roost in the same location in order to stay with their eggs. Since nesting season is over by October in Texas, this quail chooses to move its roost slightly every night, helping avoid predator detection. The quail “circles up” with its covey and the covey sleeps until sunrise the next morning. 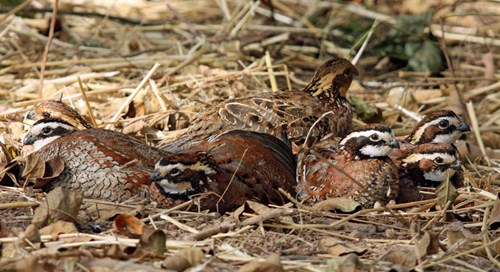 Over this three-day span, our tracked quail traveled approximately 547 meters per day, only venturing out about 265 meters from the respective roosting locations. This highlights the limited range in which quail generally traverse, emphasizing the need for good, diverse habitat in a relatively small area to fulfill the quail’s daily life needs.

Managing your land to accommodate quail often benefits other important species as well, such as native pollinators, grassland songbirds and reptiles. It is also possible to manage for quail habitat while also fulfilling other land use goals, such as cattle production. Check out the resources below to learn more about quail and their habitat, management tools and techniques, as well as the latest research in the following resources.

Funding for this project was provided through the Reversing the Quail Decline in Texas Initiative and the Upland Game Bird Stamp Fund based on a collaborative effort between Texas Parks and Wildlife Department District 3, Texas A&M AgriLife Extension Service and Louisiana State University.